Established in 1990, The Billfish Foundation’s Tag and Release Program is the largest private billfish tagging database in the world and the cornerstone of TBF’s conservation and advocacy efforts. With more than 260,000 tag and release reports, TBF receives thousands of tag and release records annually from across the globe and provides vital information for billfish conservation.

The success of TBF’s Tag and Release program is contributed to the dedicated anglers and captains around the globe that voluntarily tag, release, and report their billfish catches. The deployment of traditional tags and the data gathered from recaptured billfish provides valuable scientific data to further understand growth rates, migratory patterns, habitat utilization, and post-release survival rates. Tag and release data also provides valuable information for stock assessments that are instrumental in a time when industrial longlines represent the largest source of marlin mortality. This valuable data, much of it impossible to measure without the use of traditional tagging, provides the groundwork for conservation minded policy, scientific advancement, and gives insight into the demographics and socio-economic benefits generated from billfishing.

As tagging provides The Billfish Foundation with substance for its conservation efforts, TBF recognizes those anglers and captains that tag and release the most billfish each year at an awards ceremony at the Miami International Boat Show. The annual International Tag & Release Competition recognizes members who tag and release the most billfish by species in each of the world’s oceans. TBF award winners are the ‘who’s who of the billfishing world’ and are those that do not just catch and release a great number of fish, but embody and share a common conservation ethic. As captains and anglers on the water represent the first line in billfish conservation, recognition of their efforts provides a means to illustrate the direct link between catch and release fishing and marine conservation. To recognize the efforts of all of its members, TBF also provides release certificates for those that report billfish tags and releases.

For a comprehensive guide to filling out tag cards, click here.

AFTER THE FISH IS LEADERED: 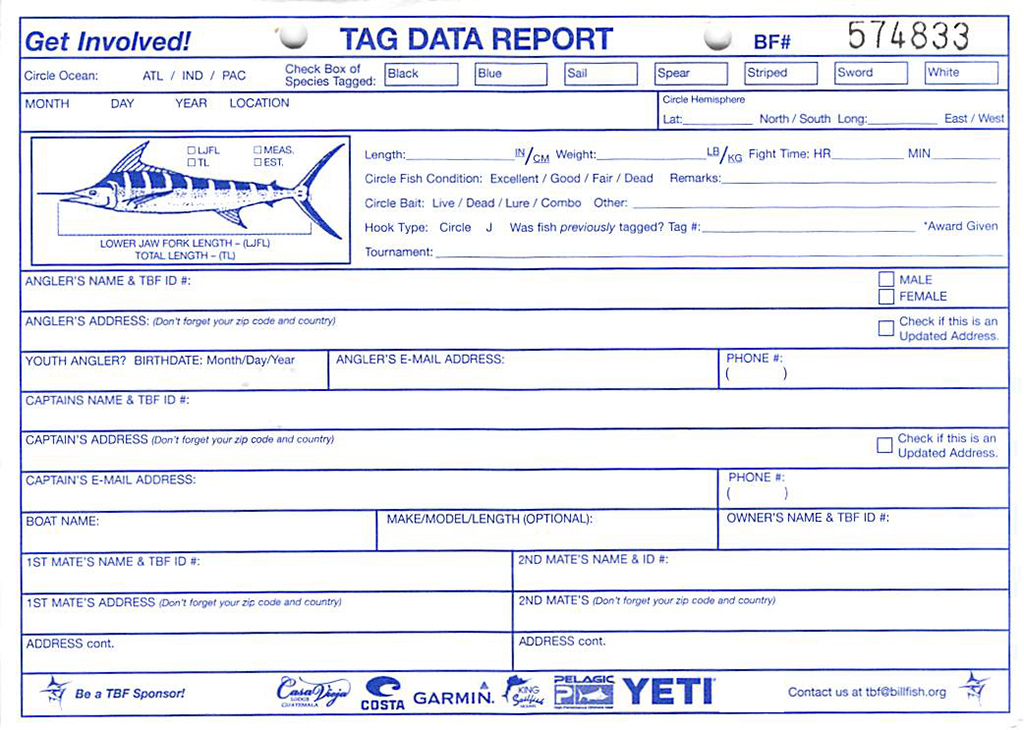 What To Do If You Catch a Tagged Billfish

How To Make A Tag Stick

In some places you can buy pre-made tagging poles. If not, the best ones are made from old broom or mop handles. They are made of hardwood about 1.5m (approximately 4 ½ feet) long and 2.5cm (1 inch) in diameter which makes them sturdy and reliable.