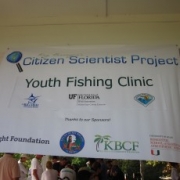 Do you remember the first time you tied your first knot or caught your first fish? On April 7th 2013, young people and their parents did just that with the Key Biscayne Community Foundation (KBCF) Citizen Scientist Project at Bill Baggs State Park in Key Biscayne, Florida. Multiple stations were set up for the kids with the goal of creating ethical anglers by teaching the basics of sportfishing and by educating them on their local environment.

The kids learned how to identify and measure fish as well as distinguish whether or not to release the fish based on its species and relative size. By gaining this knowledge, these future junior anglers become aware of a scientific component of sportfishing. Sustainable fishing practice, such as selecting specific sized fish and reporting your catch, will promote the conservation of these species. Other skills the children acquired during the day were knot tying, casting, and rod building. The Billfish Foundation’s (TBF) Peter Chaibongsai and Roxane De Waegh introduced the public to what billfish were and TBF’s tagging program. They learned that anyone could participate in citizen science by tagging, releasing, and reporting their catches. The kids (and parents) were astonished to learn that they could possibly track the same fish years later, on the other side of the world, and observe the many physical and biological changes their little fish has grown to endure.

The collaborative efforts of the KBCF, the Village of Key Biscayne, the Knight Foundation, TBF, the Rosenstiel School of Marine and Atmospheric Science, and University of Florida Miami-Dade County Extension Sea Grant resulted in a huge success with over 100 kids and parents attending the event. Engaging the local organizations and the community to create ethical anglers and future environmental stewards is one of the goals of the KBCF Citizen Science Project. By creating an opportunity for residents to actively participate and learn about their island’s resources, Key Biscayne’s ecosystems will be better understood and protected.

Get up to date information on events, news, and research on a constant basis. Submit your email now to join our exclusive newsletter.
U.S. – Implementation Challenges for The Billfish Conservation Act

TBF IN TURKS AND CAICOS ISLANDS
Scroll to top