WHITE MARLIN AS THREATENED OR ENDANGERED SPECIES NOT WARRANTED BY NMFS 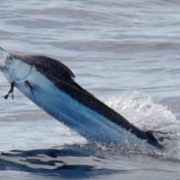 On January 30, 2013 the National Marine Fisheries Service (NMFS) released the 90-day finding on the two petitions received from Mr. James Chambers and the Center For Biological Diversity (CBD) to list white marlin (Kajikia albidus) as an endangered or threatened species. NMFS concluded “these petitions do not present substantial scientific or commercial information indicating the petition action may be warranted.”

Previously petitioned by the same parties in 2001, NMFS determined that white marlin did not warrant listing according to the Endangered Species Act (ESA). The possibility of white marlin listed as threatened or endangered also occurred in 2006 following the International Commission for the Conservation of Atlantic Tuna (ICCAT) stock assessment for white marlin. As a result of a settlement agreement between NMFS, the CBD, and the Turtle Island Restoration Network, NMFS conducted the Atlantic White Marlin Status Review (AWMSR) and determined that the white marlin was neither threatened nor endangered.

The 2012 petition by the two parties, isolated the ‘North Atlantic sub-population of white marlin’, but NMFS declined their claims of sub-populations and determined that “the best available information indicates white marlin are a single species through its range without separation into populations.” NMFS evaluated the information presented in the petitions in addition to best available information in their files to determine whether there is a concern for impacts and threats that may be posing risk of extinction for white marlin. The petition stated three of the five possible factors of section 4(a)(1) of the ESA by looking at whether there was “(A) present or threatened destruction, modification, or curtailment of its habitat and range; (B) overutilization for commercial and recreational purposes; and (D) inadequacy of existing regulatory mechanisms.  NMFS determined that there was not substantial information warranting a listing under ESA to any of these three claims.

This is an important issue for both the recreational and commercial fishing industries because of the negative impacts potentially resulting from a listing of either endangered or threatened for white marlin under the Endangered Species Act.

Get up to date information on events, news, and research on a constant basis. Submit your email now to join our exclusive newsletter.
BIG GAME ROOM CELEBRATES 10 YEARS WITH CAROLINA SKIFF AND THE BILLFISH FOUN...

‘A Night in Atlantis’
Scroll to top