VICTORY FOR MARLIN IN NEW ZEALAND 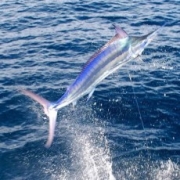 A recent decision to prohibit the commercial harvest of marlin in New Zealand waters represents another victory for billfish conservation. Last year a reevaluation of the management of billfish and tuna species in New Zealand was undertaken with the possibility of introducing marlin (blue, black and striped marlin) into the quota management system. This would mean that an estimated 25 metric tons of marlin caught commercially could be potentially harvested and sold commercially each year. Fortunately, the Minister of Primary Industries, recognizing the importance of billfish to New Zealand’s sportfishing industry has decided to not include marlin into the quota management system and maintain their status as recreational only species.

New Zealand is recognized the world over as a premier location for billfish and especially striped marlin. In fact, 20 of 22 line class records currently held for striped marlin have been caught in New Zealand waters including a 494 pound all tackle world records. Several of some the top billfishing captains in the world also come New Zealand including TBF award winners Marty Bates, John Gregory and Graeme “Bonze” Fleet.  Sportfishing in New Zealand has grown to support more than 100 charter businesses and generates an estimated NZ$90 million annually. Anglers in New Zealand also do their part to help conserve billfish through tagging programs, practicing catch and release, and even go beyond government regulations by self-imposing size limits for billfish.

The greatest threat to striped marlin stocks in the western Pacific are the estimated 1,305 distant water longline vessels predominately from Japan, Taiwan and Korea which target albacore tuna.  Assessments have indicated declining numbers for striped marlin and that stocks are in the brink of overfishing.  Since record seasons in the early 90’s New Zealand fishing clubs have seen decreasing catch trends and some charter businesses predict they will no longer be able to operate if catch rates worsen. Fortunately, New Zealand has made a responsible decision by prohibiting the commercial harvest of marlin.

Since 1987 there has been a ban on the commercial harvest of marlin in New Zealand and TBF is glad to see that this will continue. New Zealand’s decision to prohibit the commercial catch of marlin also represents the growing trend of nations recognizing the socioeconomic importance of sportfishing and ensuring that billfish species are conserved for anglers to enjoy. Sportfishing organizations in New Zealand are also taking additional actions to protect billfish and working to establish a ban on the estimated 4.5-5 metric tons of billfish imported into the country annually. An economic assessment of the striped marlin fishery in nearby New South Wales, Australia, has shown that the recreational and charter sectors generates an estimated AUD$112 million annually compared to a mere AUD$5 million for the commercial sector. A prohibition on all billfish imports would follow after the precedent set by the by Billfish Conservation Act (BCA) that was recently established in US. Like the BCA in the states, prohibiting billfish imports in New Zealand faces the challenges of existing trade agreements, monitoring and tracing the origin of imports. For more information on New Zealand’s billfish management and the BCA please contact TBF or see our advocacy page.

Get up to date information on events, news, and research on a constant basis. Submit your email now to join our exclusive newsletter.
TBF’s Tag and Release Program

STUDENTS LEARN ABOUT THE “OTHER SIDE” OF SPORTFISHING
Scroll to top