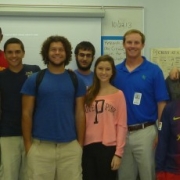 In October, the students in South Broward High School’s Marine Policy class participated in their annual mock debates about billfish policy as they worked together to create a management plan for billfish in the United States. Groups of students represented different stakeholders in the fishery such as recreational fishermen, commercial fishermen, environmental groups, scientists, and government officials as they debated on how to implement increased conservation measures for billfish. TBF’s Andrew Cox attended the final day of debates where the students finalized their positions and came to a conclusion for a new management plan. Students were given insight and feedback on their proposed management plan and how many of the items suggested were things that TBF is currently working on such as increased gear restricted areas and catch caps on billfish. TBF is looking forward to next year’s billfish debate!

Get up to date information on events, news, and research on a constant basis. Submit your email now to join our exclusive newsletter.
Bermuda – Potential Marine Reserve Could Stop Fishing in The Blue Marlin...