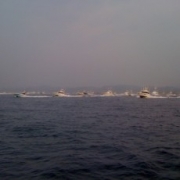 On July 25-28th, TBF’s Peter Chaibongsai took part in the Japan Game Fish Association’s (JGFA) Japan International Billfish Tournament (JIBT) off of Shimoda, Japan. Located several hundred miles south from Tokyo, Shimoda, Japan is known for the US Navy opening up trade between nations in the mid-19th century. The JIBT, in its 35th year, pits the best Japanese billfish anglers against one another in a friendly tournament – with the only thing on the line is pride and bragging rights on who is the top billfish boat . While the JGFA holds billfish tournaments on almost every weekend in the summer, the JIBT is the largest attended. This year over 100 boats and 600 participants took part in the tournament which has a minimal entry fee of about $1000 dollars.

During the tournament, Chaibongsai was welcomed by the JGFA and met with their directors and executive officers. The purpose of TBF’s visit was to reestablish communication between the groups, especially since the group has continued to be a staunch supporter of TBF’s Tag and Release Program.  Recently, a Japanese angler and/or captain has won a Tag & Release award from TBF in three of the past five years.

Some JGFA members have continued to use TBF tags since the early 1990’s, which is quite a feat. Moreover, in JGFA’s fishing museum, where they proudly display Japanese billfish records, they also prominently show and discuss the importance of TBF’s tagging program in billfish conservation. With this in mind, TBF has recently seen a number of their tagged fish showing up in a number of places like off of Taiwan and the South China Sea.  The parties also discussed other ways to continue to reestablish regular communication (outside of the Tag and Release program) and following the meeting everyone came out excited for the future.

The tournament was lively every morning with a shotgun start and with everyone coming back to the dock by early evening and be recognized for what they caught, tagged and released. The format of the tournament is to tag any billfish under 100kg or about 220 lbs. Over 40 billfish, including blue, black and striped marlin, were tagged and released safely over the 3 days of fishing. On the first day of the tournament TBF presented the first 10 boats that tagged and released a billfish a TBF tag flag, magazine and sticker as a small gesture of thanks. During the awards ceremony TBF was recognized and Chaibongsai spoke to the participants and presented the JIBT’s Top Tag & Release boat to Team Bonita.

TBF would like to thank the members of JGFA for the invitation to attend the JIBT, to Mr. Higashi for his assistance, and Team Forward for their hospitality. TBF is anxious to work with JGFA and to come back to Japan and build upon the discussions during our time there.

Get up to date information on events, news, and research on a constant basis. Submit your email now to join our exclusive newsletter.
SAILFISH BREWING COMPANY’S TAG & RELEASE AMBER FESTIVAL