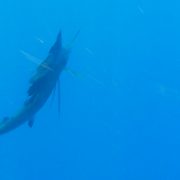 Humans have known for centuries that fish are attracted to floating objects. Fishermen have taken advantage of this behavior by fishing around palm fronds, seaweed patches, and any debris that may be found in the open ocean. Theories for the behavior vary from protective sheltering to following food to stock enhancement, all attributable to the floating object. More recently, this behavior has been utilized by both the commercial and recreational sectors seeking large pelagic species, usually found scattered throughout the vast ocean. If a floating object attracts these fish, then it’s a floating object we’ll use to catch them.

Fish aggregating devices, known as FADs, are becoming increasingly popular for catching highly migratory fish such as tunas and billfish. Drifting FADs are used in the Pacific by the tuna industry, while anchored FADs are used in Australia by recreational anglers as well as in the Caribbean by artisanal fishers. It’s a foolproof strategy: deploy a FAD in an area where pelagic species travel, wait for the fish to congregate, and then watch as the catch yields marlin after marlin or school upon school of tuna.

The commercial tuna industry sees FADs as the future of the fishery, while artisanal fishers in lesser-developed nations utilize FADs for food and survival. Recreational anglers, however, seem to be torn between the allure of a guaranteed Grand Slam and the notion of diminishing the challenge that is sport fishing.

Whatever your stance on the sport of it, it’s hard to deny the uncertainty. With thousands of FADs being deployed into the oceans each year, we simply do not know the impact. Are there truly more fish to be caught, perhaps populations are increasing due to the aggregating behavior? Or does it just seem that way because all the individuals have congregated in this particular location? There is also the possibility that FADs may affect migratory patterns as fish learn to avoid the hundreds of objects in their route, or oppositely, are so attracted to the FADs that they fail to move on. In addition, FADs have been blamed for contributing to the expansive problem of marine debris. Very rarely are drifting FADs retrieved, and those that are anchored often break free from their line in rough weather or due to a ship strike, leaving the nets, cables, and buoy materials to freely float through the sea until sinking or washing ashore.

Social relationships can also be strained amid FAD fisheries, as multiple users have an interest in catching the same collection of aggregated fish. Conflicts arise in places such as the Caribbean, where recreational anglers compete with artisanal fishers for the same resource. FADs purely for recreational fishing have had success in Australia, but all anglers adhere to a national FAD Code of Conduct in order to avoid disputes on the water.

The Billfish Foundation calls for a collaborative management effort in FAD fisheries. The drafting and implementing of plans should be inclusive of all sectors, and address not only the environmental concerns but also the social repercussions that have been witnessed elsewhere. It is important to draw from success stories as well as examples of warning in order to develop FAD management strategies that are participatory and fair. While FADs offer an efficient means of catching elusive migratory species, their rapid deployment should come with a word of warning that we are in uncharted waters.

If you’d like to see more research on FADS, become a member to support our work and have your voice heard.

Get up to date information on events, news, and research on a constant basis. Submit your email now to join our exclusive newsletter.
Florida’s Saltwater Industry Back In Business After Irma