TBF BACK IN THE CLASSROOM 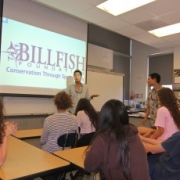 Not many people want to go back to school, one time through is enough for many, but that is exactly what The Billfish Foundation’s Peter Chaibongsai did last week at the La Jolla Country Day school in La Jolla, California. TBF was invited by Mr. Christopher Uyeda, a science teacher, to present to several classes on the importance of the conservation of recreational fish stocks and why programs like TBF’s Tag & Release program are essential for billfish conservation.

Chaibongsai spoke about TBF and our mission to conserve billfish populations worldwide as well as those communities dependent on healthy billfish (and their associated species) fish stocks. While many have never heard of billfish initially, they all could make the connection when Chaibongsai explained that it was the same type of fish from Hemingway’s “The Old Man and the Sea.” The students were enamored to find out that these fish begin their lives as tiny plankton and can grow to over 2000 lbs.

TBF’s Tag & Release program was then discussed and how the public can assist scientists and policy makers to the conservation of these important fish. Chaibongsai showed them why they tag fish, how it is done, and why they do it. Students were surprised to hear that how many stakeholders could be involved in recreational fishing, the money invested in the sport, that over 170,000 tags have been deployed on billfish and how far they can travel. By the end of the presentation, the students understood that the learning more about billfish (through tagging, releasing, and reporting) and their conservation were important to the economy, since many livelihoods are dependent on them.

Not a bad afternoon back at school. TBF would like to thank Mr. Uyeda and La Jolla Country Day for the invitation to come to the school and hope to see some of these students out on the water soon!

Get up to date information on events, news, and research on a constant basis. Submit your email now to join our exclusive newsletter.
Stock Assessment Science and Methodology