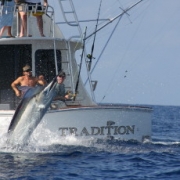 Australia’s proposed network of marine reserves is threatening to close off close to a million square kilometers to anglers, but fortunately, several scientists and organizations have been working to try and stop this from happening. A recent publication by Professor Robert Kearney in the Open Journal of Marine Science has echoed many of the points made by TBF and that the closures of vast marine zones are not logical or necessary for Australia to protect its marine resources. By some estimates, implementing these reserves will mean economic losses totaling in the billions, yet they will do little to protect from the true threats to Australia’s marine habitats. Not only is it not sound management but it is unfair to anglers and all Australians.

Australia’s fisheries management has consistently ranked among the best in the world by several independent reviews and has a history of effectively and sustainably managing its resources. In 2004, stock assessments indicated that overfishing was occurring in close to 40% of Australia’s managed fisheries. Just two years later in 2006, the percentage of overfished stocks was slashed to just 11%. Accomplished through traditional management practices of regulating catches and controlling fishing effort, the recovery of these stocks demonstrates the effectiveness of Australia’s fishery management as well as the resilience of marine species to recover from an unhealthy state. At both the national and state level, fisheries management in Australia focuses on conservation as well as promoting the sustainable use of marine resources.  So why then is Australia shutting out important user groups like anglers and forfeiting socioeconomic opportunities when they do not pose a threat to the conservation of marine resources?

Many argue that the push for marine reserves is largely due to the influence of environmental NGOs and the failure of the country to inform the public on the true nature of the issues at hand. Many NGOs do not care to take the time to inform the public that almost all fishing practices (especially sportfishing) in Australia are sustainable and well managed. Instead, environmental NGOs with imposing media campaigns have misconstrued the facts and portray a “doom and gloom” message that all forms of fishing are a threat to the marine environment. Unfortunately, environmental NGOs have led many to believe that the smallest amount of overfishing is the equivalent of an environmental catastrophe and extreme measures like marine reserves are necessary to ensure their conservation. This is all despite the fact that Australia already effectively manages its resources and that marine reserves do not address the real threats to Australia’s marine environment such as pollution or coastal development. Even recreational anglers have been negatively portrayed despite the fact that anglers are conservation oriented and are a tremendous advocate for conservation efforts. In fact, Australian anglers annually generate close to $20 million AUD through the sale of licenses that helps fund habitat restorations, stock enhancements, and enforcement. Additionally, anglers are  significant drivers of local economies through both direct spending and tourism generated from sportfishing. In New South Wales alone, recreational fishing for striped marlin is estimated to have an annual economic impact of $112 million compared to less than $5 million for that of commercial catches of striped marlin.

Currently, Australia imports 70% of its seafood, a figure that is expected to rise given the restrictions placed on fishing by the proposed marine reserves. Importing seafood means exporting the responsibility of sustainable fishing practices to other countries, which for Australia are predominately Asian countries that rank as some of the worst managed fisheries in the world. A dependence on seafood imports also draws into question issues of food security, especially for a country like Australia that is situated near many developing nations with growing demands for protein to sustain their expanding populations. In the Coral Sea Commonwealth Marine Reserve, an area of over half a million square kilometers is posed to shut all forms of fishing and create an annual loss of over 600 metric tons of tuna and swordfish that are harvested each year from this area. The displacement of these catches and highly migratory nature of these fish may mean that these fish will be harvested by nearby countries. Unlike Australia, other countries in the south Pacific do not responsibly manage their fisheries and use unsustainable practices such as those associated with high bycatch of important sportfish like billfish.

There are always two sides to every story and there is an important lesson to be learned from what is going on in Australia: stakeholders such as anglers need to take the time to educate themselves about the issues and work together to ensure that the real issues are addressed. Anglers and other important stakeholders do not have the resources or powerful social media tools of some international NGOs. They do however make efforts to conserve marine resources and make significant contributions to local economies. Unlike commercial longliners, anglers have almost no bycatch, tag and release virtually all billfish. It is unfair for NGOs to negatively portray anglers and to lock out anglers when they do not pose a threat to conserving biodiversity. Australia has demonstrated that it is capable of managing its marine resources so why try to fix something that is not broken.

Get up to date information on events, news, and research on a constant basis. Submit your email now to join our exclusive newsletter.
WELCOME PELAGIC GEAR AS A NEW TAG & RELEASE SPONSOR!