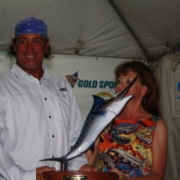 The late Sid Johnson from Trinidad was an early advocate for catch and release of billfish and fought hard to try to get Trinidad to stop allowing the distant-water-fishing nation of Taiwan from using the nation’s port as a major transshipment location.  Johnson was recognized with a Special Achievement Award by TBF in 1998 for his push for conservation, responsible fishing and fighting overfishing from distant-water-nations that overfish billfish, which they kill as bycatch. Johnson later served on TBF’s board of director and was very helpful in keeping TBF informed on issues in the southern Caribbean.

Get up to date information on events, news, and research on a constant basis. Submit your email now to join our exclusive newsletter.
WELCOME BISBEE’S FISH & WILDLIFE CONSERVATION FUND!