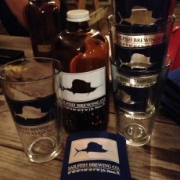 The first annual Sailfish Brewing Company’s Tag & Release Amber Festival was held on July 20th at Sailfish Brewery in Fort Pierce, Florida to bring awareness and generate funds for The Billfish Foundation (TBF). This event was the brewery’s way to help support TBF and to introduce themselves a TBF conservation partner for 2013 and beyond.

As part of their commitment to honor the TBF mission, the owners of Sailfish Brewing Company named one of its most popular offerings Tag & Release Amber.  Sailfish Brewery donated a $1 for every Tag & Release beer sold during the festival to help support TBF’s tagging program. During the event, a silent auction of items was also held to raise more funds for TBF and TBF had discounted memberships for those who joined that evening.  Following the event, proceeds from Tag & Release Amber (as well as their seasonal White Marlin Wheat) will benefit TBF as well.

“We are thrilled to have Sailfish Brewing Company as a sponsor and welcome their enthusiasm to help The Billfish Foundation not just with this event, but by naming one of their bestselling beers after our tagging program,” said Peter Chaibongsai from TBF. Along with this event, we will also be offering TBF memberships and TBF literature throughout the year at the Sailfish Brewpub so local area residents and visitors can easily participate and learn more about our organization.”

Nick Bischoff and Dave BuShea, cofounders of Sailfish Brewing, are both avid sports fishermen who wanted to share their love of the sport and the importance of conservation with others. “From our inception we wanted to give Florida beer drinkers a craft beer that speaks to our unique tastes, hot weather and love of the sea while committing to protect the water that surrounds us,” said Bischoff.  “We created the Tag and Release Amber – an American pale, crystal, with a healthy dose of rye malts brew — specifically to focus on the importance of this TBF initiative,” he said.

Over $1000 dollars were collected from the auction, beer sales, and memberships from the event and TBF would like to thank Sailfish Brewery for hosting this unique and fun benefit event. We are excited to have them onboard as a sponsor and look forward to seeing this relationship blossom in the Florida fishing community. We cannot wait to see and taste more local libations from them! For more information about Sailfish Brewery, Inc. and the Tag & Release Festival go to their website or their Facebook page.

Get up to date information on events, news, and research on a constant basis. Submit your email now to join our exclusive newsletter.
TBF SUBMITS COMMENTS FOR BILLFISH CONSERVATION ACT SCOPING PROCESS