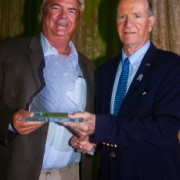 The Billfish Foundation’s most prestigious award, the Rybovich Lifetime Conservation Award, is named in honor of the late John Rybovich, a pioneer in billfish conservation and sportfishing vessel design. This year’s winners represent the marine publishing industry, the field of billfish science and an individual advocate and organizer for advancing responsible fishing.

C.M. “Rip” Cunningham – of Boston, Massachusetts began 41 years ago as an associate editor with SaltWater Sportsman magazine where he educated anglers not only on fishing and boating techniques and products, but equally on the importance of participating in the fishery conservation and management processes. His commitment includes serving nine years on the New England Fishery Management Council where he currently serves as Chairman. Before leaving full time employment at SaltWater Sportsman magazine in 2004, he had risen to the position of Editor-in-Chief. Today he continues to contribute his expertise and commitment by writing the magazine’s Conservation Column. “His commitment to sportfishing and conservation is exemplary,” says John Brownlee, TBF Board Member and the current Editor-in-Chief of SaltWater Sportsmanmagazine.

Dr Julian Pepperell – of Queensland, Australia established the nation’s gamefish tagging program for the New South Wales Fisheries Ministry 40 years ago. The enormous program transitioned Australia’s gamefishing anglers from killing to a predominantly tag-and-release format. Over the years Pepperell has gained distinction as an authority on billfish and other pelagic species, authoring two books and numerous scientific publications. He has had his own research company since 1991 and conducts research in partnership with universities, government, and the private sector. Pepperell also serves as an adjunct professor at several Australian universities. His regular & very popular science column and in-depth features printed in BlueWater Boats and Sportsfishing magazine inform readers about the biology of gamefish and the science relating to their management. Friend and Editor-in-Chief of the magazine, Tim Simpson, says “Pepperell provides a rare gift in his ability to bridge the gap between the scientific community and anglers.”

Herman “Dutch” Prager –of Mandeville, Louisiana returned from submarine duty during World War II and, after seeing a 465.5 pound blue marlin brought to the dock during the Grand Isle Tarpon Rodeo, began a quest to bring big game fishing to his state.  He wanted a big game fishing club established in New Orleans, so with a few other big game fishermen he provided the muscle and drive that in 1961 established the New Orleans Big Game Fishing Club (NOBGFC). The Club’s mission distinguished it from others in that it focused solely on furthering scientific knowledge of big-game fish species by acting as a liaison between anglers and scientists.  Prager was elected President a month later, a position he occupied until 1990, a tenure during which he earned the titles of Club “father, godfather or ramrod.”  In 1962 the Club’s first tournament attracted 46 members and 44 guest anglers and has grown ever since. Dutch and his rules committee established angling rules that are the foundation of the NOBGFC and he insisted that IGFA rules and protocol be strictly followed. TBF is proud to have the NOBGFC as a conservation partner.

Get up to date information on events, news, and research on a constant basis. Submit your email now to join our exclusive newsletter.
SAFE HANDLING PRACTICES