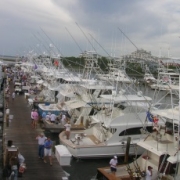 Whether it is billfish, tuna, or sharks, fishing for HMS species means finding blue water far offshore from the dock. Venturing offshore and pursuing big game fish requires larger boats, heavier tackle and presents challenges on the scale of the fish that anglers target. Of course, the bigger boats, specialized equipment, and more fuel needed means offshore anglers pursing species like billfish spend more than the average saltwater angler. For HMS fisheries in the Mid-Atlantic and New England region where fishing grounds can be 30-100 miles offshore and multiday trips are the norm this is especially true. When all of the expenses of an offshore trip are added up, offshore anglers can be a significant economic driver in some regions. While it is certainly not news to charter captains or boat owners that offshore anglers spend a lot of money to catch HMS species, the National Marine Fisheries Service (NMFS) has just released the economic impacts of HMS anglers in the Mid-Atlantic and New England regions that highlights the importance of offshore anglers. It is important to recognize that this study only analyzed the expenditures of private boat owners, excluding charter boats and additional offshore anglers and only reveals a portion of the true impact that recreational HMS fishing have in the region. 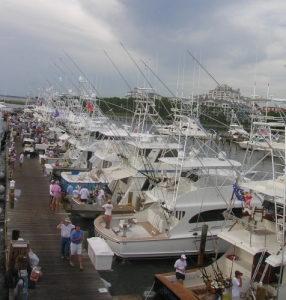 In 2011, NMFS surveyed close to 3,800 HMS Angling Permit holders registered in coastal states from Maine to North Carolina via mail and email. Permit holders were asked questions about fishing related purchases such as boats and tackle (deemed durable goods) as well as additional expenses associated with their last trip offshore (fuel, food, hotel, travel expenses etc.). From the results of the survey, NMFS estimates that in 2011, HMS Angling Permit holders spent $23.2 million on trip expenses and $151 million on durable goods. These expenditures are estimated to have a total economic output of $266 million, generate $153 million (value added outputs), and $96 million in salaries for the more than 1,800 jobs created by recreational HMS fishing from Maine to North Carolina. This may seem like a low value, but it is important to recognize that only HMS Permit Holders were surveyed for this study. Therefore, these results only reflect the economic contribution of private vessel owners because only the vessel owner is required to purchase a HMS permit. The estimate from this study does not include out the expenditure of other offshore anglers who do not own a vessel (i.e. guests on board), but still spend money on trip expenses, as well as the HMS for-hire (charter) sector. Taking this into account, recreational HMS fisheries make a far greater economic contribution than is reflected in this study.

HMS Permit Holders Expenditures in Mid-Atlantic to Maine in 2011

Billfishing in Mid-Atlantic to Maine in 2011

Billfishermen will also be interested to learn that this study has quantified the fact that billfish anglers are indeed a “dedicated following of specialized anglers.” More than half of all fishing trips made by billfish anglers are in pursuit of HMS species unlike anglers targeting tuna or sharks (other HMS) for which HMS trips make up less than a third of all fishing trips. Permit holders pursuing billfish are estimated to have spent $4.6 million over 5,123 days, spending on average more money ($900/day) on durable goods than anglers targeting tuna or sharks. While the total economic output of HMS anglers in the region is only a small fraction of what was generated by all other saltwater anglers in the region, HMS anglers on average spent more than ten times the amount of that spent by anglers targeting all other marine species in 2011.

It’s not exactly news to billfishermen that going after swordfish, sailfish or marlin is inherently expensive, but what use is this information? Socioeconomic studies like this are an invaluable tool for showing the importance of sportfishing and establishing policy that favors recreational anglers. The average congressmen may not have even seen a billfish before, never mind be familiar with the offshore fishing industry. One thing all policy makers understand are dollars and cents. As is put forth in the Magnuson Stevens Act (the guiding legislation for US fisheries) obtaining the maximum economic benefits is an important factor to be taken into account and used to weigh management options. The Billfish Foundation (TBF) has utilized socioeconomic studies in places like Costa Rica, Los Cabos, and Panama. This data was vital in helping these governments recognizing the tremendous benefits coming from sportfishing which was crucial in helping to establish closed areas for longlines and purse seiners and giving visiting anglers an even better fishing experience.

This important data is a tool for anglers and policy makers to promote sportfishing by allowing more access and opportunities for anglers to pursue HMS species. Currently, comments for the Recreational Fishing Policy are being submitted and groups like the Center for Coastal Conservation, an alliance of sportfishing groups to which TBF is a member, are advocating for using economic valuation to determine the best management practices. This vital socioeconomic information is just one way groups like TBF can help ensure that the important contributions of anglers are not overlooked, but recognized and promoted as the sustainable, economic engine that it is. Currently, TBF is working with other parties to obtain funding for a socioeconomic study of offshore, sportfishing in the Gulf of Mexico, another important offshore fishery. For more information on the Mid-Atlantic HMS study or to inquire about the GOM study, please contact TBF at tbf@billfish.org. The complete Mid-Atlantic study can be found online, here.

Get up to date information on events, news, and research on a constant basis. Submit your email now to join our exclusive newsletter.
2014 TAG & RELEASE WINNERS!