PALAU ANNOUNCES A BAN OF ALL COMMERCIAL FISHING 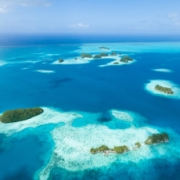 On February 4th, 2014 the president of the Republic of Palau, Tommy Remengesau Jr., announced to the United Nation’s his intention to become the first country to close its entire Exclusive Economic Zone (EEZ) to commercial fishing. Instead of selling their fishing rights for exploitation by foreign nations as done in the past, the 230,000 square miles of water would be managed to encourage marine recreational activities with the focus on increasing diving and sportfishing tourism.

In his speech to the United Nations, President Remegnesau made it explicitly clear that the increased protection for Palau’s EEZ was not intended to do away with all fishing within Palau’s EEZ by stating “Make no mistake, this is not an effort to lock up Palau’s waters and throw away the key.” In doing so he further emphasized “Our economy is our environment and the environment is our economy . . . ending commercial fishing will give nature a chance to heal from what the scientists are telling us is the damage caused by the intensive commercial fishing pressures.  It will also release the vast potential of our waters to provide more food for our people, more fish for the region, and to grow Palau’s economy.”

With these tremendous actions, the President targets diving and sportfishing as drivers of a new and sustainable marine eco-tourism industry for Palau. Blue marlin, black marlin, striped marlin, and sailfish are just a few of the more than 1,300 species of fish, 700 species of coral, and an estimated 130 species of rare sharks and stingrays that populate Palau’s waters.  In fact, Palau’s waters support more coral fish and other invertebrates per square mile of marine habitat than anywhere else in the world….a potential for a true diving and sportfishing oasis.

Ellen Peel, President of The Billfish Foundation (TBF) states, “President Remengesau, Jr. is the boldest national leader in marine management by taking concrete steps to grow a strong sustainable eco-tourism trade through diving and sportfishing.  He is setting a precedent for a needed paradigm shift from seeking to kill the most tonnage of declining ocean resources to one that conserves and protects the resources with which tourists will interact for decades while spending money to do so.”  Sportfishing and diving have been proven to be compatible with conservation and sustaining marine resources. Protecting marine resources while growing Palau’s economy will help guarantee food security and economic stability for the nation.

In an effort to make Palau’s model a framework for other nations, President Remengesau, Jr. will host the Palau Oceans and Seas Summit in conjunction with Pacific Island Forum in late July. This instrumental summit will host heads of state and governments of Pacific island nations and demonstrate to other nations the significance of Palau’s actions to better sustain their economy by focusing on its marine eco-tourism trade. TBF’s Ellen Peel will sit on a panel during the summit as an expert voice for developing sportfishing as a sustainable form of tourism.

Get up to date information on events, news, and research on a constant basis. Submit your email now to join our exclusive newsletter.
BERMUDA’S PREMIER ORDERS EEZ NOT TO BE INCLUDED IN HAMILTON DECLARATION