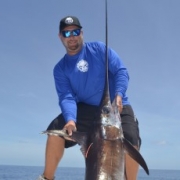 The final rule for Amendment 8 for swordfish management  is intended to more fully utilize the domestic swordfish allocation. Beginning in 2014, a new General Commercial Permit for Swordfish will be available that authorizes the use of hand gear, excluding buoys, to harvest swordfish and legally sell to authorized swordfish dealers.  The rule also allows charter/head boats to fish under the same restrictions as the general commercial permit.

An important note is that interested vessels would need to meet commercial vessel requirements and would forfeit their HMS Angling Category permits, making it illegal to target billfish outside of HMS registered tournaments.

The Draft Proposed Rule for Bluefin Tuna (Amendment 7) has several alternatives which include quota reallocation among categories and potential seasonal longline closures in the Gulf of Mexico. Of particular interest to The Billfish Foundation is NMFS is also considering opening the DeSoto Canyons and the Florida East Coast (FEC) longline closures to a limited number of longline vessels. Originally closed due to high interactions with juvenile swordfish and billfish, opening these areas to longlines could have a detrimental impact on the sportfishing industry.

NMFS is also considering TBF’s recommendation to allow the Gulf of Mexico a sub-quota of the total bluefin tuna Trophy Angling  for incidental catches. In recent years, landing an incidentally caught bluefin has not been possible because the fishery was closed in April and before the height of fishing season in the Gulf of Mexico. The proposed rule would separate the 4.2 mt of Trophy bluefin (greater than 73″) equally among the three regions – North, South, and The Gulf of Mexico. In recent years, the Southern Trophy bluefin tuna quota has been filled early in the year with subsequent closures of the fishery in April the previous two years.

To stay up to date on both of these important HMS Amendments, visit TBF’s Advocacy Center.

Get up to date information on events, news, and research on a constant basis. Submit your email now to join our exclusive newsletter.
COSTA GREEKFEST 2013