The International Commission for the Conservation of Atlantic Tunas (and other highly migratory species, HMS) convened mid-September in Madrid, Spain specifically to discuss management of tropical tunas followed by the topic of fish aggregation devices (FADs).

The first gathering regarding tropical tunas was largely made up of scientists, with heavy representation from Spain, France, and the U.S., as well as with individuals from Japan, Ivory Coast, the International Seafood Sustainability Foundation, and more. The purse seine fishery is of primary concern when it comes to tropical tunas, as most are caught in this type of gear. Further, purse seine vessels often set on tuna schools that have been aggregating thanks to a floating object, known as a FAD (fish aggregating device). ICCAT has recognized the significance of FADs in tuna fisheries, and began to work toward FAD management measures during this week in Madrid.

Definitions first had to be agreed upon:

Other action items specified in 2016 and now addressed:

Two more days were subsequently dedicated to FADs. A discussion began with a call for more data, as only a handful of contracting parties to the commission had submitted information in the first year (Spain, Curacao, and St. Lucia in 2012). The data request changed in 2015 to include more detailed information, and again in 2016. This proved to be a point of contention as scientists felt they do not have enough, or the right kind, of data, while the commercial tuna industry felt that the data requests were endless, complicated, and vastly time consuming. It was agreed that more information is needed but requests should be streamlined, a clarification that must be made by the Commission.

Presentations followed during which time studies from all parts of the world related to FADs were described. Topics included: 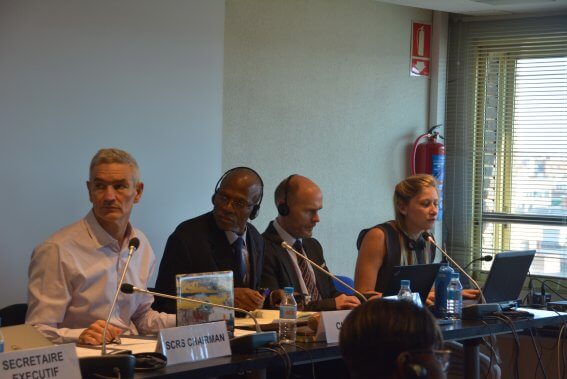 Following this session, Heather Sadusky, TBF staff member presented the topic of anchored FADs, which had previously received little to no attention at ICCAT meetings. These FADs are typically closer to shore and largely used by artisanal fishers with interest from recreational anglers as well. Tunas, billfish, mahi and wahoo are often caught around anchored FADs, and conflict between users is common, hence the need to develop management strategies. The presentation was met with comments of agreement from many West African nations, including Sao Tome and Principe, Ivory Coast, and Nigeria, where anchored FADs are used by artisanal fishers and zero management is employed. The group agreed that anchored FADs require management and will need to consider this sector in the future.

The FAD working group meeting wrapped up with finalizing recommendations to provide to the Commission, the body of politicians who make the decisions.

It is important to note the gathering of stakeholders at this fisheries conference: countries, scientists, non-governmental organizations, research institutes, and conservation groups all convened to bring topics to light and decide upon the best course of action for managing tuna as well as fish aggregation devices. While many have individual agendas, the group setting allows for an open discussion and concludes with agreed-upon recommendations for the decision-making arm of ICCAT. This can sometimes lead to vague or broad recommendations in order to satisfy all stakeholders, but these are often viewed as capable of being modified, and a step in the right direction for the long-term sustainability of fish stocks. TBF is pleased to be a part of the international fisheries community, to continue to have a voice at the table, and highlight the use of anchored FADs in the Atlantic.

Get up to date information on events, news, and research on a constant basis. Submit your email now to join our exclusive newsletter.
NOVA HALTS LONGLINE RESEARCH