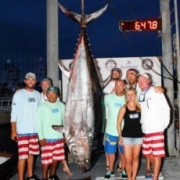 This summer’s Gulf of Mexico’s tournament season began “white hot” with good numbers of marlin, including large ones, and bluefin tuna, which presented unexpected excitement for anglers in the region.  Federal fishery regulations prohibit the targeting of bluefin tuna by both the commercial and recreational fisheries in the Gulf, but each category is allowed a limited “incidental” landing quota of the species.  An incidental catch occurs when anglers target another species, marlin or other tunas, and have a bluefin tuna take the bait.  Only recently, thanks to TBF, has the government allocated a quota for bluefin tuna caught by anglers in the Gulf. The quota is small, only 3,306.9 pounds, which can be filled quickly with a few large bluefin tuna.  The first bluefin weighed 647.80 pounds and was caught by Sydney Turner on board the boat You Never Know during the Mobile Big Game Fishing Club’s Memorial Day Tournament; that tuna won the Tuna Category in the tournament.  A second bluefin tuna was caught and weighed in the Gulf of Mexico during the Cajun Canyons Billfish Classic, an event that did not include bluefin as a qualifying fish in their tuna division.  The fish landed by Trey Thormahlen on board the boat the Bimini Babe weighed 541 pounds.   It will not take but a few more large bluefin to be weighed for the quota to be met and the season closed.  Boats can only keep one trophy size (73” + fork of tail to lower jaw) bluefin a year in the Gulf. 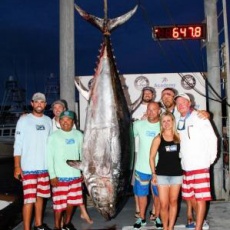 Get up to date information on events, news, and research on a constant basis. Submit your email now to join our exclusive newsletter.
GENERAL CATEGORY ATLANTIC BLUEFIN RETENTION LIMIT ADJUSTMENT