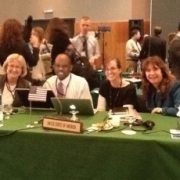 Over the past week, TBF’s President and the U.S. Recreational commissioner for the International Commission for the Conservation of Atlantic Tunas (ICCAT), Ellen Peel, attended and took part in vigorous negotiations during a ICCAT meeting in Morocco and reported the back on the following:

While last week ended with the possibility that all existing conservation measures for Atlantic blue and white marlin might expire, hard negotiations over the weekend resulted in the adoption of new strengthened measures.  The Commission adopted hard quotas consistent with the scientific advice for all nations landing marlin with reductions from recent average catches of 50% for blue marlin (to 2000 metric tons)  and 31% for whites (400 metric tons) – truly significant gains that should lead to further increases in stock sizes.  The U.S. annual angling quota of 250 marlin remains secure.  The new regulations will prohibit sale of recreationally caught marlin.

Get up to date information on events, news, and research on a constant basis. Submit your email now to join our exclusive newsletter.
Billfish Tagging 101