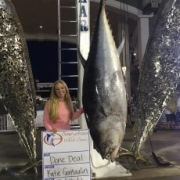 The quota for bluefin tuna in the Gulf of Mexico has been updated after a large individual was landed in a fishing tournament last week.

Katie Gonsoulin pulled in a 502.4-pound bluefin tuna while fishing on Done Deal at the Orange Beach Billfish Classic in Alabama. The remaining trophy fish quota for Gulf anglers is now approximately one metric ton, or about 1,150 pounds (whole weight). This subquota is part of the larger quota granted to the United States by the International Commission for the Conservation of Atlantic Tuna (ICCAT), a regional fisheries management body that conducts stock assessments and sets limits on catch of tuna and tuna-like species, including marlin and sailfish.

Gonsoulin’s fish won the tuna division, also earning her the Top Lady Angler award, and Done Deal became the first boat to ever weigh a bluefin tuna at the wharf in Orange Beach.

The Orange Beach Billfish Classic raises the most money in support of The Billfish Foundation’s mission for conservation than any other tournament.

More results from the 2017 OBBC tournament can be seen here.

Get up to date information on events, news, and research on a constant basis. Submit your email now to join our exclusive newsletter.
ADVANCEMENT OF BILLFISH CONSERVATION ACT – A PARTIAL STEP FORWARD