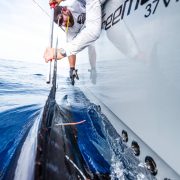 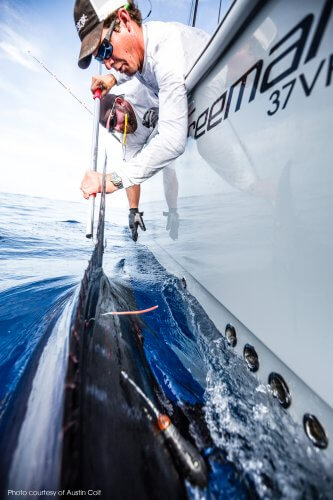 TBF’s Gulf of Mexico Blue Marlin Satellite Tagging Expedition, staged out of Port Eads, which is 84.5 miles south of New Orleans, 24 miles south of the southernmost road in the state and only 5 miles from the 100 fathom curve and deep water, was extremely exciting. Participants included TBF board members, scientists, members of the New Orleans Big Game Fishing Club and the Mobile Big Game Fishing Club, charter boats and an array of billfishing constituents with boats from Alabama, Louisiana and Mississippi.  TBF board chairman Scott Cooper, board member Johnny Dorland and president Ellen Peel, scientists Jim Franks from the Gulf Coast Research Lab of the University of Southern Mississippi, John Hoolihan from the University of Miami, a NOAA Associate and professional photographer, Austin Coit for Marlin Magazine met at the new Port Eads Marina and Lodges Complex. The complex is managed through a public-private partnership between the Port Eads Fishing Refuge, a 501 (c)(3) organization led by its president Jacque Kuchta, and John Burrell’s High Adventure Company, which has 30 years experience in managing first class hunting and fishing resorts around the world. The Port Eads facilities includes a 60 slip marina, two first class bunk houses, ice house, fuel dock and a restaurant.

The expedition’s first research goal was to deploy 15 satellite tags on blue marlin caught within a 4 day period; eleven tags were deployed and we plan to deploy the remaining four over the Labor Day Weekend.  Approximately 16 fish were caught, but some broke the line or threw the hook before being tagged. Each tag measures and records depth (pressure), ambient temperature and light levels used to estimate location. Other factors to be investigated include environmental clues that might influence individual fish movement.  Given the Gulf’s warm waters, prey diversity and fish aggregating characteristics of oil platforms, it is possible that some blue marlin remain inside the Gulf year round.  TBF’s traditional tagging and recapture data documents that some leave the Gulf.

Once the core group of participating boats started communicating by radio, interest in the Expedition quickly spread, resulting in many other boats agreeing to transfer caught blue marlin to one of two fast Freeman center console tagging vessels, Scott Cooper’s Triple C and Dr. Rollins Tindell‘s Kel Kat, on which scientists were stationed with tags. The transfers were accomplished by the tagging vessel crew attaching a tennis ball to a rod and reel and throwing it to the crew of the other vessel.  This was then attached to the line holding the marlin and the fish was reeled back to the tagging vessel.  Once leadered alongside, the marlin was tagged, resuscitated and released. Tags were programmed to record and archive data at pre-set intervals throughout their deployment and to pop-up at various intervals. After the scientists download and analyze the data, information will be shared.

Only with the generous financial support by donors, participation by an array of sportfishing vessels and lodging support was this research expedition made possible. Johnny Dorland of TBF’s board said, “It is a demonstration of the commitment by the Gulf of Mexico’s billfishing community to advancing billfish science for the future for billfish and billfishing.”

If you wish to support the next expedition in the Gulf of Mexico, please contact Ellen_Peel@billfish.org for more information.  Your contributions are tax deductible. 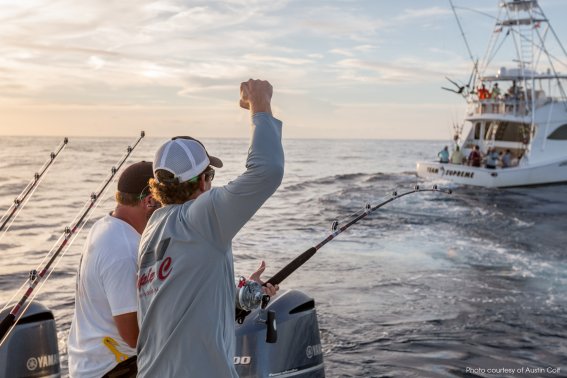 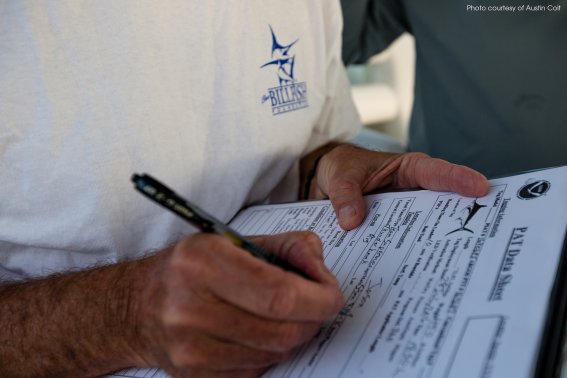 Get up to date information on events, news, and research on a constant basis. Submit your email now to join our exclusive newsletter.
TBF’S JUNIOR ANGLER PROGRAM

Spain Penalizes Its Anglers for Commercial Overfishing
Scroll to top