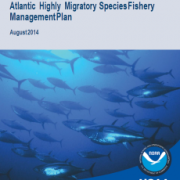 The National Marine Fisheries Service (NMFS) released the final regulations for the domestic management of western Atlantic bluefin tuna with Amendment 7 to the 2006 Consolidated HMS Fishery Management Plan.  Anglers in the Gulf of Mexico and Florida will applaud the decision to maintain closed zones and to allocate a portion of the trophy bluefin quota to Gulf anglers. These new regulations were developed to reduce the amount of dead discards, increase accountability and reporting requirements, and ensure regulations are consistent with international management goals. Maximizing fishing opportunity is also a major objective of the amendment to help the US maintain its quota of bluefin, which if not utilized, could be allocated to other countries with less stringent regulations or regards for conservation.

In January of 2014, TBF submitted comments opposing alternatives that would allow longlines access to closed zones and pushed for longer closure periods in both the Gulf of Mexico and the Mid-Atlantic. Not only would this achieve the goal of reducing bluefin dead discards, but it would also have a significant impact on reducing dead billfish discards. Since the establishment of these closed zones in 2000, billfish discards have been reduced by as much as 74%. Opening these areas back up for longlines would certainly be a step in the wrong direction for the conservation benefits gained would be lost. It could also spell the loss of the tremendous socioeconomic benefits generated by sportfishing in the region. 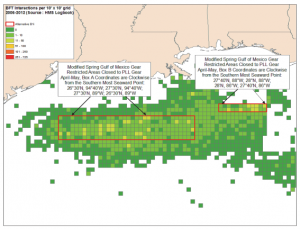 In its final decision, NMFS chose several alternatives that will have both good and bad outcomes for anglers. In the Gulf of Mexico Gear Restricted Areas (which encompasses the waters in and around the Desoto Canyon) closed zones were slightly altered from the original proposal and will prohibit pelagic longlines from making sets during the peak of the bluefin spawning season in April-May. Longlines will still be prohibited in the closed area off of Florida as well. However, in the Cape Hatteras Gear Restricted Area (which was also slightly modified after public comment) only longline vessels that meet certain criteria will be granted conditional access to fish the area from December to April, but the area will be closed to vessels that do not qualify.

All longline vessels are now required to retain all legal sized bluefin to increase accountability and provide incentive for reducing catches of bluefin. This will also be achieved through the establishment of individual bluefin quota (IBQ) program, that will limit the number of bluefin that can be retained (a ‘catch cap’) at the vessel and fleet level. Once the quota for a vessel or fleet is reached, the longline fishery is to be closed by NMFS, but permitted vessels will be allowed to switch to more selective fishing gear such as green stick. These accountability measures will also be complimented by the adoption of more rigorous requirements for reporting catches, landings, and the mandatory use of vessel monitoring systems.

The reallocation of bluefin quota amongst the various sectors was also a highly contested issue. Previously, the trophy subquota allocated 1.4 metric tons to the Northern category (waters north of Egg Harbor, NJ) and 2.8 metric tons to the Southern subquota (which includes the Gulf of Mexico). Many anglers in the South and Gulf of Mexico were frustrated with having little chance to retain bluefin given the short period of time they have before the Southern category closes in April. In its comments, TBF advocated for greater opportunity for anglers in the Gulf of Mexico to retain any bluefin that are incidentally caught by redistributing the recreational, trophy bluefin subquota. TBF comments suggested quotas of 50% for the South, 33% for the North, and 17% for the Gulf of Mexico. Ultimately, NMFS chose an alternative that will divide the trophy subquota evenly amongst each region, meaning roughly 8 trophy sized bluefin can be retained by recreational anglers annually in each sector.

Over the past decade, implementation of the rebuilding plan for bluefin at the international management level has allowed for Western Atlantic bluefin stocks to rebound from historically low levels to a healthier state. This year the International Commission for the Conservation of Atlantic Tunas (ICCAT) decided to increase the total allowable catch for western bluefin from 1,750 to 2,000 metric tons. Stock assessments estimate that the spawning stock biomass has increased by as much as 70% since 1998, which many scientists attribute to more stringent regulations, particularly measures taken by the US to reduce catches of juvenile tuna and more selective fishing practices. However, much debate and uncertainty still surrounds these assessments and the US is taking steps for the stock to continue to grow. The new regulations put forth by Amendment 7 will ensure that the US continues its best management practices while maintaining opportunities for anglers to pursue bluefin, one of the most iconic fish in the sea.

Get up to date information on events, news, and research on a constant basis. Submit your email now to join our exclusive newsletter.
Enchanted Forest Masquerade Ball – TBF’S 2014 Gala Fundraising Dinner