Team members from The Billfish Foundation joined in the Gulf & Caribbean Fisheries Institute conference held in Merida, Mexico last week. It was the 70th anniversary of the conference, where scientists, managers, and fishers all come together to share information, new technologies, and collaborate on solutions.

Both of TBF’s summer 2017 interns were accepted to present their projects at the conference: one a poster and the other an oral presentation. The poster’s topic was a study of consumer attitudes toward seafood and purchasing behavior. Do people really care where their fish comes from? The short answer is yes, the public cares about seafood sustainability, but their actions rarely reflect this attitude as most do not spend the money to purchase certified seafood, nor do many consider the fishing gears that cause the most damage.

TBF’s newest staff member and former intern, Heather Tomasetti, presented her research on fish aggregation device (FAD) management in the Caribbean. The product of this research is a guide to building a FAD management plan, which was well received by the audience. TBF was able to meet with several interested parties while at the weeklong conference and develop next steps for the research. 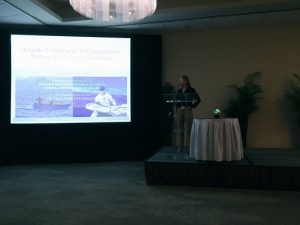 With a handful of groups who have expressed interest in utilizing the guide, TBF intends to determine the best locations for several pilot projects. There are groups that consist entirely of recreational anglers, communities that are made up of both recreational and artisanal fishers, and even one interested co-op of artisanal fishers. Over the next year, we will be working to identify which locations are most feasible and ready to use the guide and begin preparing for implementation.

In the Caribbean, there is very little management of FADs, which has led to explosive conflict between users on the water, in some instances the stealing of fish from recreational anglers by artisanal fishermen. TBF is hopeful that deployment, fishing effort, and catch can all be appropriately managed through community involvement. This guide is the first step in working towards that kind of sustainable solution.

Get up to date information on events, news, and research on a constant basis. Submit your email now to join our exclusive newsletter.
Results From ‘Grander’ Marlin Sample Available Years After Land...