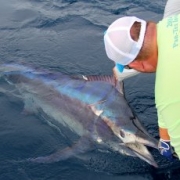 TBF’s socio-economic study in Panama documented that in 2011 (most recent data) that 86,250 visitors fished in Panama, who with the rest of their traveling companions spent $97 million on charter boats, fuel, food lodging and related expenses. The study also noted that the number of anglers visiting the nation had doubled since 2001 and so long as fishing remains great and anglers are informed the number should continue to increase.  The study also recorded that $170.4 million in total retail and business-to-business sales, 9,503 Panamanian jobs and increases in Gross Domestic Product of US $48.4 million were all related to sportfishing.

To learn more look at the links below or here.

Get up to date information on events, news, and research on a constant basis. Submit your email now to join our exclusive newsletter.
TBF ADDING TWO NEW LIFETIME ACHIEVEMENT AWARDS