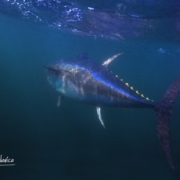 The National Marine Fisheries serviced announced that the recreational bluefin tuna harvest in the Gulf of Mexico has reached its quota and will close June 7, 2017 until the end of the year (December 31, 2017).

This sub-quota for the region is a recent development that TBF helped push for — prior to a division of the southern bluefin quota, the full allocation was landed before ever reaching the Gulf of Mexico. Ellen Peel, Director of The Billfish Foundation, said the excitement of several teams who brought in a trophy-sized bluefin this year in Alabama was unmistakable. Many praised NMFS and TBF for securing the distinct allocation.

Based on reported landings, NMFS determined that the angling category of bluefin tuna subquota has been reached for the year. In a newsletter they state, “Retaining, possessing, or landing large medium or giant BFT in the Gulf of Mexico by persons aboard vessels permitted in the HMS Angling category and the HMS Charter/Headboat category (when fishing recreationally) must cease at 11:30 p.m. local time on June 7, 2017.”

Only catch and release fishing for bluefin tuna is permissible in the Gulf of Mexico effective tomorrow. NMFS regulations require that all bluefin tuna should be handled in a manner that maximizes their survival, and without being taken out of the water.

Get up to date information on events, news, and research on a constant basis. Submit your email now to join our exclusive newsletter.
GULF OF MEXICO QUOTA ADJUSTED AFTER BLUEFIN TUNA LANDING

WHAT IS THE PORT STATE MEASURES AGREEMENT AND WHY DOES IT MATTER?
Scroll to top