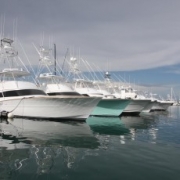 A recently formed group called the Bermuda Exclusive Economic Zone Stakeholders’ Caucus made up of conservationists, marine scientists, commercial fishermen, and recreational fishermen are playing an important in showing the importance of working with users groups to develop a plan for Bermuda’s EEZ. Following their meeting with the Premier and the Environmental Minister, the Caucus stated in a press release “The Premier made it very clear that the best interest of Bermuda and her people must be paramount at all times, and no risk of impediment complete control of our EEZ would be accepted.” The caucus believes “that decisions taken by the Bermuda Government that affect our EEZ must consider economic and social impacts as well as environmental and conservation issues.”

With an impending report on the future plans for Bermuda’s EEZ expected to come in the upcoming weeks, the decision of the Premier enables Bermuda to maintain flexible management of their EEZ that would not restrict recreational fishing or other potential economic activity in the waters around Bermuda. One SD department official states, “In the community, the polarizing groups have been coming together to discuss the topic. We are hearing more support for mixed use.” TBF applauds the work of the Stakeholders’ Caucus and the measures the government in Bermuda has listened to all of the user groups and members of the general public to try to find the best possible solution for increasing marine protection around Bermuda. TBF will continue to work with the Government of Bermuda and the members of the Stakeholders’ Caucus as Bermuda moves forward with how to manage their EEZ. To read TBF’s report on this important issue in Bermuda, click here.

Get up to date information on events, news, and research on a constant basis. Submit your email now to join our exclusive newsletter.
2014 TAG AND RELEASE CEREMONY RECAP

PALAU ANNOUNCES A BAN OF ALL COMMERCIAL FISHING
Scroll to top