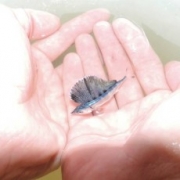 Encountering a blue marlin is quite a feat in itself, but seeing one this small is extremely rare. Richard Brackett from Charleston, South Carolina contacted us about catching a small billfish. He sent us the picture above and after looking at it, it was confirmed that he caught a baby blue marlin!

Many thought the picture he submitted shows a sailfish due to the “sailfish-like” dorsal fin but blue marlin also have a “sail” early in life. Eventually it recedes and their bill grows out. Sailfish can be easily distinguished due to their dorsal AND bill. Luckily, anglers have also encountered “baby” sailfish in the Gulf of Mexico and sent pictures in for confirmation. For clarification on what is a blue marlin and what is a sailfish, please refer to the pictures and illustrations in the gallery.

My boss, Joey Cagle and I decided to run out to swordfish for a couple hours (off of Charleston, SC), so we left about noon and trolled from 200’ straight out to the deep just to see what we came across on the way. We had a pretty good day and ended going 1-2 pm sails and had a couple other bites. Once the sun started to set we set up for a drift. After an hour or so, I saw what we thought to be a juvenile sailfish in the transom lights. Being such a last minute trip, I forgot the dip net so I had to resort to option two. I filled the bucket with water, opened the transom door and scooped him up with my hands and set him in the bucket. I have to say even at this small size they are crazy aggressive. I got him in my hands in the bucket to snap a quick picture so we could release it as quickly as possible.

Great story and thank you for sharing it guys. This could possibly be one of the easiest blue marlin releases ever! This is the smallest blue marlin we have heard of recently but other “baby” blue marlin were spotted from South Carolina down to South Florida.  It is amazing to think that these little guys can get to be over 1500+lbs when fully grown!  If you encounter any of these guys please let us know and email us!

Get up to date information on events, news, and research on a constant basis. Submit your email now to join our exclusive newsletter.
NMFS RELEASES UPDATES FOR BLUEFIN TUNA AND SWORDFISH MANAGEMENT