On January 1, 2018 Captain Eddy Lawler and crew of Black Marlin caught a 1,089-pound blue marlin off Exmouth, Western Australia. It was the first grander blue marlin (those 1,000 lbs or greater) caught in Australia, and the first anywhere in the world for 2018. Anglers Hayley Dellar, Leigh Freestone, and Clay Hilbert were on board that day, all of whom are part of The Billfish Foundation’s Tag & Release database. Hilbert is credited with fighting and bringing in the fish.

Australia is a world-class destination for sportfishing, including billfish and swordfish, but the monsters are usually black marlin. A 1046-pound black marlin was caught in 1966, Australia’s first grander of any kind. Exmouth is now on the map as a location for grander marlin.

Peak Sportfishing shared the news of their catch January 2 on Facebook, detailing the story and thanking all partners who helped verify the fish. Most billfish fishing is catch-[or tag]-and-release, and Peak Sportfishing contributes hundreds of records of tagged billfish each year to TBF’s database. Capt. Lawler has reported over 1200 fish, with some tagged fish weighing over 750 lbs. TBF is awaiting further details from the captain and crew. 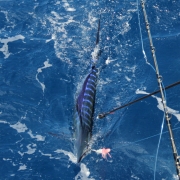 Counting Blue Marlin in the Ocean 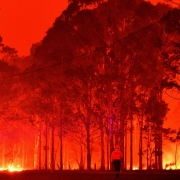 How to help those in Australia

Get up to date information on events, news, and research on a constant basis. Submit your email now to join our exclusive newsletter.
Announcing TBF’s 2017 Tag & Release Competition Winners