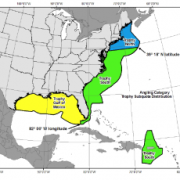 The National Marine Fisheries Service (NMFS) has announced the closure of the Atlantic bluefin tuna (BFT) Angling category for giant “trophy” bluefin tuna (measuring 73″ or greater) in the southern area. The closure will begin at 11:30 p.m. local time, this Sunday, June 7, 2015 through the remainder of 2015. Until this time, anglers are still allowed to land a trophy bluefin tuna and are required to report their landings of any trophy bluefin tuna to NMFS with 24 hrs. HMS Angling permit holders within the southern area are still permited to land BFT measuring from 27″ to less than 73″. The Gulf Of Mexico and Northern trophy category will still be open until the limit of 8-9 trophy sized BFT is reached. The southern area is denoted as the Atlantic waters south of Great Egg Inlet, NJ, exluding the Gulf. Please see below for full details from NMFS and keep up to date on any new announcments on the TBF website. 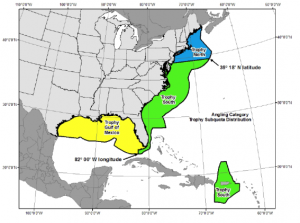 NMFS has considered the fact that it is in the process of proposing a rule that would implement and give domestic effect to the 2014 ICCAT recommendation on western Atlantic BFT management, which increased the U.S. BFT quota for 2015 and 2016 by 14 percent from the 2014 level. The domestic subquotas to be proposed in that action would result from application of the allocation process established in Amendment 7 to the 2006 Consolidated Atlantic Highly Migratory Species Fishery Management Plan to the increased U.S. quota, and would include an increase in the southern trophy BFT quota from the currently codified 1.3 mt to a total of 1.5 mt. However, because current landings exceed both the currently codified and the anticipated proposed quota for the Angling category southern area, closure of the southern area trophy BFT fishery needs to occur regardless of the proposed quota increase.

This closure applies to vessels permitted in the HMS Angling category and the HMS Charter/Headboat category fishing in the southern area (defined in bold above).

Fishermen may catch and release or tag and release BFT of all sizes, subject to the requirements of HMS catch-and-release and tag-and-release programs. NMFS regulations require that all BFT that are released be handled in a manner that will maximize their survival, and without removing the fish from the water. For additional information on safe handling, see the “Careful Catch and Release” brochure available at www.nmfs.noaa.gov/sfa/hms/.

This notice is a courtesy to BFT fishery permit holders to help keep you informed about the fishery.  For more information on BFT fishing regulations, including recreational size and retention limits, please go to hmspermits.noaa.gov  or call (978) 281-9260.  Official notice of Federal fishery actions is made through filing such notice with the Office of the Federal Register.

Get up to date information on events, news, and research on a constant basis. Submit your email now to join our exclusive newsletter.
PUBLIC LOCKED OUT OF BISCAYNE NATIONAL PARK