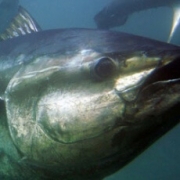 The National Marine Fisheries Service made the decision to close the fishery based on the best available landings information in addition to current catch rates and fishing conditions. NMFS determined that the September subquota for the General category will be reached by October 5, warranting a closure.

This closure applies to vessels permitted in the commercial Atlantic tunas General category as well as the HMS Charter/Headboat category. It goes into effect at 11:30 p.m. local time and lasts through November 30, 2017. Retaining, possessing, or landing large-medium or giant (measuring 73 inches curved fork length or greater) by persons aboard such permitted vessels must cease at this time.

During the closure fishermen may catch and release or tag and release bluefin tuna of all sizes, in correspondence with best handling practices to maximize survival.

When the fishery does reopen on December 1, 2017, the daily retention limit for the category will be one large-medium or giant bluefin tuna per vessel per day/trip.

Get up to date information on events, news, and research on a constant basis. Submit your email now to join our exclusive newsletter.
TUNAS & FLOATING OBJECTS DOMINATE CONVERSATION AT ICCAT