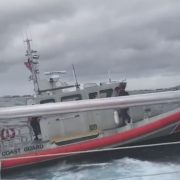 A group of anglers were rescued off the Boynton Beach Inlet Saturday morning after their boat was allegedly sunk by a massive marlin. However, their story has since been called into question.

The Sun Sentinel reports that a passing catamaran pulled the five men from the ocean as their boat sank within view of the shore. One of the men told the crew of the catamaran that a large marlin was responsible for sinking their 31-foot vessel, causing the boat to take on too much water before going under.

Local, seasoned fishermen, however, say the cause was likely user error, not a big fish. Fly Navarro, a friend of TBF, told the Sun Sentinel, “The fish itself is attached to a fishing rod. It’s not going to pull a boat under.” He provided another possible scenario: If the fish was already dead and being dragged onboard, the fishermen could have miscalculated the weight of the marlin and the crew, causing the small vessel to flip.

Bouncer Smith, award-winning captain and friend of TBF, told the paper that the fishermen could have been trying to drive the boat in reverse in order to keep the line from breaking, and perhaps submerged the boat that way. “It would more than likely be caused because the marlin distracted the fishermen and they were paying more attention to the marlin than the waves. It could happen in the blink of an eye.”

The seas were rough on Saturday and the National Weather Service had issued a small craft advisory at the time this vessel was out. Winds were forecast at 20 to 33 knots with seven-foot waves or larger. Such conditions are great for sailfish fishing, and south Florida is currently in the height of the season. It’s likely that the fishermen hooked up a sailfish, though it’s possible a marlin could have been hooked and the anglers may not have been prepared for such a catch if they were targeting sailfish.

No one was injured in the incident. The Coast Guard retrieved the rescued men from the catamaran, and none could be reached for comment on the story.

Get up to date information on events, news, and research on a constant basis. Submit your email now to join our exclusive newsletter.
Successful Buccaneer Cup Despite Wild Weather