A STEP IN THE RIGHT DIRECTION FOR AUSTRALIA 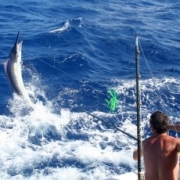 Recreational fishing organizations in Australia are applauding the newly elected Liberal Party’s plans to suspend and reform the management plans for the nation’s network of marine reserves. The newly appointed Minister for the Environment, Greg Hunt, is also a welcomed change for the nearly five million anglers across the country. The party has vowed to take significant measures to not only restructure the management plans, but also ensure that there is adequate consultation with stakeholders and better representation for anglers.

Earlier this year, the controversial management plans for commonwealth marine reserves were passed which would have locked out anglers from over half a million square miles of ocean (see “The Future of Australia’s Marine Reserves”). Some of these reserves included no-take zones within the Coral Sea that would prohibit anglers from fishing in some of the best marlin grounds in the world. This would result in huge losses for the recreational fishing industry in Australia, which generates an estimated AUD $10 billion annually. For the Cairns region alone, independent economic assessments have estimated that if the original management plans were implemented the reserves could lead to a loss of $15 million annually for the charter sector alone and a significant risk of losing half of the fleet. These plans were approved all despite there not being sufficient consultation with stakeholders and the lack of a sound scientific basis for the design of these reserves. Anglers and numerous other user groups alike felt that their voices were not heard over the powerful, foreign based environmental groups which exerted a strong influence in the creation of these reserves. These groups took an uncompromising approach to the issue which advocated for the entire Coral Sea to be managed as a no-take zone, closing off the Coral Sea to all fishing.

Fortunately, the Liberal party led by Prime Minister Tony Abbott is taking steps in the right direction. Abbott has pledged to establish a scientific panel to conduct a thorough review of the science behind the design of the reserves as well as regional advisory panels. These panels are intended to ensure that adequate consultation occurs with all stakeholders to fully understand the potential impacts of the reserves and ensure that a balanced approach is taken between conservation and the needs of users. Additionally, the Liberal party has vowed to establish a Recreational Fishing Council as well as allocate $1 million to support the Australian Recreational Fishing Foundation (ARFF). The council will be responsible for improving communications with anglers by collecting catch data as well as data on the socioeconomic impacts of anglers to better manage fisheries and represent anglers.

Anglers around the world should also be pleased to know that the actions being taken in Australia represent a growing trend of recognizing the importance of incorporating into the management of marine environments, something that environmental groups failed to do here. In the end, the extreme, unwavering position taken by some environmental groups proved to be their downfall as indicated by one group who even admitted to making “errors in judgement” when dealing with the recreational sector. Their actions may ultimately prove to a detriment to any legitimate conservation efforts as now the entire drafting process will have to begin anew taking resources and efforts away from utilizing existing, proven management practices such as size limits and enforcement. However, this is not just a win for anglers, but for everyone who has a stake in the marine environment and the local economies that are driven by a vibrant sportfishing industry. Hopefully, political leaders in Australia will make good on their promises to help restore the confidence of anglers and give the recreational sector the “respect and recognition it deserve as contributors to the environment, healthy lifestyles and to the nation’s economy.”

Get up to date information on events, news, and research on a constant basis. Submit your email now to join our exclusive newsletter.
Photo Contest Winners