A RECAPTURE TO REMEMBER 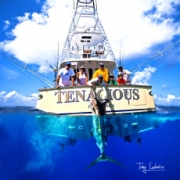 Whether a novice or tournament pro, every angler out there should consider themselves very fortunate to have the opportunity to tag and release a billfish. Just seeing a marlin or sailfish is an amazing experience, but perhaps even more spectacular than seeing one from the topside of a boat is jumping in the water and witnessing the grace and beauty of a billfish close up. In June of 2013, Kasey Swan was lucky enough to not only tag and release a white marlin, but for this fish to later be recaptured. What made this recapture even more extraordinary is that the experience was photographed by TBF’s artist of the year and longtime conservation partner, Tony Ludovico.

Photo of the tagged white marlin taken by Ludovico released by Swan and crew of the “Tenacious” off Cap Cana recaptured by the “J Hook” eleven months later.

Kasey Swan is the owner of the 56’ Feedom, “Tenacious” captained by Danny Ford and spent much of last summer fishing out of Cap Cana, Dominican Republic. Swan commissioned Ludovico to photograph “Tenacious” and any billfish releases for a few days in June, the peak of white marlin season. For one of the whites that was reeled in, Ludovico jumped in and captured some beautiful shots of the marlin swimming away with a tag in it.

In May of 2014, almost exactly eleven months after it was tagged, this white was recaptured only a short distance from where it was released off of Cap Cana. When it was released by Josh Turner and Capt. Michael Price on the “J-Hook” they estimated the fish weighed roughly 60 lbs., the same weight as when it was released by the crew of “Tenacious.” Not only was Swan lucky enough to have his fish recaptured, but also has the stunning pictures from Ludovico to remember this incredible story.

Congratulations to Kasey, Capt. Ford, first mate Jarad Beshammer and the crew of the “J-Hook.” Special thanks to Josh Turner for reporting the recapture as well as Kasey Swan and Tony Ludovico for their strong support and sharing this amazing story with us. For more information on getting involved in TBF’s Tag & Release program please click here. To see more great release shots or have interest in commissioning Tony Ludovico please see his website.

Get up to date information on events, news, and research on a constant basis. Submit your email now to join our exclusive newsletter.
TBF AT CASA VIEJA LODGE