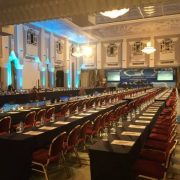 More than 700 delegates from 47 member nations met in Marrakesh last week for the International Commission for the Conservation of Atlantic Tunas (ICCAT) to discuss management strategies for several valuable species. The United States is one of many countries party to the commission, an inter-governmental organization responsible for the conservation of tunas and other migratory fish in the Atlantic Ocean. 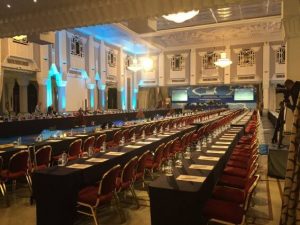 A look at the Nov. 2017 ICCAT meeting in Marrakech (credit: Julia Snouck-Hurgronje)

This year, tunas, swordfish, and sharks were on the agenda as scientists brought recommendations based on research findings. The catch limit for western Atlantic bluefin tuna was increased to 2,350 metric tons (mt), resulting in a 17% quota increase for U.S. fishermen. NOAA Fisheries reports that this level of catch will avoid overfishing while providing for the stability of the fishery over the next three years. The catch limit for the eastern Atlantic/Mediterranean stock was also increased for the 2018-2020 period, alongside fishery monitoring and control measures.

Bluefin tuna are arguably the most valued fish in the sea, and a higher quota means higher profit for many in the industry. Quota decisions have become highly politicized, and continue to increase despite attempts by environmental group to list the Pacific bluefin tuna as an endangered species considering its drastically reduced numbers. In commercial tuna fishing, many non-target species are also threatened, including sea turtles, sharks, and billfish.

The North Atlantic shortfin mako is one such species, and after conducting a new stock assessment, ICCAT’s scientific committee advised in October that the stock is overfished and overfishing is occurring. It was decided last week to focus on measures that will reduce fishing mortality as well as efforts to improve data collection. Additional scientific advice was called for on biologically important areas for this species, and the effectiveness of mitigation measures such as circle hooks, which have significantly improved billfish survival rates. When the Commission convenes in 2019 it must establish a shortfin mako rebuilding plan.

ICCAT members reached an agreement at this meeting that lowers the total allowable catch for the North Atlantic swordfish stock in order to ensure it remains healthy. A recent assessment shows that the stock is not overfished nor is overfishing occurring, although the rate of recovery has been slower than expected.

And after seven years of negotiations and amendments to the original 1969 ICCAT Convention, the Commission is nearing the final stage of reshaping their mission to reflect more modern principles, such as the precautionary approach and ecosystem-based approach to fisheries management. The amendments will also clarify the scope of the Commission, particularly when it comes to sharks, which are currently not explicitly considered.

The Billfish Foundation participates in as many ICCAT meetings as possible, providing a voice not only for billfish but also for recreational anglers. TBF President Ellen Peel has served as the Recreational Chair to ICCAT, Peter Chaibongsai is currently an advisor on the U.S. Advisory Committee to ICCAT, and Heather Tomasetti presented research regarding fish aggregation devices to the scientific committee in September.

Get up to date information on events, news, and research on a constant basis. Submit your email now to join our exclusive newsletter.
Spearfish Magazine – Issue 16