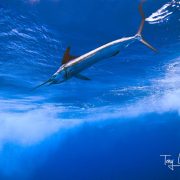 As can be seen in the table below, much of the year’s allocated landings remain available. The Billfish Foundation applauds anglers for supporting the philosophy of catch and release fishing.

The landings are compiled from self-reporting from anglers, tournament landings from the Recreational Billfish Survey (RBS), catch card reports from North Carolina and Maryland, and individual billfish intercepted by the Large Pelagic Survey (LPS) and Marine Recreational Information Program (MRIP). These estimates are subject to change due to late reporting and depend on the accuracy of the reporting entities.

The recreational billfish fishery is limited to 250 landings of Atlantic blue and white marlin and roundscale spearfish combined per year. Western Atlantic sailfish are not included in this limit.

Get up to date information on events, news, and research on a constant basis. Submit your email now to join our exclusive newsletter.
Pacific Bluefin Tuna Will Not Be Listed As Endangered