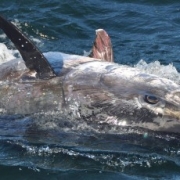 The annual negotiations by member nations of the International Commission for the Conservation of Atlantic Tunas (ICCAT) concluded in late November following intense negotiations over western and eastern Atlantic bluefin tuna; North and South Atlantic swordfish; and North and South Atlantic albacore.  The current landing levels for both western and eastern Atlantic bluefin tuna were not increased, but rather extended for another year pending the outcome of 2014 stock assessments.  The swordfish management measures were extended for another three years, which protects the U.S. quota share for that time.  TBF President Ellen Peel, U.S. Recreational Fisheries Commissioner, said “fortunately the U.S. did not lose any swordfish quota, she encourages all anglers to report every swordfish they land to protect the U.S. interest.”  The landings limit for North and South Atlantic albacore will remain at the current levels.

The big disappointment was failure to reach agreement on a number of shark measures, especially requiring that all sharks be landed with fins naturally attached, which the U.S. proposed.

Compliance with ICCAT measures again received a lot of attention with nations agreeing that the records of the 47 member and 5 non-member nations be reviewed and action taken if found out of compliance.  The U.S. remains the leader in keeping compliance an important issue that receives a significant amount of attention during the negotiations each year.

Get up to date information on events, news, and research on a constant basis. Submit your email now to join our exclusive newsletter.
HMS Amendment 7 – Bluefin Tuna