RESULTS OF PUBLIC CONSULTATION ON THE FUTURE OF BERMUDA’S EEZ 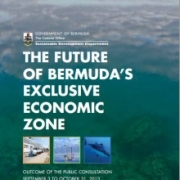 Public Input on the Future of Bermuda’s EEZ

In 2013, the Bermudian government began the ongoing process of evaluating options for the future management of its exclusive economic zone (EEZ). From September 3rd to October 31st of 2013 public consultation was conducted and the results of this consultation have recently been released by the Sustainable Development Department. The report, The Future of Bermuda’s Exclusive Economic Zone: Outcome of the Public Consultation reflects the diversity of opinions held by stakeholders. Most of all, the report emphasizes the need for the government of Bermuda to identify and evaluate the many important ecological, social, cultural and economic issues to be further addressed before any decisions about the future of its EEZ can be made.

In surveys distributed by the Sustainable Development Department, the public was asked to weigh in on options including the establishment of no-take marine reserve (MR) covering roughly 80% of its EEZ, developing an offshore commercial fishery, seabed exploration, and mineral extraction from the seabed. Survey responses and comments submitted ranged from advocating for strict protection of Bermuda’s EEZ to activities that “fully explore” the natural resources within Bermuda’s EEZ. The government has stated it wishes to show its commitment to the international community while fully considering the socioeconomic impacts that may arise including foreign investment and the creation of new jobs and industries. Unfortunately, the Bermudian government is lacking any “sound economic profiles” for the potential options they are considering.

Fortunately, TBF has been involved with this process since news of a possible MR was announced. By participating in public meetings, distributing TBF reports to the public and meeting with government officials, TBF stressed the importance of sportfishing and that the many benefits it generates to Bermuda are not overlooked. Government administrators obviously understood input from TBF about the significant deterrent that a marine reserve would have for anglers wanting to fish for fishing would be prohibited. Not being able to fish during the long trip to Bermuda or explore new fishing grounds could result in fewer visiting anglers. Current statistics that visiting boat owners and guests spend on average $150,00 and $4,000 respectively compared to the average visitor coming by air or cruise ship that spend on average $1,100 and under $200 respectively. Previous socioeconomic studies conducted by TBF in other fishing destinations also indicate that visiting anglers participating in billfish tournaments generate $40 million USD annually in Bermuda alone. For Bermuda to retain its self-proclaimed title as the “blue marlin capital of the Atlantic” and the millions of dollars its economy currently receives from sportfishing tourism, shutting out the economic benefits generated by anglers would not be a wise decision. In Bermuda, billfishing is almost an entirely non-extractive activity and 98% of all billfish caught in tournaments from 2010-2013 were released. Establish a MR and prohibiting sportfishing from up to 70% of Bermuda’s water would do little to protect highly migratory species that face intensive commercial fishing pressure. Officials from Bermuda have also stated that the high costs of enforcement for such a large, offshore area is another significant challenge in maintaining an effective MR and quite often anglers are responsible for reporting illegal activities. Prohibiting anglers from these areas would mean the loss of an invaluable aid to enforcement efforts while providing virtually no benefit to Bermuda’s marine resources.

Though planning and managing a MR, like managing all marine resources, benefits from public input, sound decision making requires detailed, substantiated facts and statistics. Assessing the economic impacts of establishing a MR necessitates socio-economic studies. In an address to the Bermuda House of Assembly, the Premier, Michael Dunkley, acknowledged that “perceptions of biased and unreliable information, shallow due diligence and subjective assertions out not to be relied upon to make such an important decision.” Like Bermuda, the initial design and public consultation for Australia’s national system of marine reserves was also heavily influenced by powerful environmental organizations. For Australia, the failure to fully account for all of the potential impacts and not working with important stakeholders like anglers throughout the creation of its marine reserves resulted in tremendous controversy and the government having to repeat the entire process of consultation and creation of these reserves. These are all efforts and resources that take could be put toward better utilizing the strong, proven management practices that Bermuda already has in place.

“Planning for the future of our EEZ is probably one of the most complex and capacious opportunities that the Government and people of Bermuda have ever been presented with.” This statement made by the government of Bermuda in its consultation report shows that Bermuda has a lot of work in front of them to establish effective management of its marine environment that does not erode the current economic benefits from sportfishing. Going forward, Bermuda plans to investigate options for conducting independent socioeconomic assessments and TBF posts will follow.

To learn more about the issues in Bermuda, see TBF’s News Section for previous articles.

Get up to date information on events, news, and research on a constant basis. Submit your email now to join our exclusive newsletter.
TAG & RELEASE STANDINGS – 11/1/14