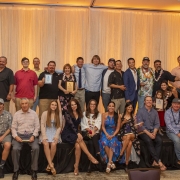 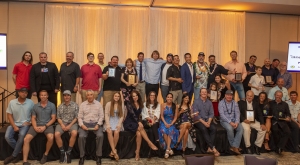 Love was in the air during The Billfish Foundation’s 2019 Tag & Release Awards Ceremony on February 14th, 2020 at Jungle Island’s Bloom Ballroom. The night was made possible through the generosity of Luis Bacardi and the Rum Bum Fishing Team, as well as other industry sponsors, including King Sailfish Mounts, Costa Sunglasses, Triad Foundation, Marina Casa de Campo, Floy Tag, and Viking Service Center. Viking Service Center also generously provided roses for the ladies in attendance. Of course, the unsung heroes of the night were our wonderful volunteers, who aided us in so many ways. The 2020 Awards Ceremony was truly a group effort!

Friends came from all over the world to meet and mingle over libations, including longtime TBF members Chris and Elisa Sheeder from Costa Rica and his family from Hawaii, Laura Jessen and her crew from Costa Rica, Samuel Urbain and family from France, and past winner Kumie Saegusa and her husband from Japan. Guests were enthralled with the Jungle Island animals and enjoyed testing their luck to win raffles, which included prizes from Yeti, Costa Sunglasses, ROFF’S, Hook & Tackle, Pelagic, Sportfish Outfitters, Fathom Offshore, Fish Monkey Gloves and Marina Cap Cana!

When the Awards Ceremony began, the first recognized were the Tag & Release Program sponsors, whose representatives from Garmin, Yeti, Costa, King Sailfish Mounts, Casa Vieja Lodge, and the International Game Fish Tournament Observers accepted plaques highlighting their dedication to conserving billfish and promoting the sportfishing community. Then, award winners were presented their most beautiful awards, made by King Sailfish Mounts, among a chorus of cheers from friends and family. Some well-known fishing titans were recognized, including Gray Ingram and Chris Sheeder. Others were fairly new faces, up and comers including Jill Yates, who won five awards that night, and Luke Lulfs, who won eight!

Like in year’s past, all overall winners were gifted with beautiful Fathom Offshore lures. The top overall crews also received Fish Monkey Gloves and Waterlust apparel. As if that were not enough, the Top Overall Tagging Angler and Top Overall Release Angler received a spectacular package from Marina Cap Cana, which included lodging and slip space.

The Billfish Foundation’s Tag & Release Program is the largest private one in the world, boasting over 260,000 records since 1990. Anglers, captains and mates worldwide are vital assets in gathering the valuable data required to further billfish science and ensure that fishing opportunities are available for future generations. Without the dedication of these individuals, TBF’s billfish and sportfishing conservation would not be possible. To learn more about becoming a part of the important work done with TBF’s Tag & Release Program, check out our website. To stay up to date with all things billfish, become a member, subscribe to our newsletter, and follow us on social media, @TheBillfishFoundation.

Get up to date information on events, news, and research on a constant basis. Submit your email now to join our exclusive newsletter.
General Category Bluefin Fishery Temporary Closure