Recreational fishing in Panama and throughout Central America is likely to feel negative impacts from a fishery partnership between Panama and China established through recent trade agreements on December 3, 2018. The agreement will allow tons of skipjack tuna to be caught by purse seine vessels and transshipped to Chinese commercial factory trawlers in international waters.

TBF has learned that 13 purse seine vessels in Peru are being brought to Panama to fish in Panama’s waters. Debate on whether purse seine vessels can fish in Panama’s waters has been on-going since March 2, 2011, when Panama’s former Director of ARAP, Research and Development (Aquatic Resources Authority of Panama) Kwai Ben Franklin, argued that under an earlier decree purse seining was not prohibited. Others maintain that Panama banned the use of the gear in its waters in 2004 with additional prohibitions added in 2010. The debate will continue, unfortunately, excessive extraction of skipjack and other tunas may take place at the same time negatively impacting Panama’s world-famous sportfishing eco-tourism.

See our past post on Panama as well as the socio-economic importance of recreational fishing was back in 2013 which will no doubt be negatively impacted if these vessels come into Panamanian waters to fish. 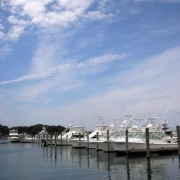 Get up to date information on events, news, and research on a constant basis. Submit your email now to join our exclusive newsletter.
Changes in Mahi-Mahi allocation coming up in the Atlantic?

Counting Blue Marlin in the Ocean
Scroll to top