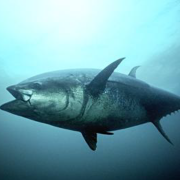 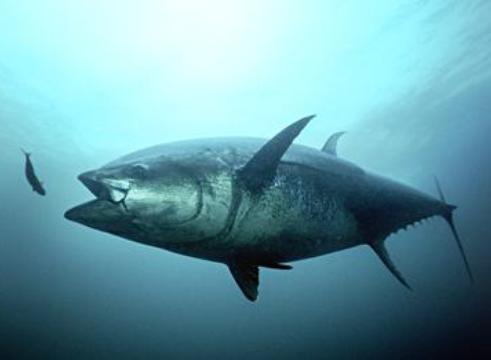 Draft Amendment 7 to the 2006 Consolidated HMS Fishery Management Plan (FMP) for bluefin tuna was released in August of 2013 with possible alternatives for managing domestic bluefin tuna. The National Marine Fisheries Service (NMFS) must find a balance between management decisions that will prevent overfishing and minimize bluefin bycatch while also providing opportunities for U.S. fishermen to harvest the full allocation of bluefin tuna. Landing and retaining the entire U.S. quota is a major concern; a failure to land and retain the quota could result in a loss of tonnage to other nations and a diminishment of U.S. negotiating strength at international negotiations. If the U.S. loses part of its quota, it may no longer be viewed or treated as a major fishing nation with less deference and respect given to its conservation and management preferences at international negotiations.

The objectives of Amendment 7 are to take actions that will rebuild the stock, end overfishing, and meet conservation and management objectives set forth in the 2006 HMS Fishery Management Plan as well as international recommendations established by ICCAT. In doing so, the new fishery management plan will optimize fishing opportunity, enhance reporting and account for and reduce bluefin tuna dead discards. Dead discards are an important aspect because they are now accounted for as part of the allocated quota and a reduction in dead discards is beneficial for the fishery.

The Draft Amendment 7 focuses primarily on quota re-allocation of bluefin tuna amongst categories, but also proposes alternatives to open current pelagic longline closed areas to longline fishing again as well as establishing new longline closures to minimize bluefin tuna interaction and discards. TBF has broken down the main proposed alternatives in Amendment 7 and provided initial comments for each below.

[expand title=”Limited and Conditional Access to Longlines in Closed Areas”] 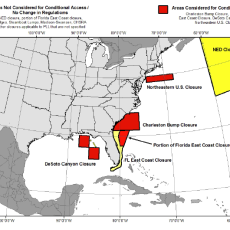 Under Alternative B 3, NMFS is considering alternatives that would allow a small number of vessels to fish in the pelagic longline closed zones that were established in 2000 to reduce the bycatch and discards of juvenile swordfish, billfish, and other marine life. These areas include the Florida East Coast, the Desoto Canyons, the Charleston Bump, and the North East Closures. Currently, a small number of vessels are provided Exempted Fishing Permits (EFPs) to fish in these areas for research purposes, but NMFS states that the non-research commercial data from inside these areas will “be used to evaluate the effectiveness and/or impacts of closed areas as well as stock assessments or other management measures.” Additionally, NMFS believes that allowing commercial longline vessels to fish in these areas will “provide additional fishing opportunities…and mitigate the potential negative impacts of other draft Amendment 7 alternatives that may be implemented.”

NMFS estimates that 80 trips will be taken annually into the DeSoto Canyons closed areas by longline boats in the Gulf of Mexico. Similarly, it estimates that 20 trips annually will be taken into the Florida East Coast (FEC). Vessels fishing in these areas would be required to have an observer on board and report their catches daily. Despite NMFS having the ability to close these areas based on bycatch and discard numbers, the potential negative impacts simply do not outweigh the conservation benefits seen by the establishment of these closed zones.

TBF Recommendation: Keep the longlines out of the current longline closed zones. These areas were established to reduce the bycatch and discards of juvenile swordfish, billfish and other marine life. The benefits have been seen in both the rebuilding of the North Atlantic swordfish stock and in the stabilized blue and white marlin stocks. The benefits of these longline closed zones have been instrumental for the recreational fishing community with great numbers of billfish and swordfish caught in recent years. If NMFS allows fishing in these areas, it could not only have large ecological impacts but tremendous socio-economic impacts on the sportfishing community.  [/expand]

In Alternative E 3, NMFS is considering allocating a portion of the Trophy South Sub-Quota to the Gulf of Mexico. Currently the sub-quota for trophy-sized bluefin tuna (greater than 73″ curved fork length) is split between the north and the south, each receiving 1.4 metric tons (mt) and 2.8 mt, respectively. The North/South dividing line for the Trophy Sub-Quota is Great Egg Inlet, NJ and does not currently provide equal opportunity to all anglers along the South Atlantic and in the Gulf of Mexico. In both 2011 and 2012, the trophy Southern allocation for Trophy bluefin tuna was closed the first week of April, limiting the opportunity for many anglers. While it is illegal for anglers to target bluefin tuna in the Gulf of Mexico, providing them with quota will reduce dead discards of bluefin tuna caught unintentionally while fishing for other target species. 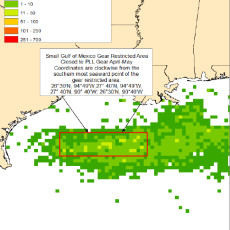 Within Alternative B 1 for Area Based Alternatives, NMFS is considering several possibilities for additional restricted areas for longlines with the goal of reducing interactions and discards of bluefin tuna. One of the two preferred alternatives is the establishment of a ‘Small Gulf of Mexico Restricted Area’ that would restrict the use of pelagic longlines for the months of April and May (Alternative B 1f). The identified area encompasses the areas of historically high bluefin tuna interactions and would still permit the use of alternative gears (green stick and buoy gear) within the closed zone to fish for yellowfin tuna and swordfish. The proposed “Access Based on Performance” for a new Cape Hatteras Pelagic Longline Restricted Area is also a preferred alternative that would reduce the interactions with and discards of bluefin tuna. Vessels determined to have a demonstrated low rates of  interactions with bluefin tuna and compliance with vessel reporting and monitoring requirements would be permitted to fish the months of December through April in the gear restricted area. 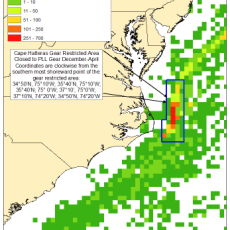 Alternative B 1e is more restrictive and would prohibit longline fishing in the Gulf of Mexico within the U.S. Exclusive Economic Zone (EEZ) for three months (March through May) west of 82°W. Longline vessels would be authorized to still fish, but required to use buoy gear, greenstick gear, or rod and reel. Subsequently, rules and regulations for those particular gear types must be followed. No doubt Alternative B 1g, which would restrict pelagic longline gear in the Gulf of Mexico year-round, would generate the maximum reduction in bluefin tuna discards, but it would have significant negative impact on the productivity of the domestic yellowfin fishery. 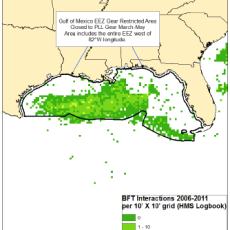 TBF would further support the establishment of a 4-month Gulf of Mexico longline closure (March-June). This closure would allow for more management flexibility and any changes in seasonal migrations of bluefin tuna in the Gulf of Mexico that may occur. Using the 2006-2011 logbook data, the additional month of June would reduce the bluefin tuna kept in the Gulf of Mexico by 13% (16% fishery-wide) and reduce discards by 12% (40% fishery-wide). The benefits for billfish from a 4-month Gulf-wide closure would nearly double compared to the 3-month closure with discards of blue marlin, white marlin, and sailfish reducing by 15%, 10% and 18% fishery-wide. The additional month would only have marginal impacts on target species compared to the 3-month Gulf of Mexico closure.

While TBF understands that a 6-month or 12-month longline closure in the Gulf of Mexico would be the most beneficial for bluefin tuna, billfish, swordfish, and other marine life, NMFS must balance conservation goals with realities  of domestic fisheries management and the need to harvest target species for the country to stay prominent in international fisheries negotiations. Closing the Gulf of Mexico year-round will provide a reduction of 21% in kept bluefin tuna and 12% in bluefin tuna discards. If a year-long closure is implemented, the yellowfin fishery would experience a 40% reduction in landings and swordfish landings would reduce by 15%. A year-long closure would provide minimal additional benefits to reducing bluefin tuna discards compared to a 4-month closure, one of the primary objectives of Amendment 7.

To limit the amount of dead discards and provide incentives for pelagic longline vessels to avoid bluefin tuna, NMFS proposes the use of ‘Individual Bluefin Tuna Quota’ (IBQ) in Alternative C 2. The objectives of the IBQ system are to limit the amount of bluefin landings and discards in the pelagic longline fishery, provide incentives for vessels to avoid bluefin tuna, and to balance the objective of reducing bluefin discards with optimizing other fishing opportunities. The proposed alternatives within the complex proposed IBQ system have several possibilities that address the vessels eligible to receive bluefin quota shares, the means by which quotas will be allocated, vessel requirements for an IBQ, the details associated with IBQ trading, and how the program will be evaluated in the future.

If an IBQ system is implemented for pelagic longline vessels to benefit bluefun tuna, a bycatch cap should also be established to benefit other species including billfish. Once vessels land all of their IBQ, they must be required to switch to approved alternative gear (buoy gear, greenstick, rod and reel) to continue fishing for yellowfin and/or swordfish. If a similar Billfish Bycatch Cap is established, vessels would be required to switch to approved alternative gear once reaching the cap. This would reduce billfish bycatch and decrease the post-release mortality of billfish hooked on alternative gears as compared to those caught by longline gear. [/expand]

TBF has prepared a handout that can be used to generate your comments through TBF’s Advocacy Center or at Public Hearings. Click here to read

Get up to date information on events, news, and research on a constant basis. Submit your email now to join our exclusive newsletter.
66TH ANNUAL GULF & CARIBBEAN FISHERIES INSTITUTE