UNDERSTANDING MAXIMUM SIZE IN THE CATCH: ATLANTIC BLUE MARLIN AS AN EXAMPLE 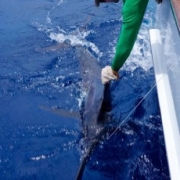 The most recent Atlantic blue marlin research completed by TBF’s Dr. Phillip Goodyear was published by the American Fisheries Society, the oldest, largest and most influential association of fisheries professionals in the world. Its mission is to improve the conservation and sustainability of fishery resources and aquatic ecosystems by advancing fisheries and aquatic science and promoting the development of fisheries professionals. 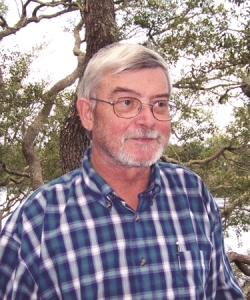 Goodyear’s research focused on the effect of fishing on the number of the largest fish in a population using Atlantic blue marlin as an example. Typically, fishing reduces the number of fish that survive to old age which also reduces the average age of fish available to be caught. In most species this also significantly reduces the mean size of the catch which is an important indicator of stock health. However, in earlier research Goodyear discovered that mean size is a poor indicator of population health in fast-growing species like blue marlin. This is a consequence of the fact that the fast growth of young fish reduces the difference between the size of the very old and young fish. Hence the average size can’t change very much when fishing removes most of the old fish from the population. This phenomenon lessens the utility of mean size as a population metric for stock assessments. Still, the abundance of the oldest and very largest fish does decline even in fast growing species, but there has been no statistic to quantify this phenomenon for use in stock monitoring or assessments.

Goodyear’s newest publication developed a new statistical measure (NZ50) to fill this gap, and showed it to be a sensitive indicator of excessive fishing. NZ50 is the smallest number of observations required of a sample (from the catch or population) required to include at least one fish of some particular large size half the time. Think of it as the statistical measure of the number of fish an average angler would have to catch to have a 50-50 chance of catching a “grander” at different population levels. Goodyear’s illustrated the statistic with data from a simulated hypothetical population modeled after Atlantic blue marlin. The results showed NZ50 to be a much more sensitive measure than mean size for judging population status. He concluded that this new statistical measure would be useful for monitoring stock recovery and that it should be routinely included in stock assessments.

Get up to date information on events, news, and research on a constant basis. Submit your email now to join our exclusive newsletter.
BLUEFIN TUNA REC. RETENTION LIMITS