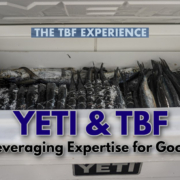 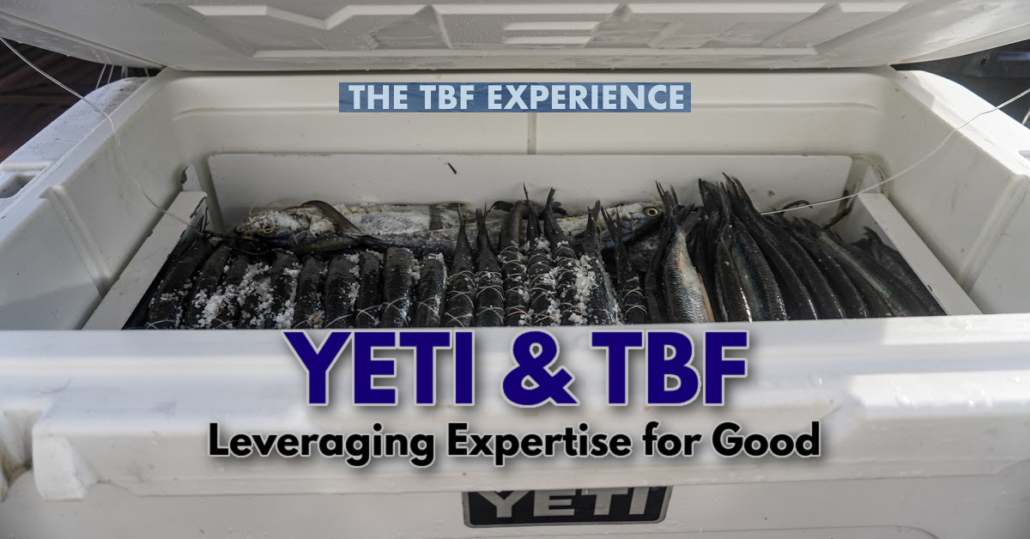 The partnership between YETI and The Billfish Foundation is a new, modern take on conservation– one that leverages expertise and the power of consumer markets.

What is the first thing that most people think when YETI comes up in conversation? There are a few iterations but the general sentiment is usually something like, “cool”… or “awesome”… or maybe “they make badass stuff.”

Building on the foundation of coolers that keep ice for a long time and are strong enough to become part of your boat, YETI has redefined what you can expect from drink wear, duffel bags, buckets and even travel luggage (it’s pretty awesome stuff). Armed with its impossibly unique blend of on the water/in the woods credibility and social media shareability, the brand appeals to everyone from salt crusted captains, elk hunting guides who live in the woods for three month stretches, and, yes, even people who wear skinny jeans.

In addition to fundamentally changing how consumers view products, YETI has invited the mass market to experience the outdoor lifestyle. As every sportsman understands, the commitment to conservation and making the world a better place is a driving force behind what this lifestyle is all about. 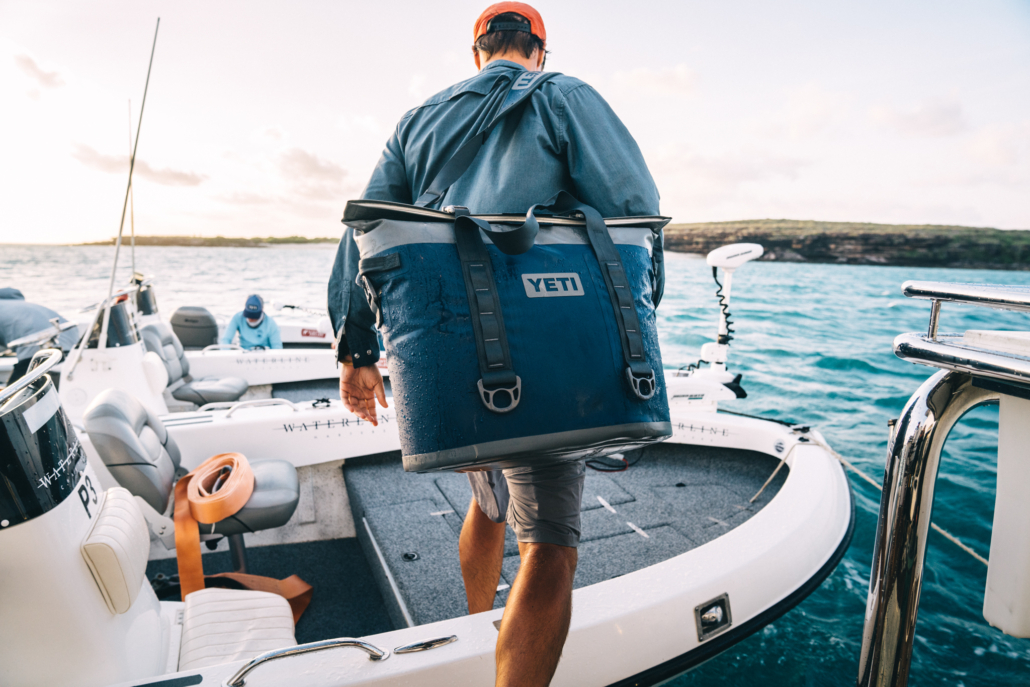 Leveraging its cross-spectrum network of fans, YETI’s support for conservation involves more than simply writing checks and sending coolers. When YETI stands behind something—and runs the cause through its channels—the net effect often involves the introduction of the cause to people who may yet to have considered its importance.

What follows is the story of the decade long partnership between YETI and The Billfish Foundation. Not your grandfather’s conservation story, this one involves the new and uniquely social take on making the world a better place.

The YETI brand is something of a cultural phenomenon. Beyond the exponential growth and its redefinition of an entire category, the most interesting thing about YETI is its broad, universal appeal.

Armies of MBAs and Madison Avenue types have analyzed YETI’s marketing approaches. Knock off artists of all ilk have found themselves making cups, coolers, and bags that look remarkably similar as those produced by the folks in Austin. Somehow, however, none of them seem quite as cool.

The foundation of all of the articles written about YETI, the billion-plus dollars in 2020 sales, the international network of support—and even the hordes of knock offs– is both simple and profound. YETI was founded by brothers Roy and Ryan Seiders– lifelong hunters and fishermen who came by their involvement in the outdoor industry naturally. 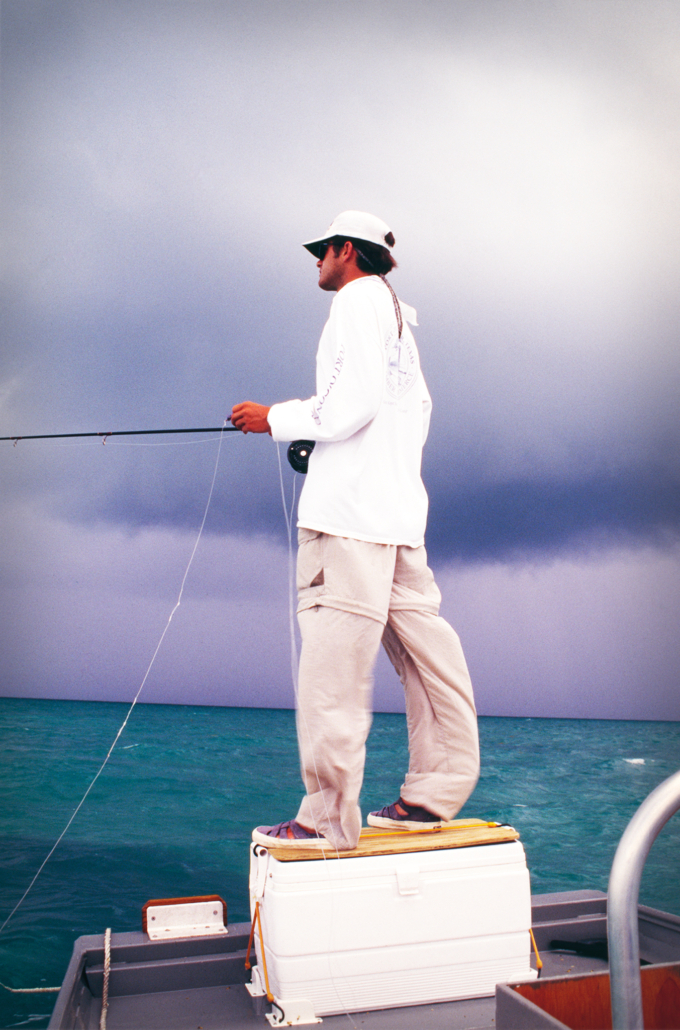 The inspiration for YETI came in the form of a traditional cooler reinforced with plywood.

The inspiration for the first YETI came in the form of a beat-up old cooler that was reinforced with plywood so that it could serve a platform on a flats boat. The strength and insulation of the cooler they made, not only kept ice longer but provided the strength to support the weight of a grown man as he searched for tailing reds.

The inspiration to “make something better” spawned the first cooler. This commitment is the unifying force that binds YETI’s expansion into ever broader product categories and customer demographics.

When we asked Jake Drees, YETI’s Fishing Marketing Manager, about the secret behind the brand and its broad appeal, his answer was straight forward. “The sauce is not as complicated as you might think. It stems from Roy and Ryan and their passion to make something that changed the game for something they loved. They both fished.”

Conservation: More than A Marketing Approach

As any sportsman worth his salt understands, conservation is more than a passing hobby. For companies operating in the outdoor product space, making the world a better place for those who use their products is part the business model. YETI’s support for conservation began in the company’s early days. 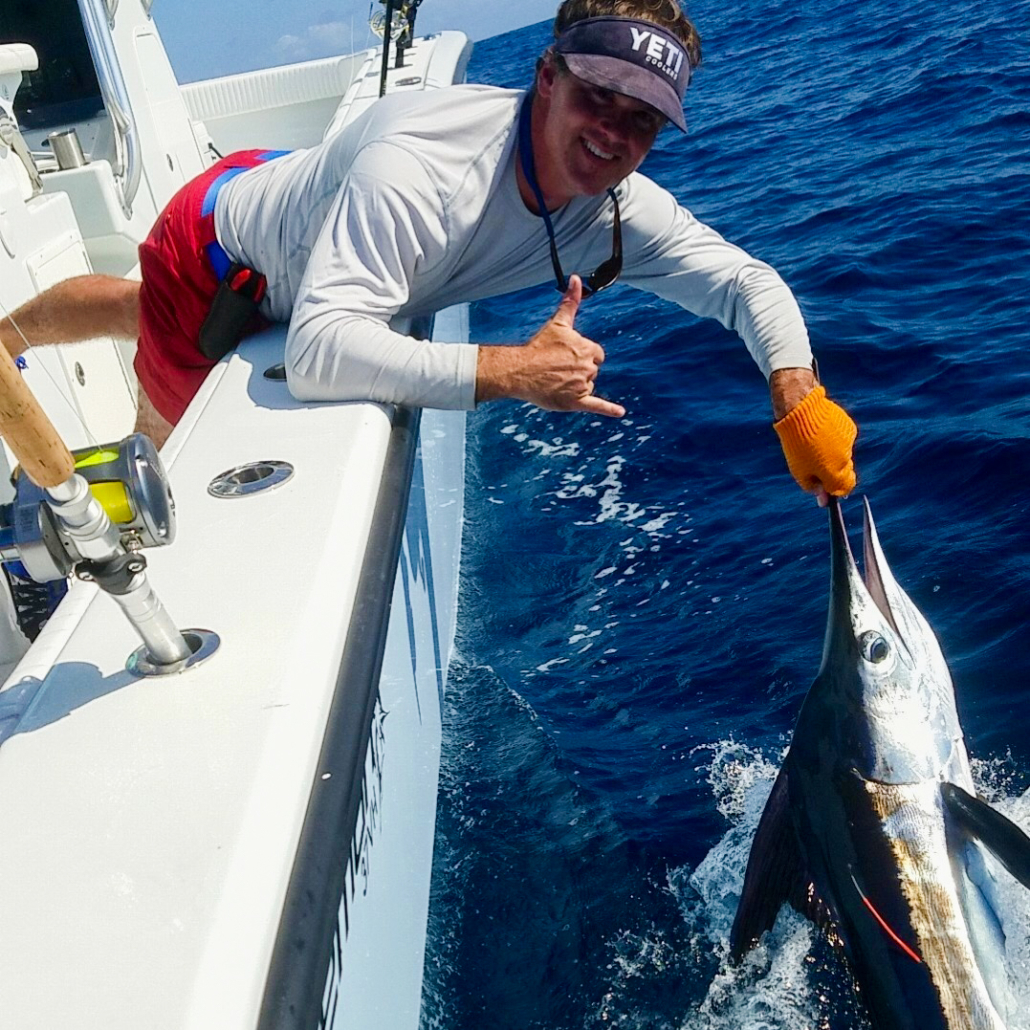 David Bullock, with a white marlin he tagged aboard his 37′ Freeman in Texas.

David Bullock is the former CFO of YETI. His contributions to the brand are widely recognized and appreciated. Beyond helping lay the foundation for YETI’s incredible growth, Bullock was also involved in the company’s early support for conservation—including its relationship with The Billfish Foundation.

“I like to fish and to fish offshore. That’s how I was drawn to YETI,” Bullock recalls. Prior to working with YETI, Bullock lived in Fort Lauderdale, Florida.

A Deep, Personal Connection to Fishing

“My boss at the time was from Texas. He had a second-generation YETI cooler—a Sherpa—on his boat in 2006. I moved back to Austin where I previously earned an MBA from the University of Texas. It was through a business school friend that I met Roy and Ryan,” Bullock recalls.

“I had known of YETIs from my time in South Florida. That planted the seeds before I joined the company in 2009. Part of joining was the personal fit—the passion for fishing. At the time we were defining the vision of the company. A product made for people like us who want the best experience for their time on the water,” Bullock recalls. 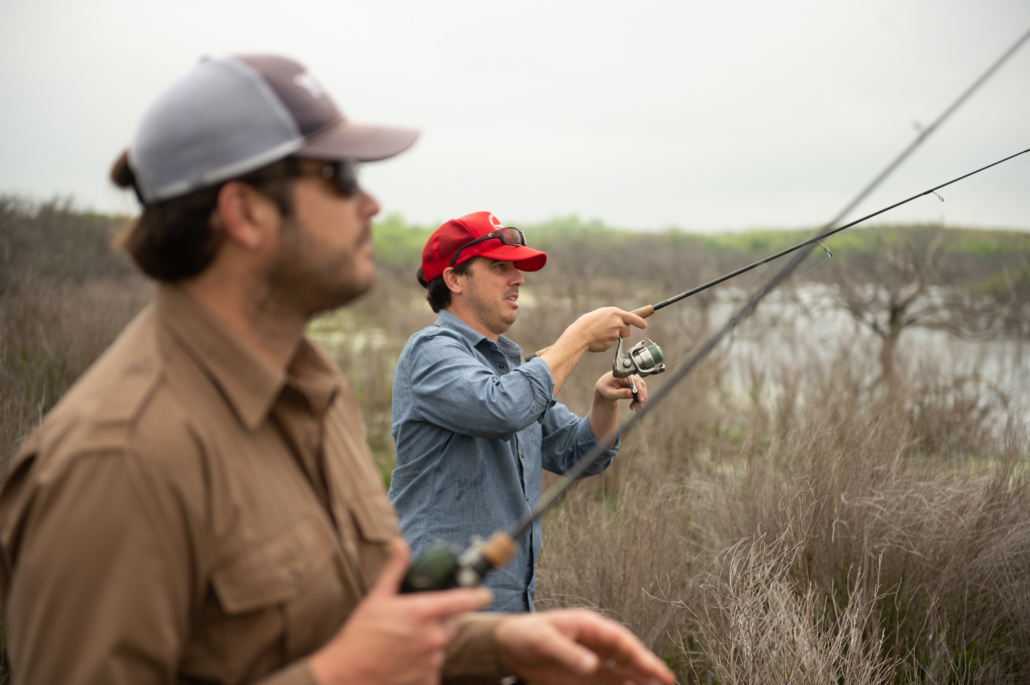 “Ryan Seiders and I were the fishing marketing guys. It was double duty with my role as CFO,” he says. “We first started with cause marketing in 2013/14. The management team had board meetings to bring forth ideas for non-profits in the fishing industry. TBF was on the short list—a list of four from our core hunting/fishing/general outdoors markets.”

“We wanted to give back to organizations that are in line with our core consumer group,” Bullock explains.

YETI and The Billfish Foundation

“The Billfish Foundation stood out… it’s tagging program and innovative research programs,” Bullock recalls. “Tagging makes it easy to get involved. The release certificates are great for kids and youth.”

Beyond the conservation benefits associated with catch and release, Bullock valued The Billfish Foundation for its positioning and platform within the sportfishing industry. “Blue marlin are the pinnacle. Whether or not someone ever gets to catch one, they are aspirational.”

“TBF is great. It has a great logo and it connects with aspiring offshore fisherman and the dreamers,” Bullock explains. “That matches YETI’s positioning in the market. YETI is aspirational as well—we make the best gear for you to pursue your dream.” 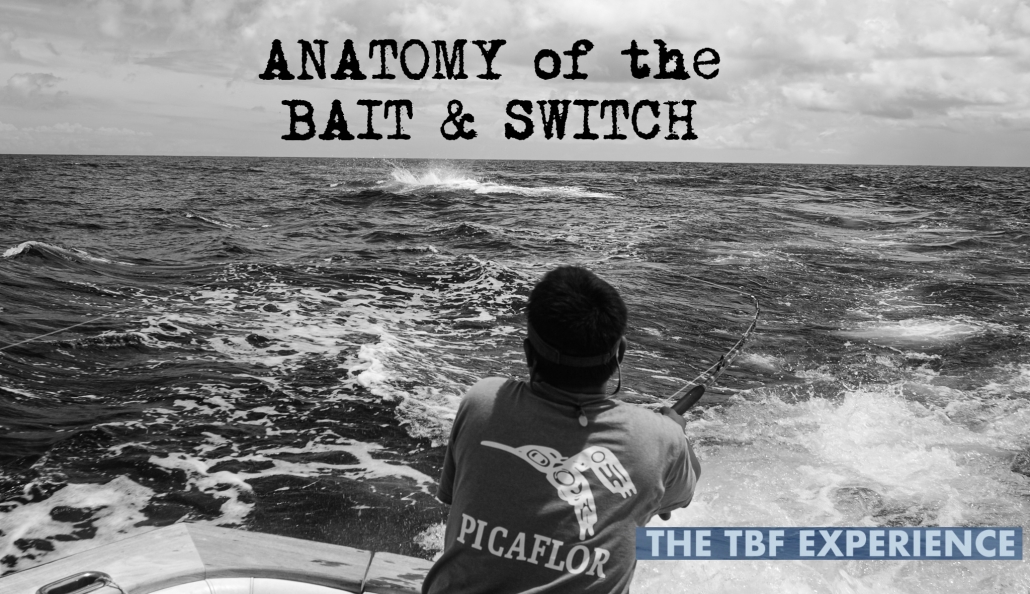 Membership to The Billfish Foundation makes you part of the most exciting thing in the world. How exciting? Read “The Anatomy of the Bait and Switch.”

From its origins in 2013, the partnership between YETI and The Billfish Foundation has grown into a mutually beneficial working relationship. Jake Drees understands marketing within the sportfishing industry better than most.

His take on the dynamics of the relationship provides unique insight into how conservation works in today’s modern, socially-driven world. It is interesting. 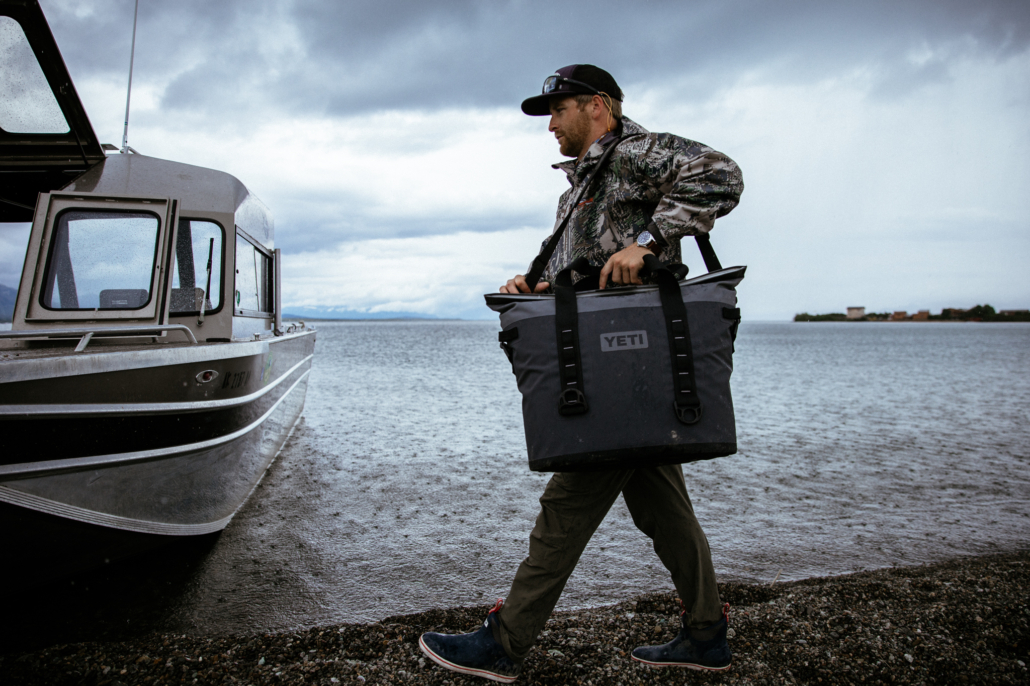 Jake Drees, YETI’s Fishing Marketing Manager, is a thoughtful guy with his hand firmly on the pulse of the fishing industry.

“The Billfish Foundation is a specialist for us. It has been a sounding board for types of marketing that resonate. Not only do we donate cash and gear sponsorship, but with TBF it is a true partnership. The benefits flow both ways.”

“YETI started with Roy and Ryan Seiders asking, ‘What on a boat is not perfect? How do we make it better,’” Drees explains. “YETI makes stuff that lasts, that’s durable and that solves problems. It started with the cooler, then cups and buckets, now its luggage. We look at stuff that breaks and figure out how to make it last.” 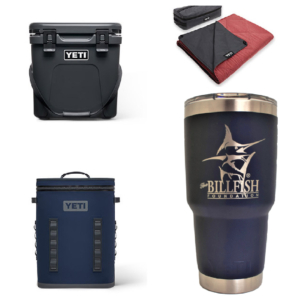 “Roy would come back from a trip and say, ‘We need to make this (insert—cup, duffel bag, bucket) and make it better.’ You can think of YETI as an engineering design firm. We have a huge innovation center—it’s an engineer’s playground,” Jake describes. “We start out with high quality products and then test them rigorously before they go to market.”

The commitment to doing things right extends to everything that the company does. “We dump lots of time into investing in the right people to represent us. We have a hyper focus on authenticity—and avoiding fluff in products and marketing,” Drees explains. The long-term partnership between The Billfish Foundation and YETI derive from this same approach.

While the YETI’s authenticity and passion remain as resolute as ever, sales and mass appeal inject resources that make doing and making good things ever more possible. It is here that economies of scale meet conservation. It is a fascinating place. 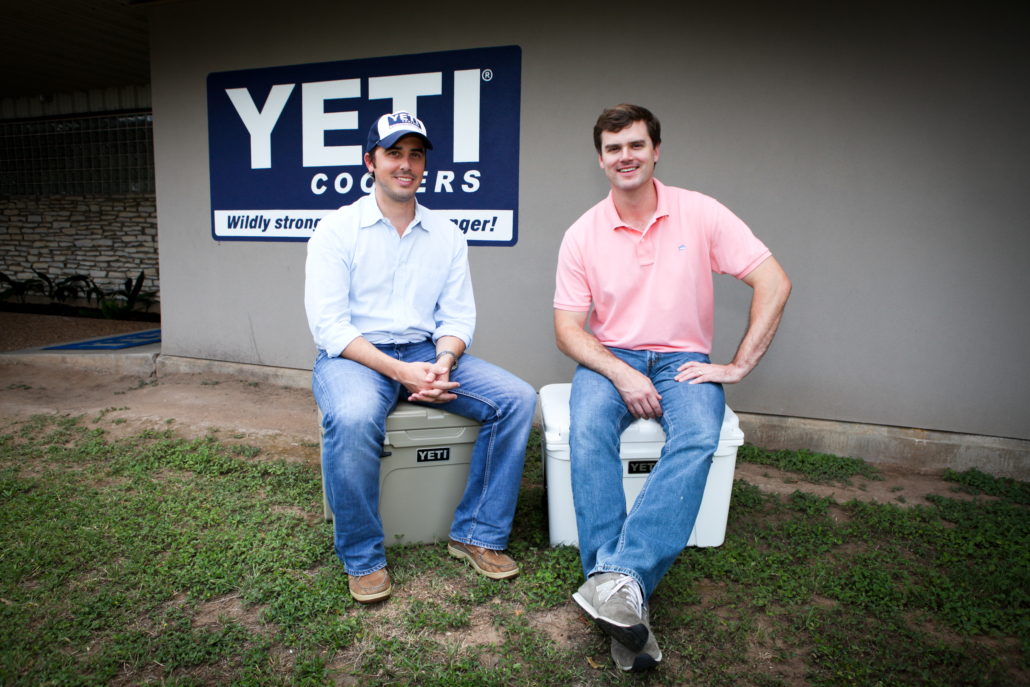 Business success is often the primary differentiator between the “philanthropist” and the “volunteer.” While the passion of the volunteer might be greater, a successful business provides heightened network, profile and resources.  These fruits of success provide the means to make the world better on a larger scale than that made possible by passion alone.

When success happens to a group of people who deeply care about a cause or activity, the resulting combination of passion and resources can do great things. This perspective offers insight when it comes to considering YETI.

In the 15 years since its founding, the brand has literally taken over the world. As YETI’s product offerings extend beyond the confines of its fishing and hunting heritage, the company’s commitment to making the outdoor experience better remains as resolute as ever. 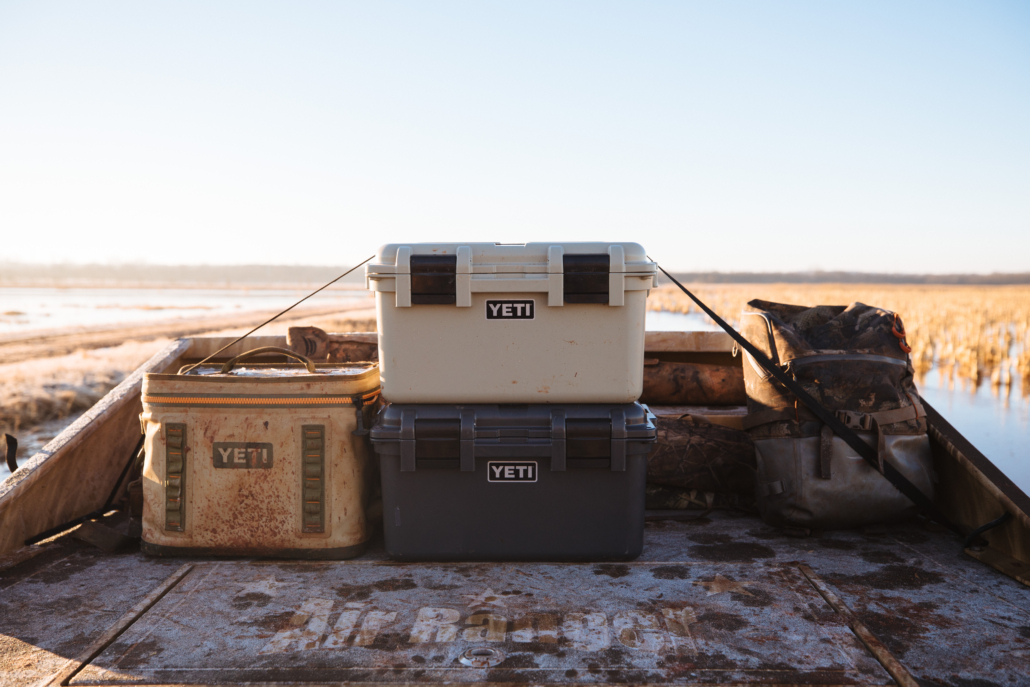 “We have been working with conservation organizations for most of YETI’s history. Now we are redefining how we tell the story of sustainability. We have recently hired a VP of sustainability and have a 10-year plan to make more sustainable products and how to do more for the environment,” Jake Drees explains.

For a company whose pedigree lies in revolutionizing the product landscape, such a commitment means very exciting things. This excitement resonates throughout the partnership between YETI  and The Billfish Foundation.

The relationship between the two has long been defined by leveraging commitment, expertise and authenticity for the betterment of the fish, habitats, and communities that comprise the sportfishing industry. The future promises more of the same… only better.

Buckle up, it’s going to be a wonderful ride.

Get up to date information on events, news, and research on a constant basis. Submit your email now to join our exclusive newsletter.
Join. Win.