The Fishing Life and Legacy of Jack Duvall 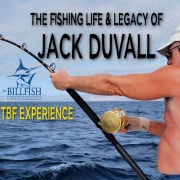 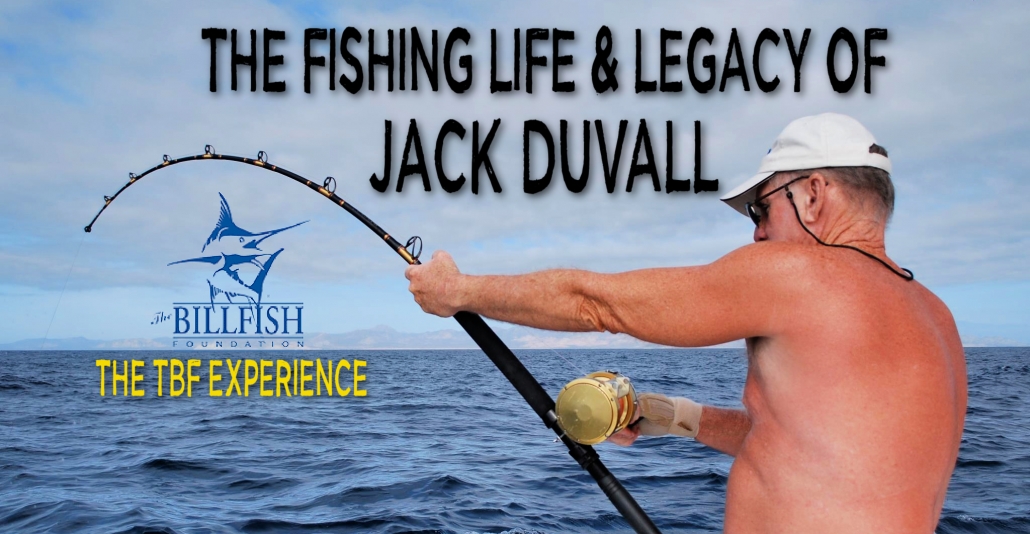 The Billfish Foundation recently presented the Jack Duvall Award to the angler who tagged and released the most striped marlin in the Pacific Ocean. It was not the first time that the striped marlin trophy was engraved with Duvall’s name—and it certainly won’t be the last.

During his life, Duvall won top striped marlin tagging angler so many times that nobody is quite sure of the exact number. Jack, a two-time Chairman of the board for The Billfish Foundation, died in January 2021.

A successful business man, Duvall leaves a sportfishing legacy marked by intensity in all things necessary to excel at his chosen craft (to be sure, Duvall was a Hell of a good angler) and for his commitment to conservation. Many talk about the future of fishing– expressing the hope that conservation measures can protect resources for generations to come. Duvall, took this a step further.

What follows is a profile of Jack Duval’s life in fishing and the legacy he leaves in its wake. Jack Duvall’s lifetime of passion and commitment to billfish will live on through the stories people tell about him and the bequest his estate leaves The Billfish Foundation.

An interesting, intellectually astute man, John followed earning a philosophy degree from Auburn with a distinguished career in the US Marines. By the time of his medical retirement, Duvall was involved in high level military planning for the US withdrawal from Afghanistan. He shares his perspective on his father’s life and passions with uncommon insight, generosity and candor. 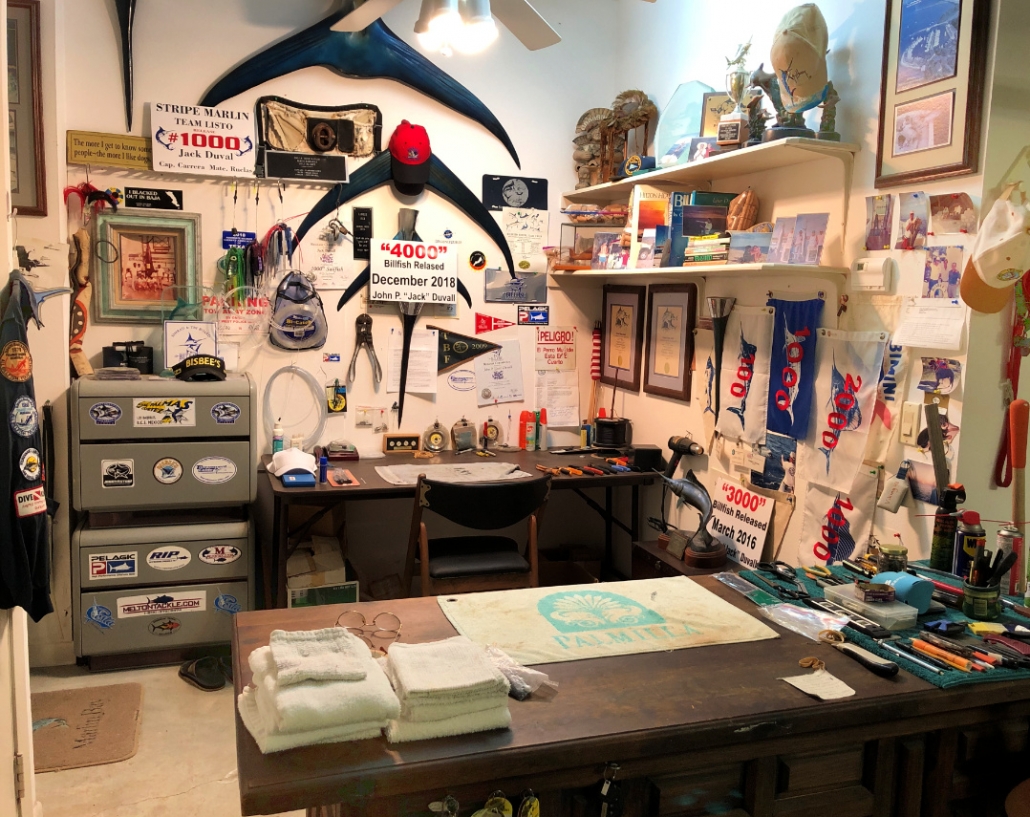 Jack Duvall’s tackle room, complete with a lifetime of memories.

“My father grew up in Jacksonville, Florida. He fished a bit on the St. John’s River and in the Everglades. He and my mother used to go to Bimini—to the Bimini Big Game Fishing Club—in the early 1970s,” Duvall begins. “It was there in 1973 that my father caught a 454-pound blue marlin—his first marlin.”

That fish made quite an impact. First marlin are known to do that sort of thing.

“My parents started going to the Bimini Big Game Fishing Club to fish the tournament circuit. They would fish there three or four times a year,” John recalls. “He bought his first boat—a 36 Hatteras called the Sudden Death—in the mid-70s. He kept the boat between the Keys and Bimini.”

“In the late 1970s and early 80s Bimini was a way station for lots of drugs. It wasn’t uncommon to see bales of marijuana or cocaine floating, wrapped in garbage bags. He started looking for other places to fish,” John recalls. “The first time he went to Cabo was 1983.”

The TBF Experience profiles the lifestyle and excitement that conservation makes possible.

A lifetime in fishing often involves a series of evolutions. For Jack Duvall, this was no exception.

“When he came to Cabo, my father started fishing for himself instead of for tournaments,” John relates. This involved catching, tagging and releasing the many striped marlin that he encountered around Cabo San Lucas, Mexico.

For Jack Duvall, being good at the art of billfish fishing was as important as catching lots of fish. He was not one of the boat owners who let the crew hook and hand fish—only to take all of the credit.

He devoted himself to being a great angler—and everything that goes with it. “I have six logs that span decades,” John says of his father’s estate. “What he caught the fish on, the fight time, the tackle, the weather conditions. He took copious notes.” 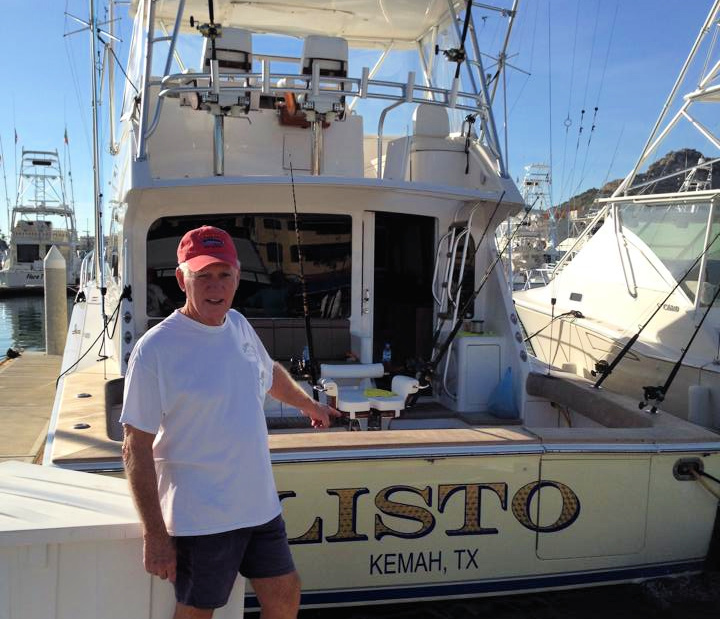 Duvall and the Listo in Cabo San Lucas.

From the time that Jack Duvall went to Cabo in the 1980s, fishing was his only hobby. “He had no interest in any other kind of fishing… Only billfish.”

“He built his own lures and customized his tackle—so that it was just how he liked it,” John says of his father. “He liked the fight– he couldn’t think of anything better than watching the lures and looking for fish to cast to.”

Commitment to and Mastery of the Craft

“It’s nice when you love something and you are really good at it. Many people love something—art, music, and the like. My father came as close as you can come to mastering it,” John says. “He never stopped learning. To him, that was it.”

Later in his fishing career, Duvall would meet Captain Brad Philipps in Guatemala. He would fish with Brad twice per year. 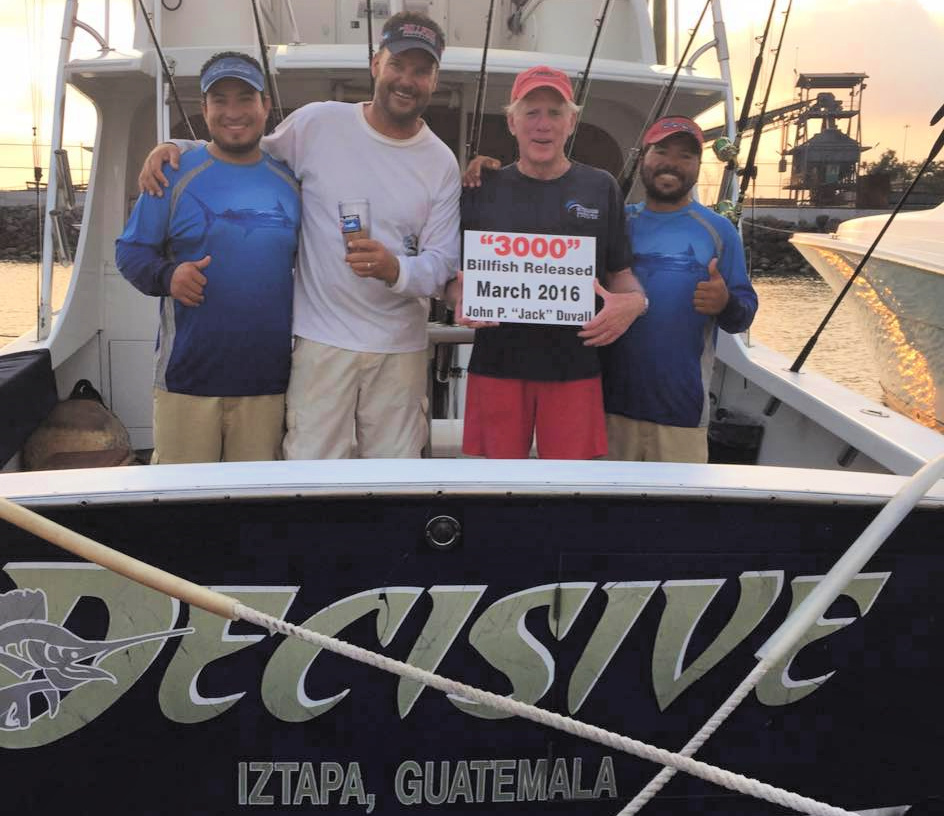 His mastery of the bait and switch—hooking fish off of the teaser and fighting them stand up, on full display. In their best day together, Philipps and Duvall released 76 sailfish. Duvall was the single angler—he hooked and caught them all.

A Lifetime of Dedication

The result of Duvall’s dedication is manifest not only in the fulfillment he found in time on the water, but in his catch statistics. He caught more than 4,000 billfish in his lifetime. Jack Duvall is a member of the IGFA’s Billfish Royal Slam Club and tallied eight billfish grand slams—including two on consecutive days.

“He was a single angler guy. My father fished stand up, with no chair. He fished 20 and 30-pound, with a 50 mixed in sometimes. He hooked all of his own fish,” John says. 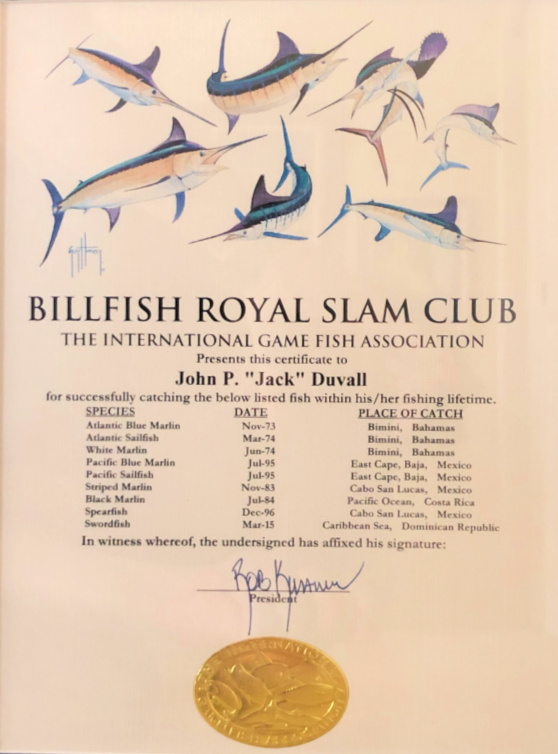 The IGFA’s Royal Slam certificate is given to anglers who catch all species of billfish.

“He learned to work with the crew to catch fish. He would catch 500, 600 and sometimes 800-pound fish in 10 minutes,” John recalls of his father. “My father enjoyed being in the cockpit by himself. He didn’t want to talk. Of billfishing, he would say ‘It’s hours of boredom for moments of delirium and excitement… And its worth it every day.’”

“He moved to Cabo full-time in the 90s. He sold his chemical manufacturing business and retired early. My father would spend his summers on the East Cape in Los Barriles and winters in Cabo proper,” John recalls. “He started his own tournament, Noche de Brujas (Night of the Witches), on Halloween. He’d invite his friends down and they’d fish for a week. The only rule was that there were no rules.”

After several years of living in Cabo, Duvall returned to the states and to business. He founded a life insurance business, Bluewater Financial, in the Houston area.

“He continued to fish. Each year he would pick an unusual spot—Hawaii, the Galapagos, Bermuda—all over the Caribbean.”

The Billfish Foundation and the Future of the Sport

“He was involved with The Billfish Foundation for a long time. My father won the Pacific Striped Marlin Top Angler Award multiple, multiple times. He prided himself on that,” John says of his father. 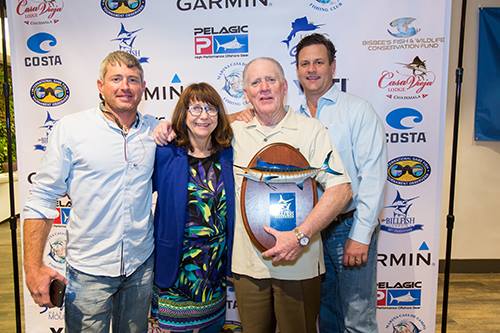 “He talked with (TBF President) Ellen Peel about leaving a bequest from his estate. He did that. My father was Chairman of the Board twice. When he passed, he was in his second term,” John explains. “It was a long time since he killed his last fish. He preached TBF’s values everywhere he went.”

Duvall was a vocal advocate for conservation– on his boat, in the press and in his actions. Here is an article from Marlin Magazine in which he shares his views on killing billfish. The Houston Chronicle profiled Duvall and his views on billfish conservation in 2013.

“My father was not one for pomp. The awards were nice, but not what he cared about,” Duvall recalls of his father. “He loved TBF.”

“He had known Ellen for years. My father fished on Win Rockefeller’s boat in the San Juan International. He was also friends with Lester Hemingway, Ernest’s brother,” says Duvall. “My father became a member of The Billfish Foundation early on. He was committed to protecting fish for future sportsmen.” 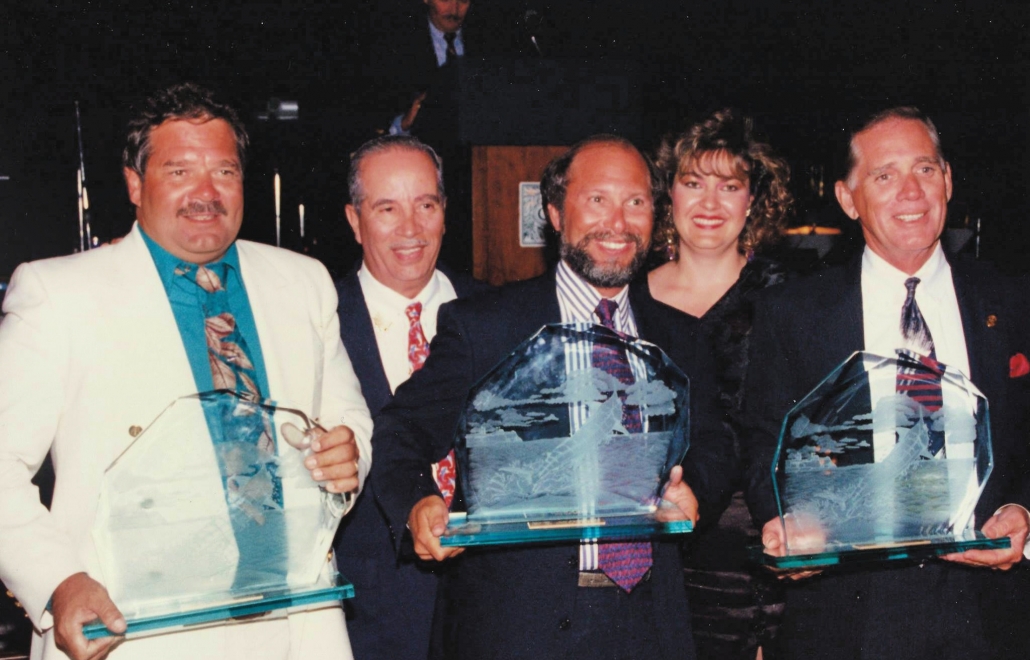 “A lifelong sportsman, my father taught me everything. Travel and fishing are a great form of education for a child. It was a great opportunity for me,” says John Duvall of the impact fishing had on his family.

It is not uncommon for fishing to contribute fulfillment to the lives of those who love it. Such fulfillment is evident when recounting the life of Jack Duvall.

The themes of commitment, dedication and seriousness of approach connect the stages of Jack Duvall’s life in fishing. These themes do not end with his passing.

Through time, The Billfish Foundation’s Jack Duvall Striped Marlin Award will not only recall a man who was committed to mastering his craft. It will also reflect the same man’s commitment to ensuring the opportunity of future generations to enjoy the same fulfillment that brought so much to his own life. 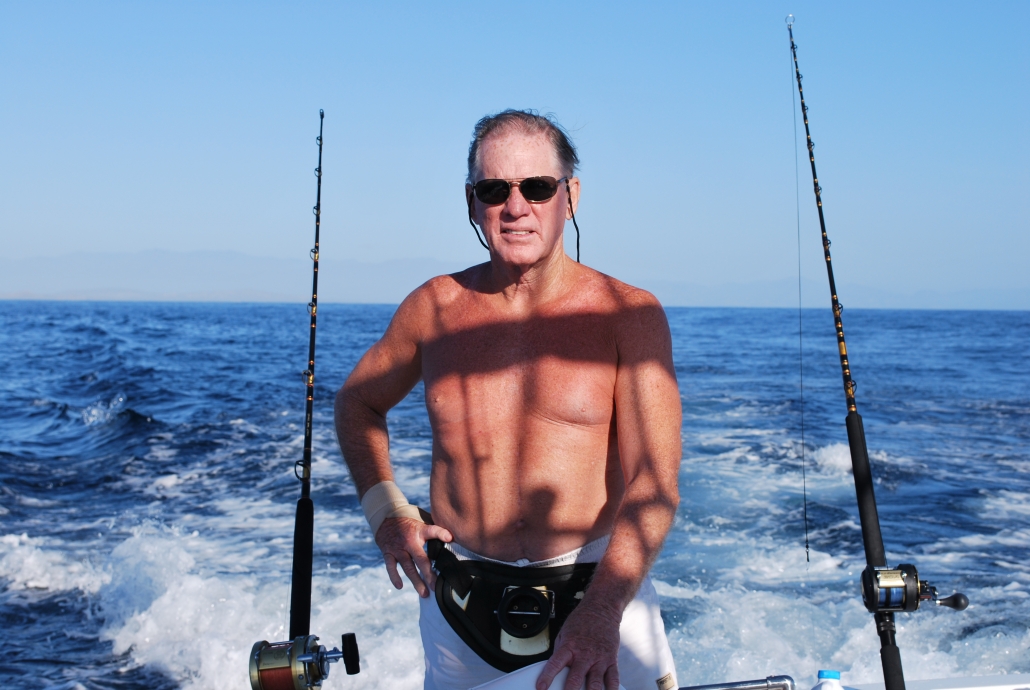 From standing alone in the cockpit for hours, staring at lures to committing resources from his estate to benefit the fish that he loved, there was no nonsense in Jack Duvall. His attention to detail, focus and skill will be missed.

Get up to date information on events, news, and research on a constant basis. Submit your email now to join our exclusive newsletter.
Market Disruption, Conservation and Cool: The King Sailfish Mounts Story

Conservation Through Sportfishing
Scroll to top