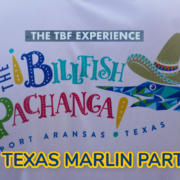 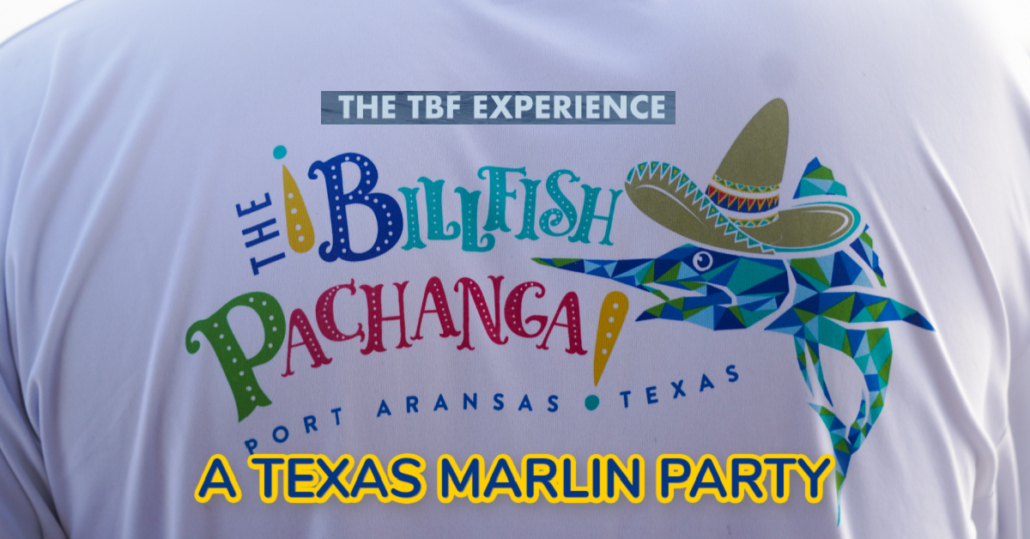 The Billfish Pachanga is a Texas marlin party that showcases conservation and highlights a wonderful way of living (and fishing) in a great part of the world.

Port Aransas, Texas is a fun place. Those who reside here are fun loving people, many of whom love fishing. Were that not enough, the waters surrounding Port Aransas support a well-rounded, highly productive offshore fishery.

This unique combination of attributes sets the stage for something unique in the sportfishing world. The Billfish Pachanga is more than a fishing tournament– it is an event. There are many neat things about it. 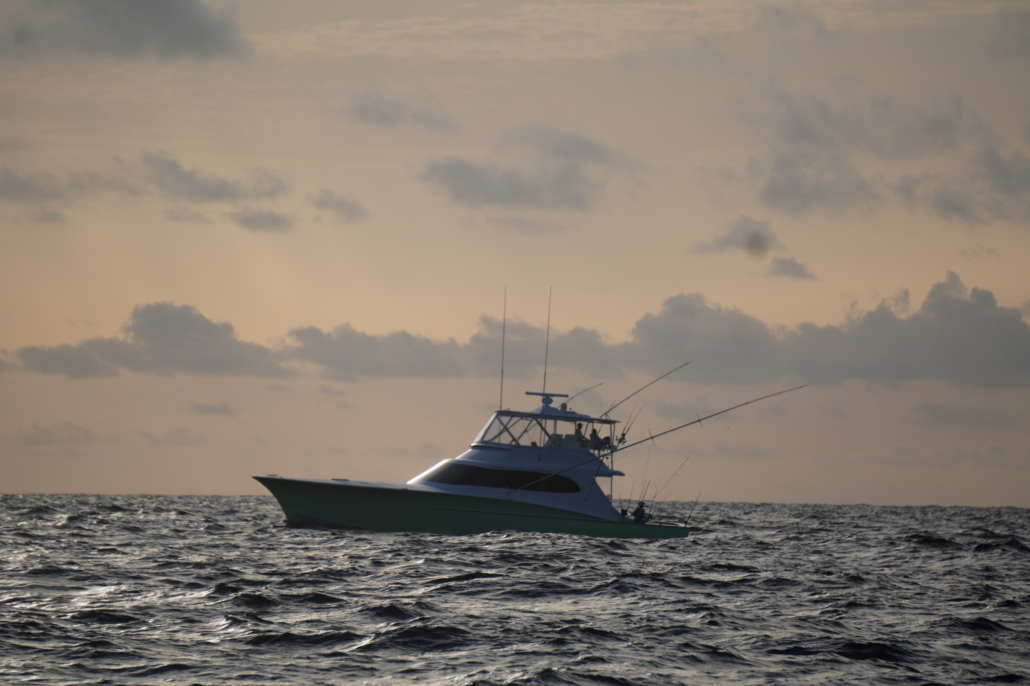 Let’s start with the most obvious… its name. Pachanga is a Mexican word that translates to party. The most commonly used word for party in Spanish is fiesta. And while a pachanga can be a fiesta, there is a difference.

What exactly is a Pachanga?

When some invites you to a fiesta you might check your calendar to make sure you don’t have other plans before committing. If someone invites you to a Pachanga, on the other hand, it doesn’t matter what else might be going on (insert: wife’s birthday, your anniversary, or Valentine’s Day) —you should really find a way to attend. When the pachanga is a Billfish Pachanga, drop everything else, it’s time to go.

The setting for the event is Virginia’s On The Bay—a waterfront bar and grill that includes a dock for sportfish boats. Business partners Patrick Wheeler and Gabe Goodman own the storied establishment. 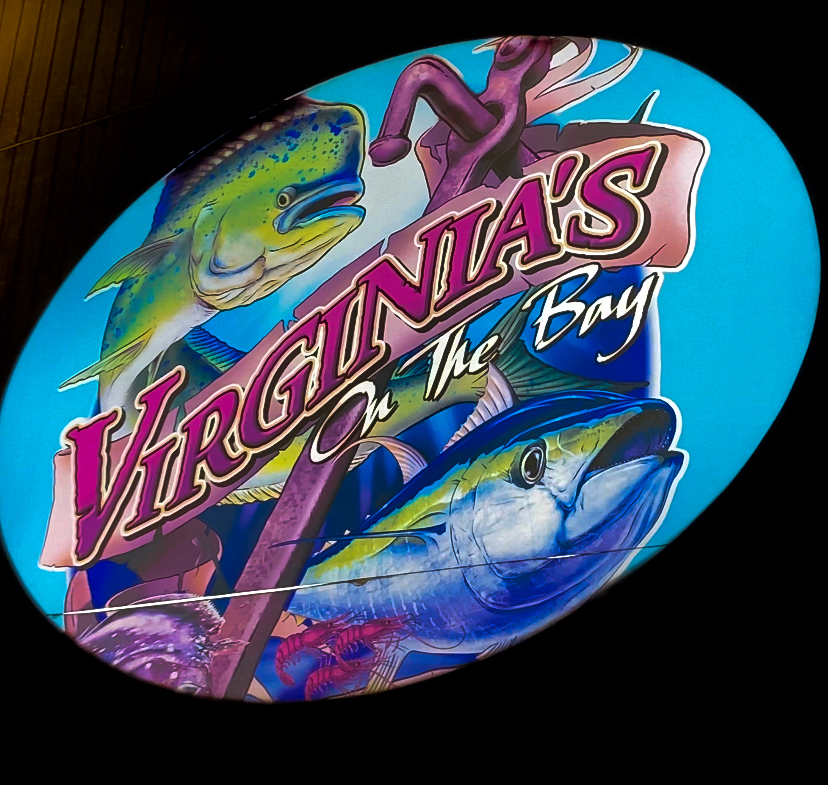 The atmosphere at Virginia’s is one that induces a good time most anytime you visit. The food is good, the beer is cold and the margaritas are colder. The docks are great and have easy access to the jetties that lead out into the Gulf.

Not only is the Billfish Pachanga’s setting ideal, but the people behind the event are perfectly reflective of Port Aransas (nice people who love fishing and know how to have a good time). The tournament committee includes Goodman and Wheeler, along with David Bullock and Chris Fox. 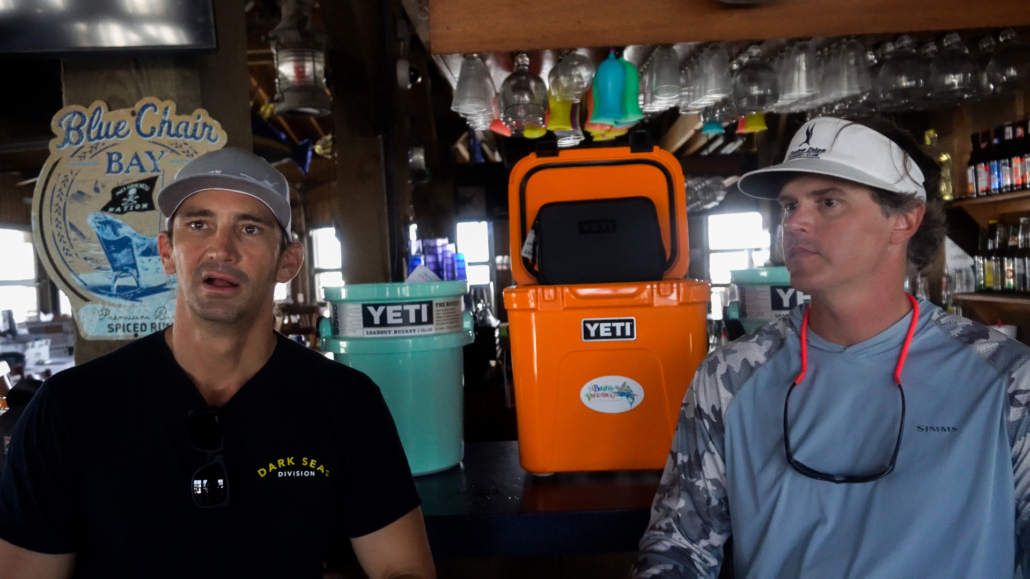 Tournament committee members Gabe Goodman, left, and David Bullock, right, breaking down how the Pachanga came to be.

The Occasion for a Tournament

With a great venue, a solid group of people, in a cool part of the world, all that was missing was the occasion to have a tournament. In step the Poco Bueno.

The Poco Bueno tournament was an institution for nearly 50 years. Poco was to the Texas offshore fishing community what brisket is to Texas barbecue.

In this part of the world, there are more legends about the Poco Bueno than there are about the Chupacabra. And that’s saying something. 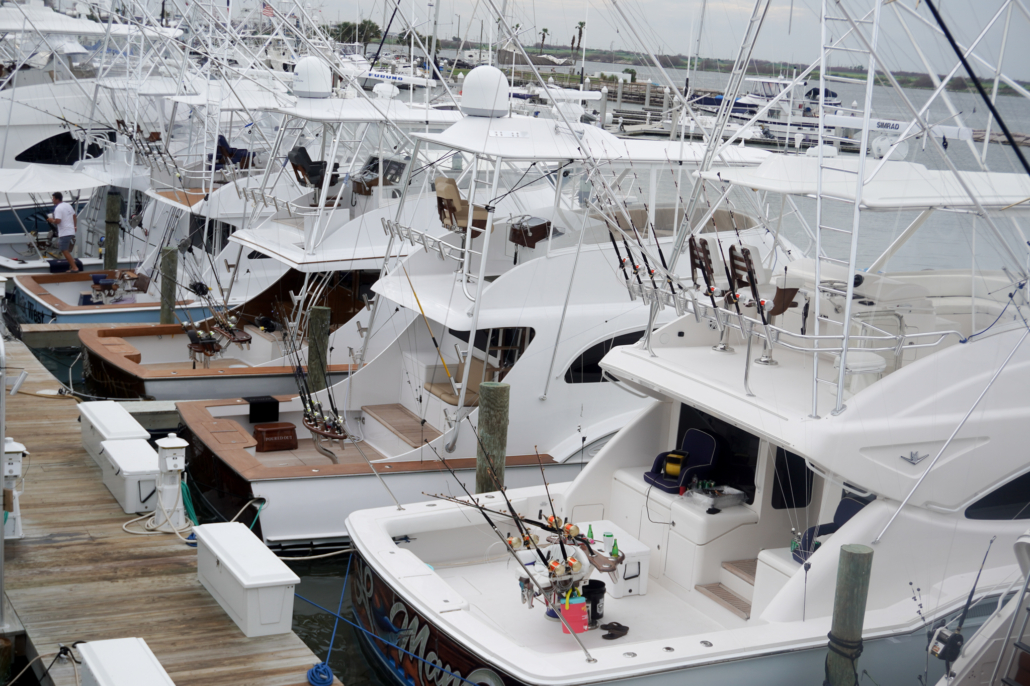 The dock at Virginia’s on the Bay in Port Aransas.

When the Poco Bueno Tournament decided to cease operation in 2019 there was an opening. To hear Gabe Goodman describe it, “A bunch of our friends came up to us and said, ‘You guys should make a tournament!’” The first Billfish Pachanga came in 2019 on the same weekend when Poco Bueno would have taken place.

With existing demand, an opening in the schedule, and an awesome venue, all the Billfish Pachanga needed was a format. To hear Gabe Goodman describe it, “We decided to create tournament that we’d like to fish.”

Here’s where it gets interesting. The tournament begins with a shotgun start. Who doesn’t love shotguns and racing sportfishers? We certainly do.

The next interesting thing is that it’s an all-release event. Whether it weighs 125 pounds or 850, all blue marlin are worth 300-points—and none of them come for a boat ride. White marlin and sailfish are worth 150 and 100 points, respectively.

Many Gulf tournaments these days feature teams slowly pulling 10-pound blackfin tuna trying to elicit a few big bites. The Pachanga, on the other hand, was won with dink baits and dredge fishing. 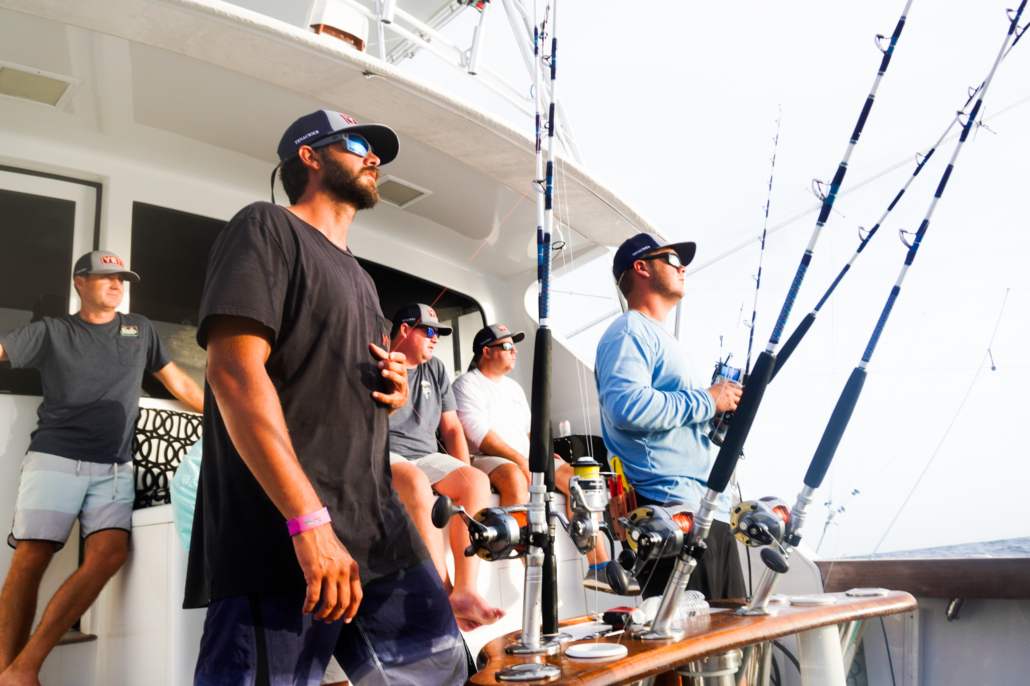 What’s more, these are not the only deviations from the standard Gulf tournament set up. The Pachanga also sets up a 100-mile fence around Port Aransas and caps the fleet at 40 boats.

The tournament boundary, reminiscent of places like Costa Rica, is a stark departure from some Gulf events in which boats leave from one state, do their fishing off another and then drive all the way back if they grease something big enough to weigh. The result is an intimate, fun event in which you can leave the flying gaffs at home and don’t need to strap 1,000 extra gallons of diesel on the bow. It’s a unique change of pace.

The next step in the process of creating the Billfish Pachanga lay in incorporating fun at just about every turn. First there is the logo. Not only is it awesome, the Billfish Pachanga’s sombrero-wearing sailfish will never run any danger of being mistaken for any other fish brand.

Colorful and vibrant, the Pachanga sailfish is ready to party everywhere it goes. That seems to be a common theme.

The tournament next focused on partnering with good and exciting brands. Rather than accepting sponsorship in the form of checks, the tournament committee requested that brands send gear. They then include it in angler buckers, raffle it and sell it in silent auctions. 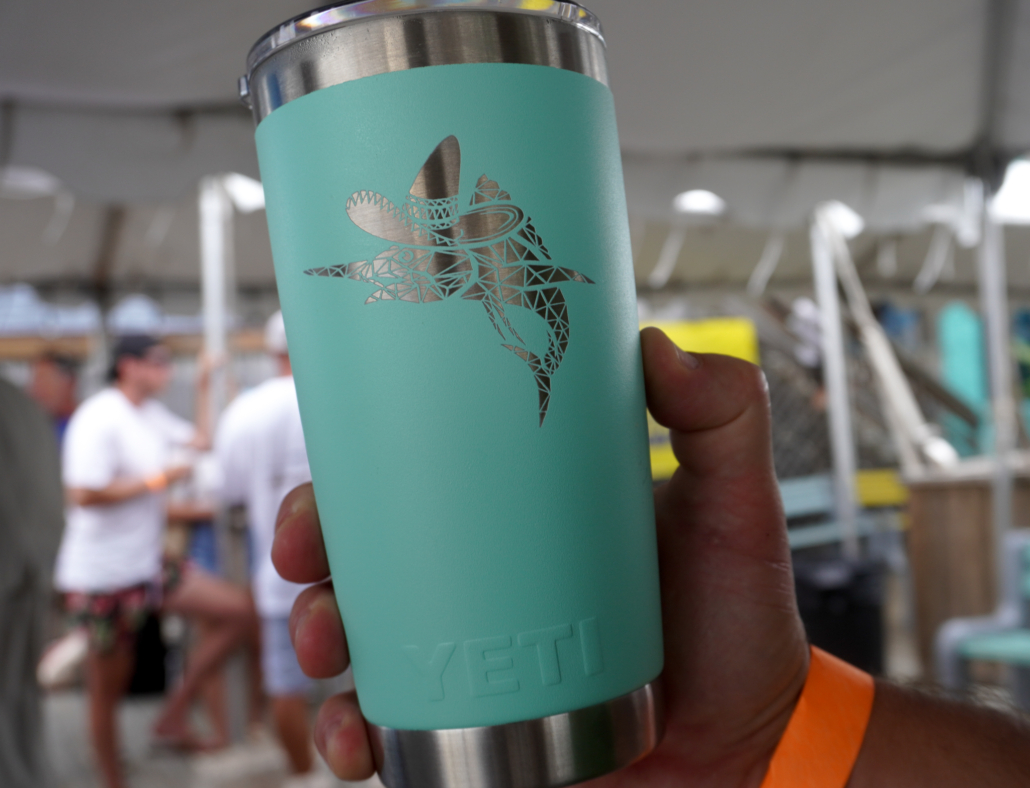 The Pachanga Sailfish and the Yeti Cup– a pretty cool pairing.

Yeti Coolers outfitted the Pachanga proudly and thoroughly. Costa Sunglasses was well represented as well.  Many others make it a cool experience as well.

Then there are the parties. Viriginia’s on the Bay plays host for all tournament activities. Virginia’s, perhaps the hottest ticket in Port Aransas during the summer time, actually shuts down for a whole midsummer weekend for the tournament. 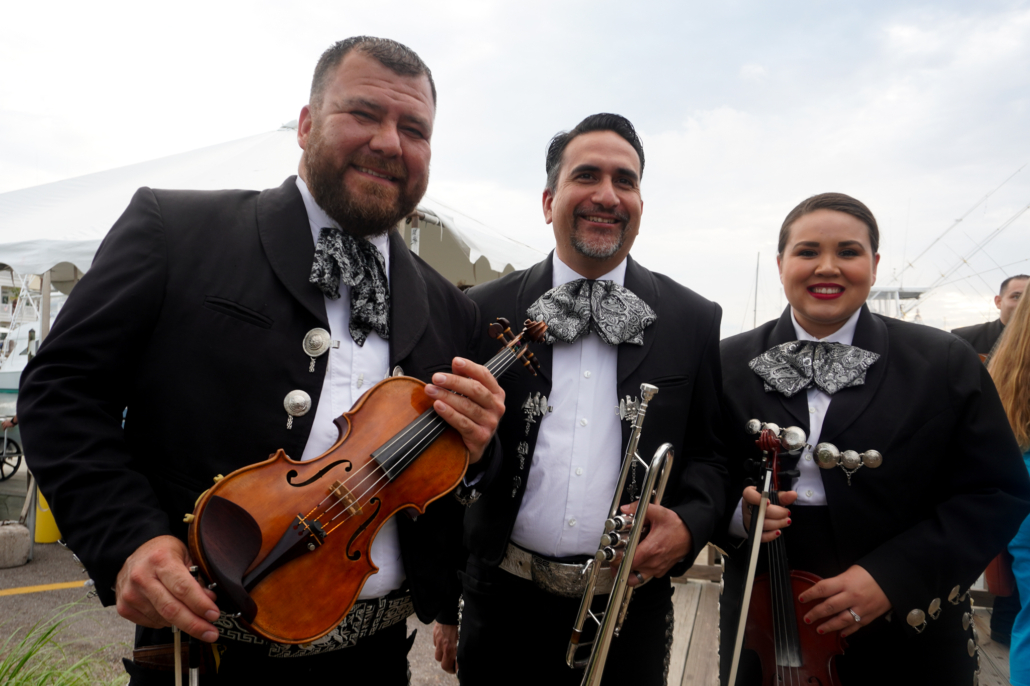 Everyone in the world enjoys a good mariachi band. Right?

The captain’s meeting is an open bar affair that hosts a fajita buffet—complete with beef, chicken, shrimp and all of the guacamole and salsa you need to make as many tacos as you feel like eating. After the rules are announced, next come the mariachis.

They sing long into the night, bringing their four-piece quarter table side to make sure the experience hits home. It really is a pachanga.

The fishing in the Pachanga follows the usual Gulf schedule. Shotgun start past the jetties at 12:00 pm on Thursday, back within the jetties at 3:00 on Saturday afternoon.

Boats then bring their video footage to the judges who verify the releases and tally all of the points on Saturday afternoon. The awards are given away Saturday night… just before the grand finale.

This year it was a private concert by Robert Earl Keen. Keen, best known for his song “The Road Goes on Forever and the Party Never Ends”, is something of a legend in Texas. He is as universally loved in these parts as Bluebell Ice Cream.

The concert stage is set up in the Virginia’s parking lot—100 yards from the dock, 50 from the restaurant. The tournament provides dinner for everyone, hands out some giant tournament checks and awesome trophies (with the Pachanga party sailfish on them), and then its concert time.

Robert Earl Keen put on a great show. Just to be sure that everyone had a good time, and perhaps to help with the dancing, the parking lot was dotted with tents that provide as many adult beverages as tournament participants care to consume. You can work up quite a thirst while fishing, after all.

Giving it All Away

After creating a well-rounded fishing experience—that includes a concert and party that will likely cause a wait list next year—the Billfish Pachanga turns around and gives all of the proceeds away. The tournament supports a hand full of charities and conservation organizations—including The Billfish Foundation. 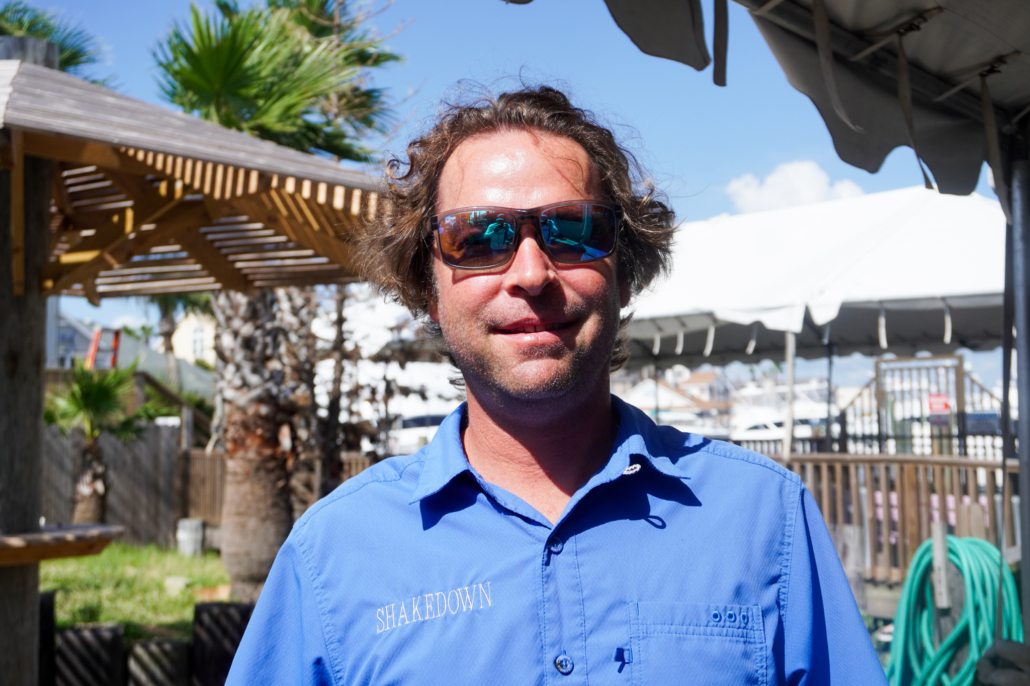 Patrick Wheeler, tournament committee member, is all smiles when talking about the Billfish Pachanga. With good reason….

TBF appreciates the support and tips its own hat to The Billfish Pachanga’s unique, fun and thoughtful approach to hosting a fishing tournament. The Pachanga supports conservation and shows how innovation of approach can create the type of community tradition that brings people back year after year. What’s more, the Pachanga is just getting started. 2021 was the tournament’s third year.

The TBF Experience was on hand this year. We’d like to thank Captain Vince Ciampa and the crew of the Tenacious for their hospitality in having me ride along and fish with them. 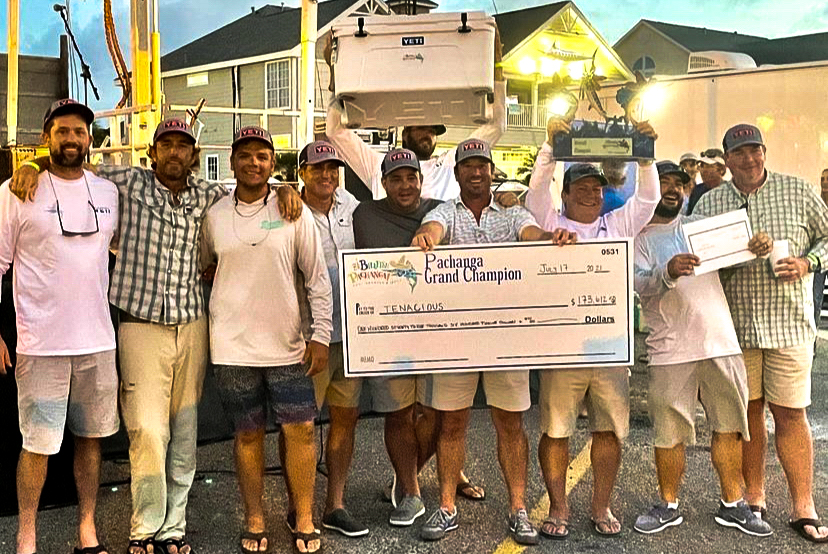 The catch won the team a giant tournament check worth north of $173,000. It really was a Billfish Pachanga.

Check out the Billfish Pachanga for yourself. You’ll be glad you did.

Elliott Stark is a consultant for The Billfish Foundation. He publishes FishTravelEat.com and operates Starkfish LLC, a consulting practice active in the fishing, conservation and tourism spaces. Elliott started his career with TBF from 2008-2012. He grew up in Texas, has fished on four continents, contributes to a number of publications, and would rather fish than eat.

Get up to date information on events, news, and research on a constant basis. Submit your email now to join our exclusive newsletter.
The TBF Experience: Cajun Canyons