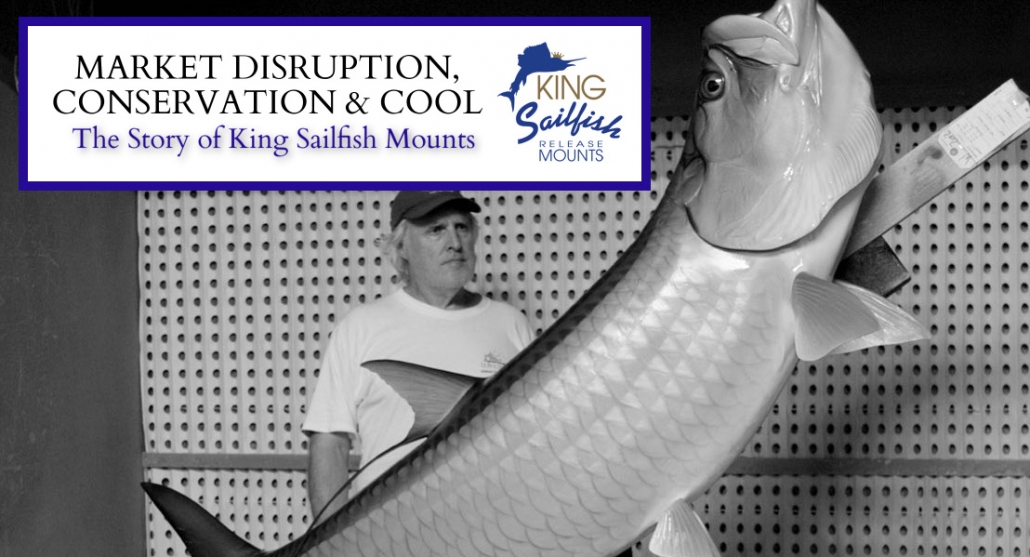 The quality and beauty of the mounts made by King Sailfish is evident to anyone who sees them—or has won a TBF Tagging or Release Award in past two decades. There is, however, much more to this shared mission than meets the eye.

Consider the central act that unites the two operations. Both TBF and King Sailfish Mounts celebrate, commemorate and empower the act of catching the most wonderful creatures in the world—marlin, sailfish and the like.

The intersection of fishing and conservation were central to the founding of both TBF and King Sailfish Mounts. The inspiration for TBF occurred to a group of passionate anglers and scientists while looking at a pile of dead marlin at a billfish tournament in Puerto Rico in the mid-1980s. King Sailfish Mounts’ inspiration was similar. 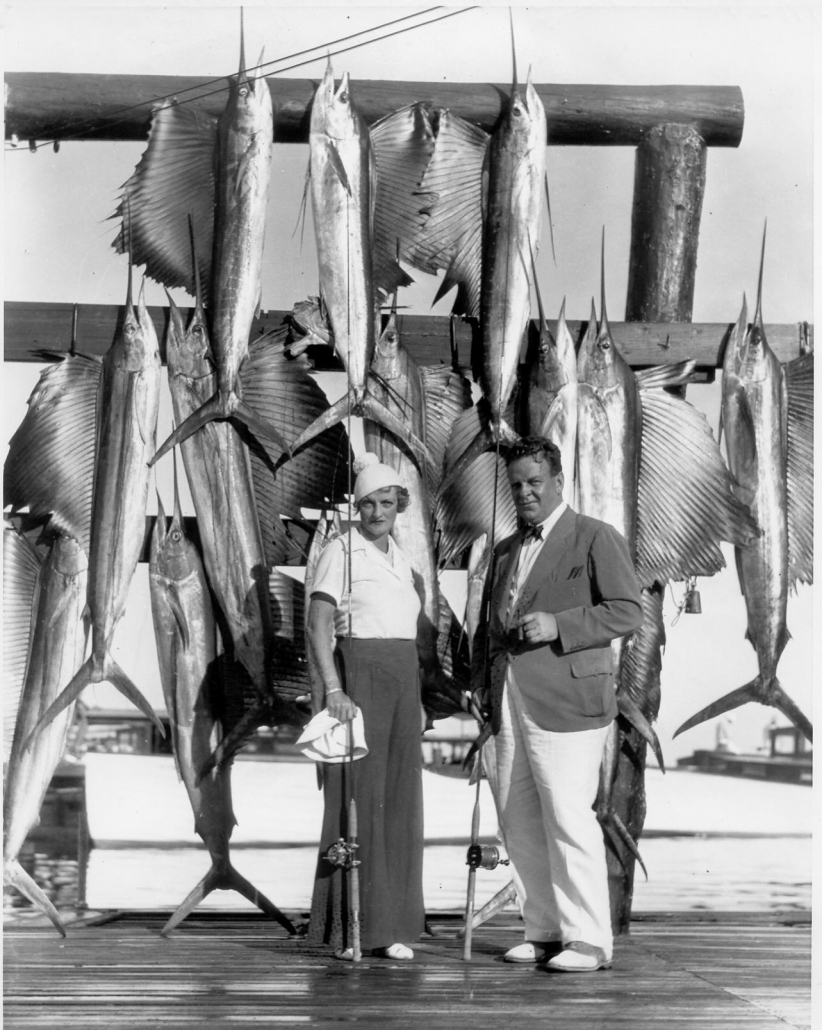 In the days before catch and release and the release mount movement, photos like this were the norm. Photo courtesy King Sailfish Mounts.These days, King Sailfish Mounts makes perhaps the best fish replicas in the business. Their tasteful recreations bring joy to thousands of anglers—reconnecting each to the thrill of a lifetime every time they look at the wall.

There is an incredibly interesting man with a very interesting story behind these mounts. This is that story.

The Man Behind the Mounts

Raymond “Doug” Douglas is one of the coolest and most interesting people in fishing. He is also the founder and president of King Sailfish Mounts. 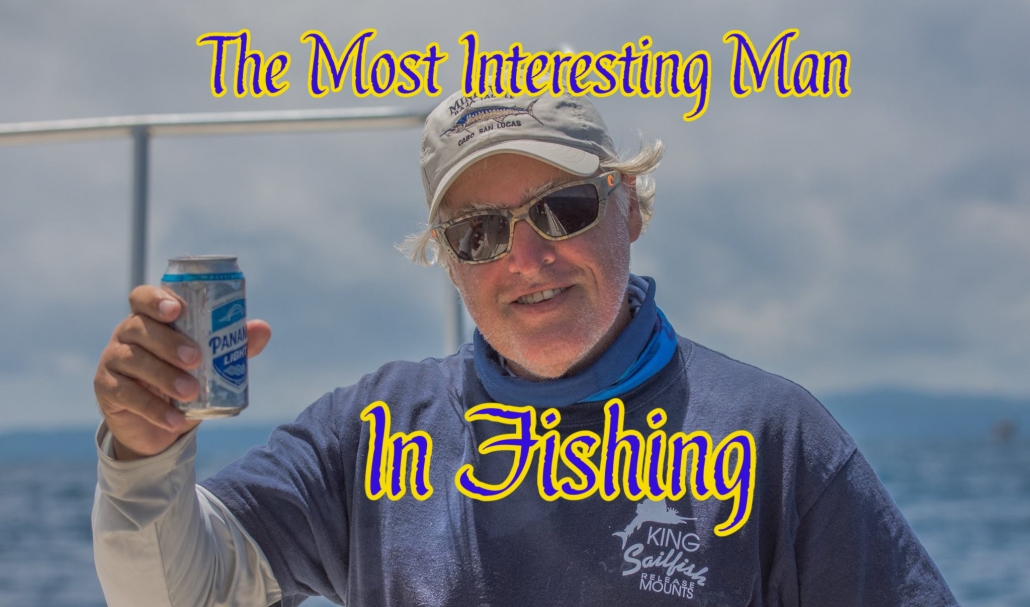 An intensely smart man, Doug’s intellectual pursuits range from electric vehicle technology to perfecting the base paint layer on a tarpon mount. Doug’s refreshing approach to enjoying life on his own terms is such that if he offered life coaching lessons, you’d be wise to enroll.

He is a passionate fisherman whose adventures are the stuff of legend. Douglas fishes the Everglades tarpon season each year, navigating the backcountry of Flamingo and Florida Bay expertly on his skiff—sometimes disappearing into the swamp by himself for days at a time. He also camps in remote stretches of the Bahamas—catching lobsters and enjoying life—with his Contender as basecamp.

Douglas has fished Panama, Hawaii, Puerto Rico, Guatemala, Prince Edward Island, Costa Rica and other of the world’s premier fisheries. A humble, fascinating man, Doug would never tell you about how the business he started from his garage has grown into a global empire—hired to populate such places as Bass Pro Shops, restaurant chains and the IGFA Museum with his beautiful creations. 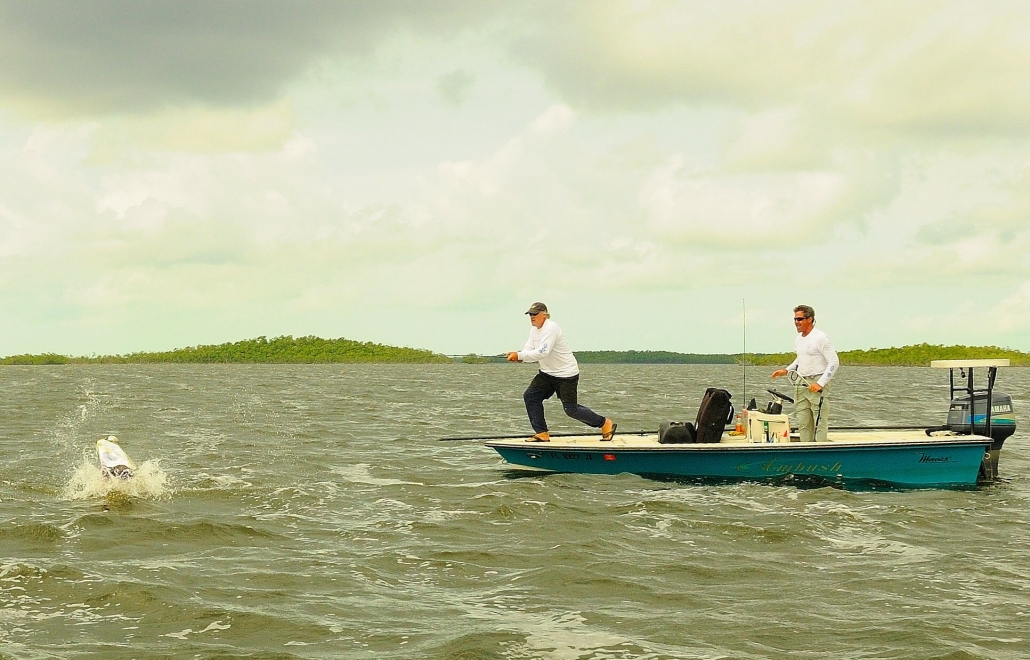 Doug doing what he does best… catching big tarpon in the Everglades. Photo by Dr. Jiangang Luo.

Doug is such an interesting and cool guy that it’s hard to select a favorite story about him. Really…

He nearly missed his first wedding anniversary when he foul hooked a 200-pound blue marlin on light spinning tackle a couple miles off of the beach in South Florida. He fought the thing for 23 hours– by himself– before it rubbed through the line…

During the fight, his boat ran out of gas. In the days before cell phones, Doug had to anchor the boat beyond the surf and swim to shore. As he dragged himself, sun burned and exhausted (and late for his wedding anniversary) onto the beach, he was swarmed by customs agents!

Then there was the time he fished in a remote, mothership operation in Panama’s Pearl Islands. One day he caught a 400-pound black marlin offshore, the next he toured small and isolated villages on the islands by himself from a kayak. He was equally satisfied in both pursuits.

Become a part of The Billfish Foundation

Raymond Douglas is, however, much more than just a cool, interesting guy. His work and vision have saved thousands of sailfish, marlin, sharks and tarpon from the landfill. His business model has also fundamentally changed how sportfishermen approach commemorating their catch. 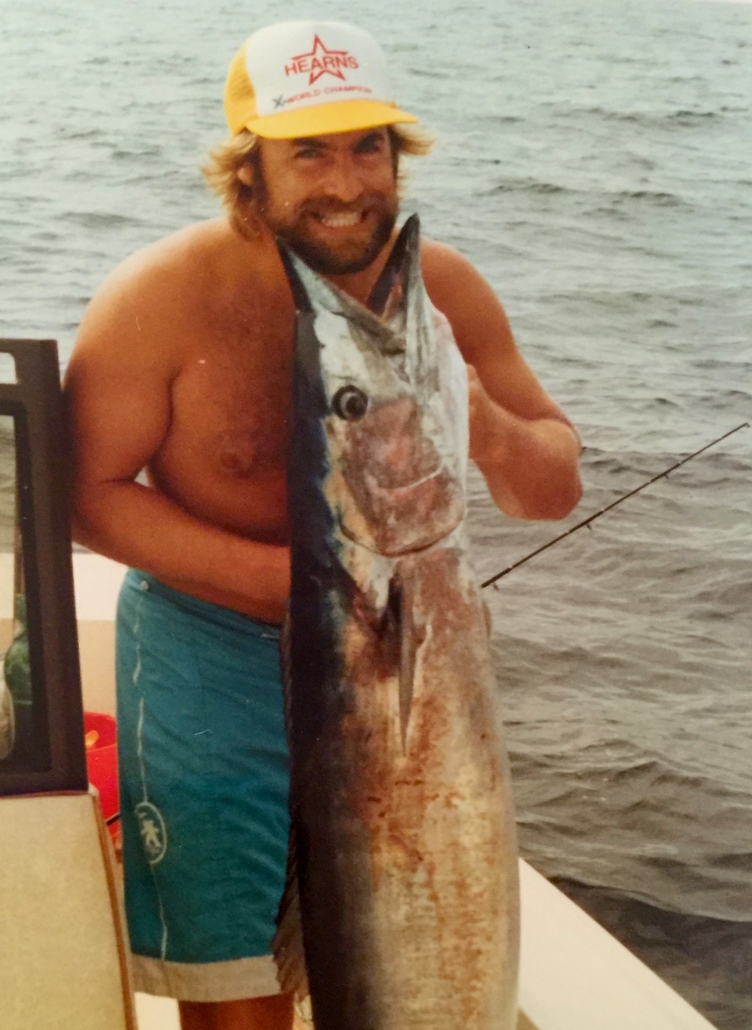 A young Raymond Douglas with a nice wahoo.

King Sailfish Mounts is credited with coining the term “release mount.” While today we all take for granted that you can release your fish and still get the mount, this was not always the case.

King Sailfish Mounts is one of the great economic examples of how well doing things efficiently and sustainably can pay. He set about not only providing a more reasonable alternative and changed the market in the process.

Rather than greasing every fish to be mounted—in the way of old—King Sailfish created fiberglass molds of fish of various sizes (i.e. 60, 80, 100, 120 and 150 pound tarpon) to use for mounting options.

A cross section of the cool things that King Sailfish makes… 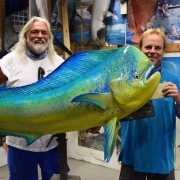 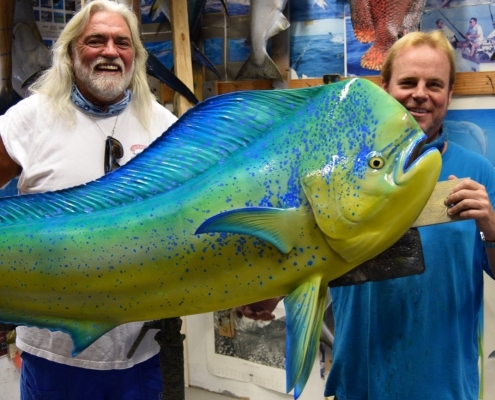 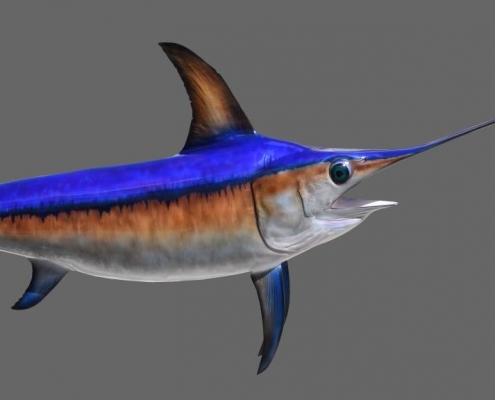 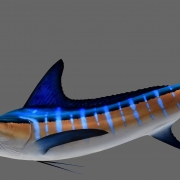 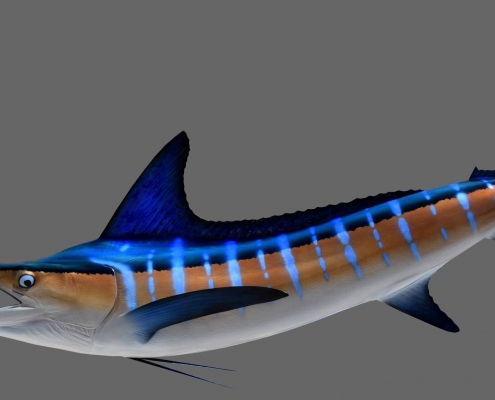 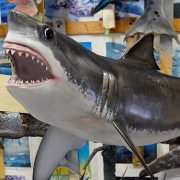 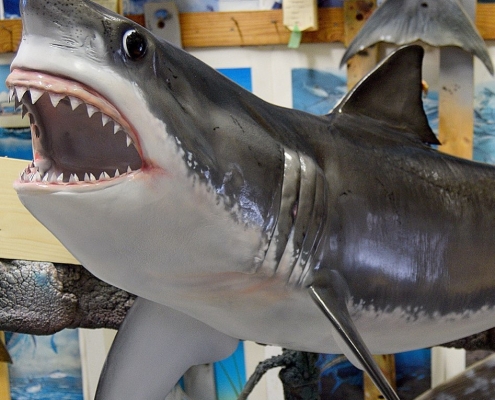 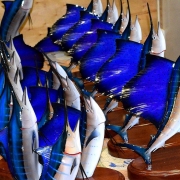 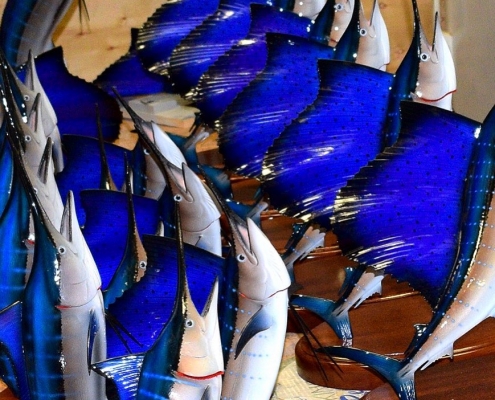 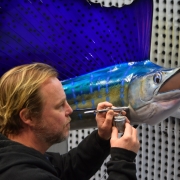 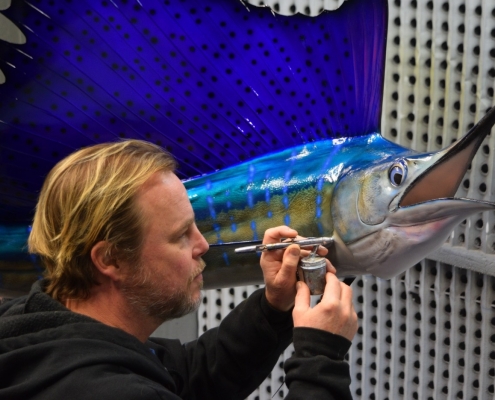 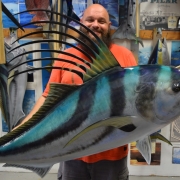 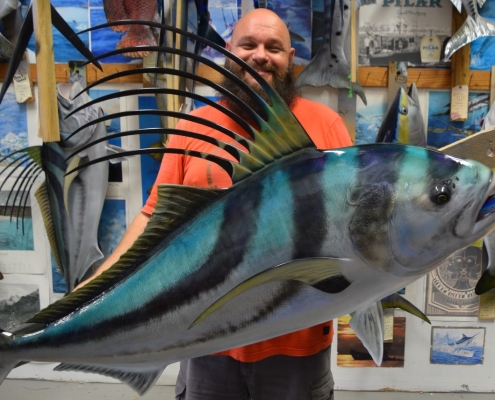 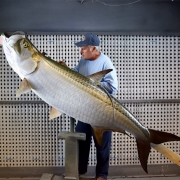 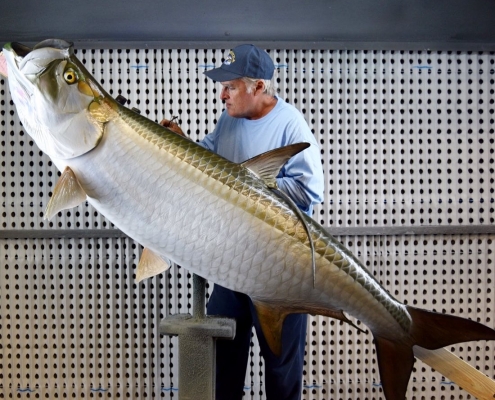 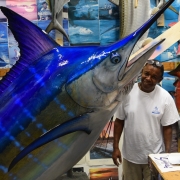 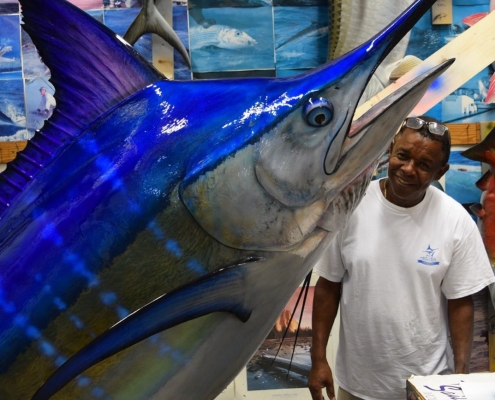 Customers could then measure, photograph and release their fish and order a mount created from a previously harvested fish. The release mount was born.

“I have spent the past 30 years ‘living the life.’ I started King Sailfish Mounts, Inc at home in my garage.  At the time, hundreds of metric tons of beautiful gamefish were being killed by the charter fleet each year for mounting for south Florida tourists,” describes Douglas.

Were it not bad enough that so many fish were being harvested to mount them—their harvest was not even necessary for the process. “Taxidermists were not using the fish — they were being tossed in dumpsters and taken to landfills.  Mounts were being produced using 100% composite materials even back then — it was cheaper and you couldn’t tell the difference.  So fish were being killed only to convince tourists to get their fish mounted and to leave a deposit,” says Douglas of his inspiration.

The TBF Experience profiles the lifestyle and excitement made possible by billfish conservation. For more, click on the image.

“Releasing fish might confuse the customer making it less likely for them to order a mount.  Taxidermists were paying huge commissions to charter captains to get the sales and in fact, captains were earning more by selling a mount than they were making on the charter itself.

“This was a situation that was not sustainable.  It was border-line criminal.  I saw this as a business opportunity…to introduce the release mount concept and create an awareness among conservation minded anglers, helping to save sailfish, marlin and sharks in the process,” Douglas recounts.

How have things progressed in the past three decades? “When we started, nearly every fish mount produced in south Florida was based on a dead fish.  Now that sportsmen have become more aware, nearly all mounts are based on a released fish.  And we have produced and sold many thousands of fish mounts since inception,” Doug explains. 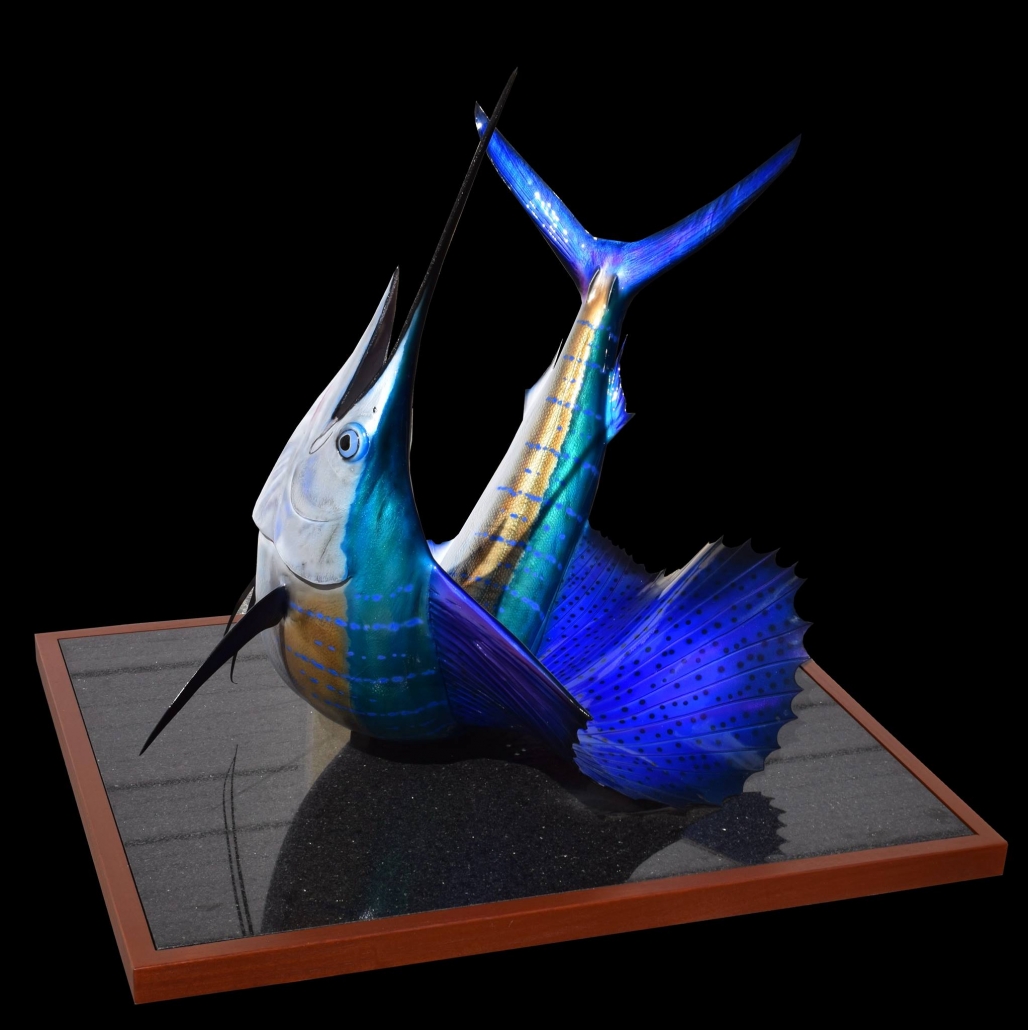 King Sailfish Mounts: recognized around the world for the beauty and quality of their work.

“Although truthfully we were just a small part of the conservation movement in sportfishing, we have been credited for coining the term ‘release mounts’ and are highly regarded and continue to be promoted by the most notable brands in the industry including TBF,” Douglas concludes with a combination of thankfulness and humility.

The next time you feel like bringing the excitement of catching marlin into your living room, call King Sailfish Mounts. Not only will you get the best mount in the business, but you’ll support conservation and a business that changed our approach to releasing fish forever.

While you’re at it, thank them for all that they’ve done for all of us.

Get up to date information on events, news, and research on a constant basis. Submit your email now to join our exclusive newsletter.
Introducing the TBF Experience

The Fishing Life and Legacy of Jack Duvall
Scroll to top