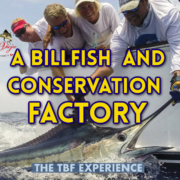 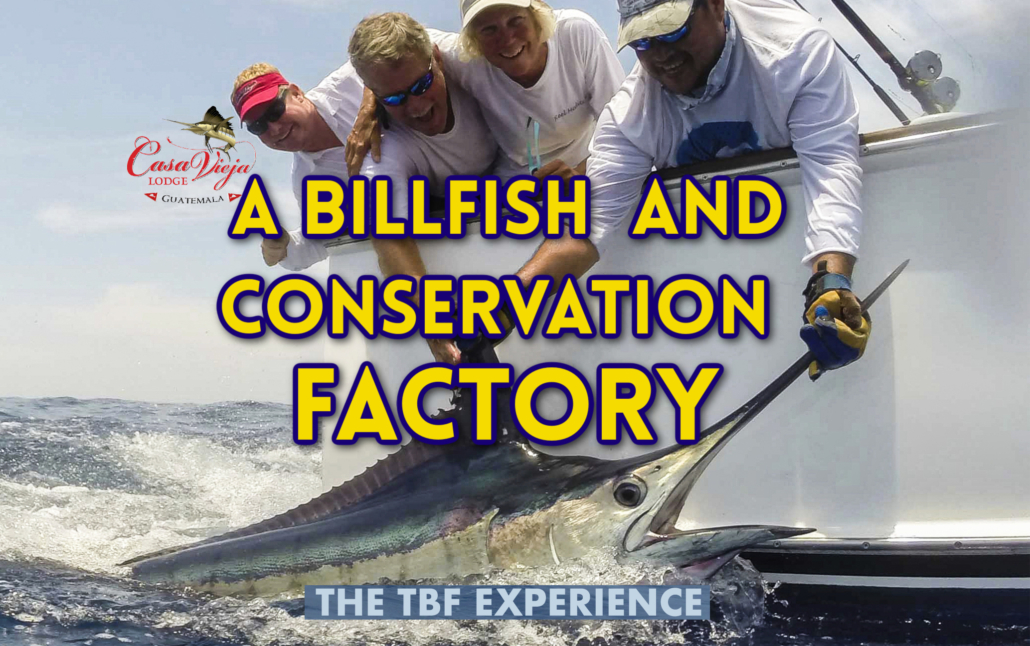 When you think about Guatemala’s Casa Vieja Lodge and the tens of thousands of billfish it releases every year, you could be forgiven for thinking that it was some big corporate outfit. After all, the Lodge owns and operates a fleet of 10 of the finest classic charter boats that you’ll find anywhere. In 2019, this fleet fished an incredible 1894 boat days—raising some 20,049 billfish and releasing 12,215. 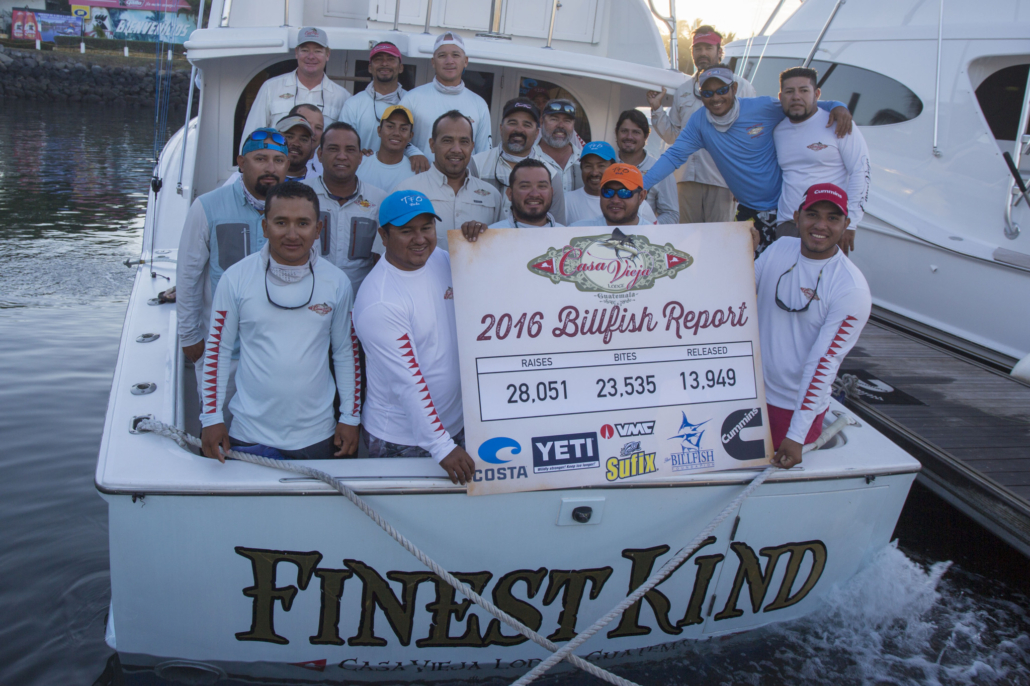 Add to these incredible numbers, the consistency of the Lodge’s guest experience is remarkable. A full service, all-inclusive operation—Casa Vieja handles everything from the time that its thousands of yearly guests exit the airport in Guatemala City until their drivers drop them off again. The food, the tackle and gear, the boats, the cockpit crews—everything that the lodge does is consistently first class.

Casa Vieja Lodge is also remarkable for its commitment to doing good. The lodge is a prominent member of the Kick Plastic Campaign—a ground breaking program that eliminates single use plastic containers from sportfishing operations. Casa Vieja also has a long and innovative tradition of supporting The Billfish Foundation—both through program sponsorship and through its adherence to catch and release billfishing. 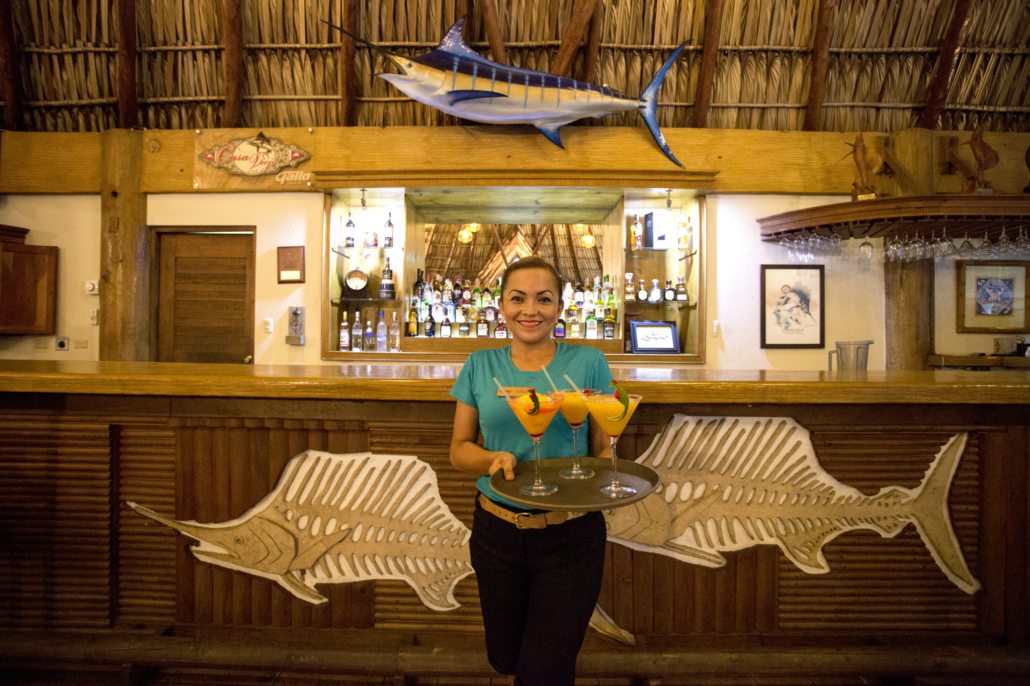 The lodge employs some 45 people—providing good, long term employment options for residents of Puerto San Jose, Guatemala. That the lodge treats its people well is evident in the lack of turnover—two employees have been working here for 21 years. Yes, there is much to like about Casa Vieja Lodge—and much more to the operation than meets the eye.

Casa Vieja Lodge is a family business owned by Captain David and Kristen Salazar. Captain David Salazar first came to Guatemala in 1998 while working for Tim Choate at the original Fins and Feathers—the operation responsible for establishing Guatemala’s spot on the international sportfishing landscape. 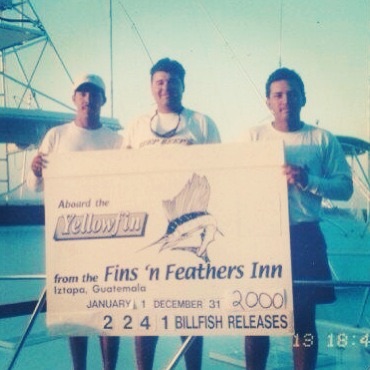 A young Captain David Salazar, center, in the early days of his adventures in Guatemala.

All of the attention to detail—all of the care for the classic fleet of sportfishers (Casa Vieja Lodge performs all of its own boat maintenance and repair in house)—results not from a giant corporate budget, but rather from a team of skilled professionals that understand fishing and care a great deal. Captain David Salazar is a professional captain whose background is in sportfishing. Before coming to Guatemala, he ran boats in South Florida, the Caribbean and Venezuela. He’s a fisherman through and through—a captain’s captain.

Kristen’s background, on the other hand, has little to do with fishing. Growing up in Hawaii, Kristen learned early of the importance of conservation, sustainability and the importance of taking care of resources with an eye for future generations. Kristen holds an MBA and specializes in applying the best in organizational and marketing practices in a way that is seldom present on the fishing landscape. 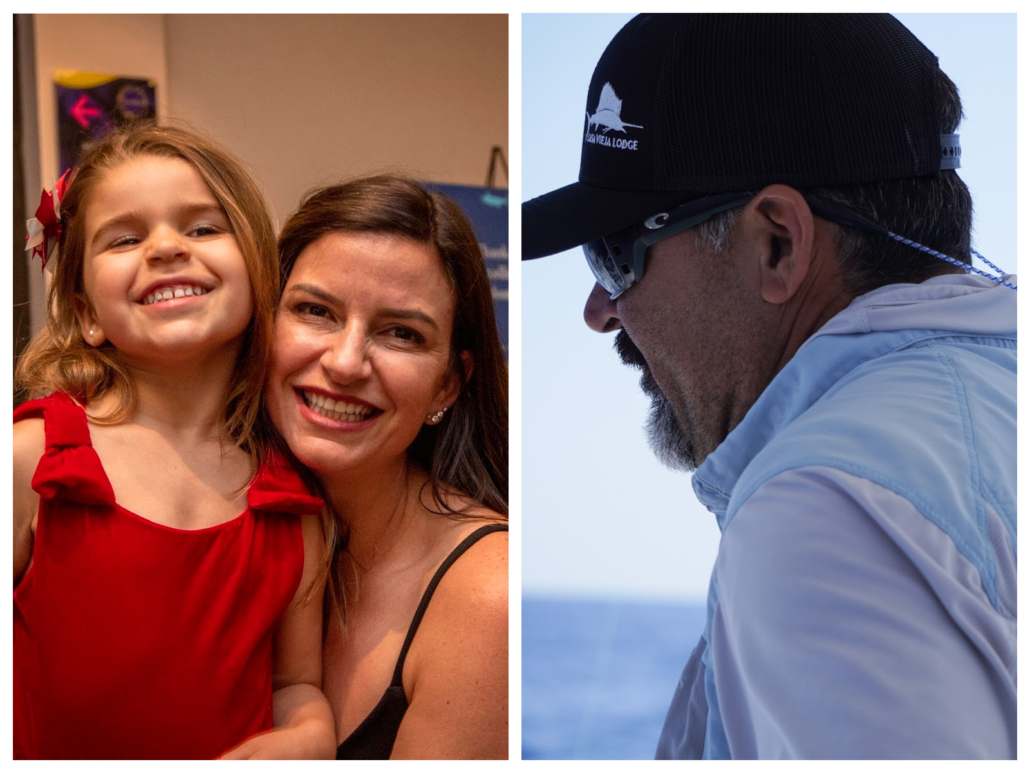 The result of their combined skillset and dedication is a well-rounded approach ably equipped to handle the many variables related to an international sportfishing operation. The Salazars and the team at Casa Vieja Lodge are not only well attuned to the needs of clients when they are on the premises, but also the innerworkings of the sportfishing industry generally.

Many people and places claim to be conservation-friendly. Few enterprises, however, back up their words with actions as thoroughly as Casa Vieja Lodge. First, consider the number of billfish that Lodge boats catch every year—and who is catching them. Year in, year out Casa Vieja Lodge catches more than 10,000 billfish. Each and every one of these fish is released. 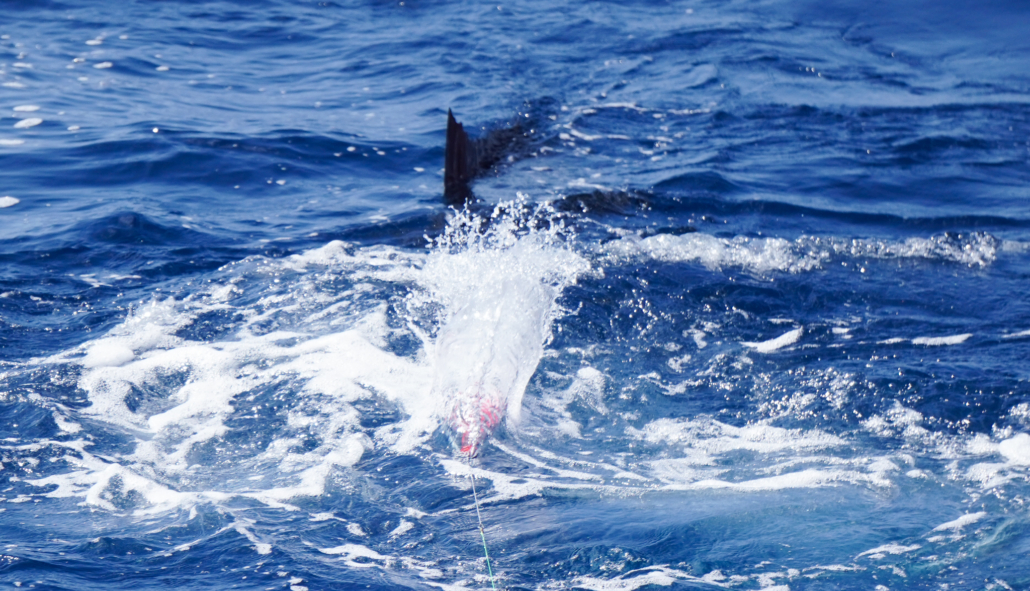 Guests at Casa Vieja Lodge learn not only how to pitch bait sailfish and marlin, but how to conserve them.

While experienced billfish anglers frequent the Lodge, many of those catching and releasing these sailfish and marlin are first timers. This is an important point. There are plenty of places in the world—especially those that cater to inexperienced billfish anglers—that attempt to convince clients to harvest their sailfish or marlin. Most of these operations either try to sell them a mount (you don’t need to kill a fish for a release mount) or try to sell the fish commercially.

By practicing purely catch and release, Casa Vieja Lodge establishes this as the norm for all of 2,500 or so people who fish them every year—including those who catch their first billfish in Guatemala. Wherever these clients fish—they will have been introduced to circle hooks, catch and release and all of the things associated with the modern sportsman’s billfishing ethic. This is how grassroots conservation propagates—from angler to angler.

The Economics of Conservation

Casa Vieja Lodge also understands the relationship between keeping healthy sailfish and marlin populations and sportfishing tourism. Kristen Salazar describes the connection, “I’m born and raised in Hawaii. Growing up we had a strong emphasis in conservation and environmentalism. Things like recycling and sustainability with an eye for future generations are part of that.”

This influence translates directly to billfish conservation. “When we learned of TBF and that Tim Choate was involved in TBF’s founding, it just made sense for us to be a part of that. TBF is the best—and really only program—for us to be part of. Being a sponsor of the Tag and Release program was only natural—that’s what we do… in the thousands,” Kristen continues. 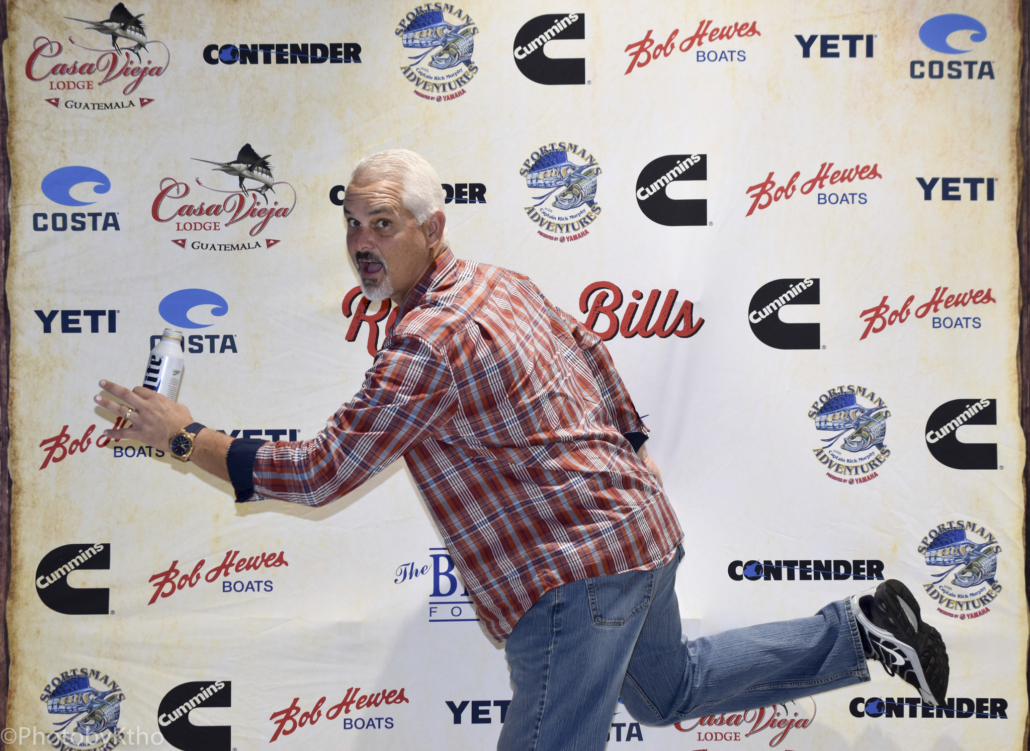 The Raising Bills event is a night of great fun while generating support for the work of The Billfish Foundation.

Casa Vieja Lodge not only sponsors The Billfish Foundation’s tag and release program and annual awards, but takes its support for conservation a step further. Casa Vieja Lodge organizes an event at the Miami Boat Show each year known as Raising Bills. The event hosts a who’s who of the sportfishing industry, all the while raising money for TBF.

Kristen describes hearing stories of parties at boat shows in the old days and decided to bring the tradition to life once again. “Raising Bills is what we do for a living,” Kristen says—speaking of the thousands of marlin and sailfish the lodge raises each year. The Raising Bills for TBF brings the commitment full circle.

What’s Next for Casa Vieja Lodge

As the world emerges from its Pandemic haze, Casa Vieja Lodge will continue to catch and release thousands of sailfish and marlin from its Guatemalan world headquarters. It will, however, add some interesting options to its fishing portfolio. 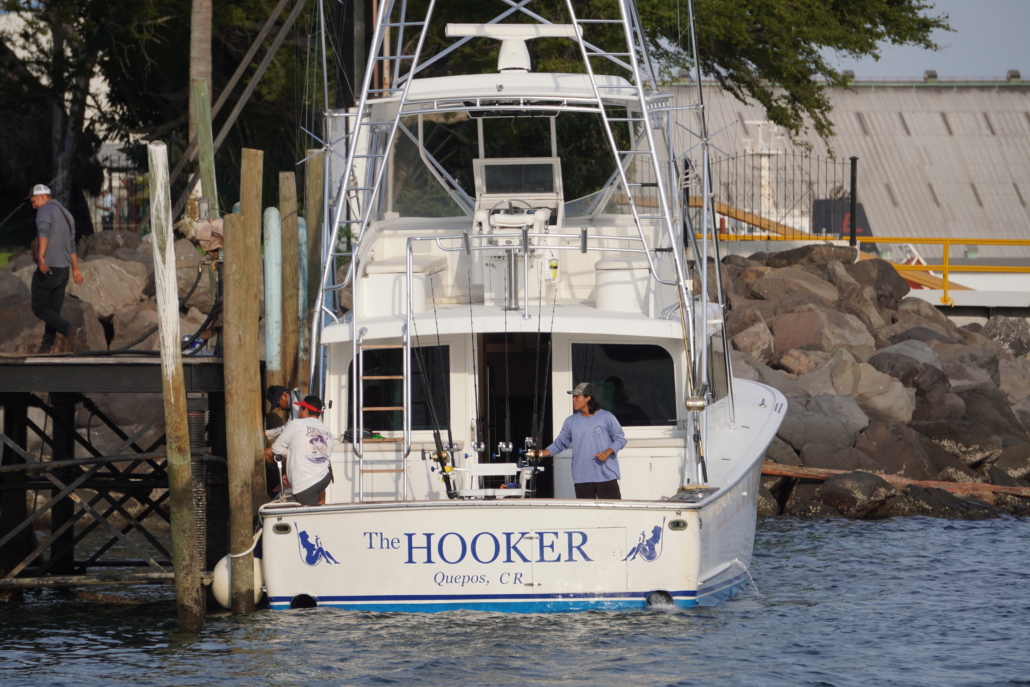 In January of this year, the Salazars purchased the Hooker—the classic 48 G&S—from Capt. Skip Smith. The Hooker will provide the platform to fish the FADs out of Quepos, Costa Rica. Casa Vieja’s Costa Rican branch will launch later this year.

The future is certainly bright for the Casa Vieja Lodge.  To keep up with their latest developments—or to book a trip—visit:

Get up to date information on events, news, and research on a constant basis. Submit your email now to join our exclusive newsletter.
Anatomy of The Bait and Switch

Costa and TBF: A Force for Good
Scroll to top